F. Michael Maloof is a writer for the right-wing WorldNetDaily (WND). Maloof previously worked as an analyst in a controversial Pentagon policy outfit called the Office of Special Plans, whose work was the subject of various investigations because of allegations that it produced inaccurate intelligence aimed at justifying the invasion of Iraq.[1] In December 2001, Maloof was stripped of his security clearance and forced to go on leave apparently as a result of his connections to a Lebanese-American businessman named Imad El Haje, who was being investigated for his alleged involvement in a gun-running scheme to Liberia.[2]

In 2013, Maloof published a fear-mongering volume for WND Press about the purported threat to the United States of a possible electromagnetic pulse (EMP) attack. Titled A Nation Forsaken: EMP: The Escalating Threat of an American Catastrophe, the book’s website states: “The threat from an electromagnetic pulse attack on our critical infrastructures either from an impending solar storm of serious intensity expected between 2012 and 2014 or a high-altitude nuclear explosion are threats that could have long-term catastrophic consequences for our society and our way of life.”[3] According to WND Press, the book reveals how the threat can “be managed if government at the federal, state and local levels gives a high priority to undertake preventative action to lessen its impact to recover from it. Given what seems to be a perpetual gridlock in Congress, however, don’t count on it.”[4] 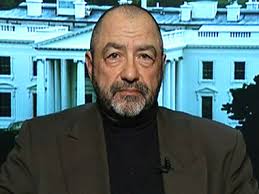 (Experts have expressed skepticism about the gravity of the purported EMP threat. For discussions on the confluence of ideological and corporate interests behind the EMP threat industry, see the Right Web Profile “EMP Commission” and Robert Farley, “The EMP Threat: Lots of Hype, Little Traction,” Right Web, October 16, 2009.)

Since publishing his EMP book, Maloof has written a string of articles for WorldNetDaily hyping apparently new and emerging EMP threats to America. The blog WND Watch, which obsessively tracks the work of WorldNetDaily, reported in February 2014: “Much like Chicken Little claiming that the sky is falling, E. Michael Maloof still gets his EMP (electro-magnetic pulse) weapon warning in every few weeks. I wonder if he writes anything else for WND? His latest two were published on January 30 and February 10, and there was a third snippet of an article on February 14: China Reveals ‘Ace’ Against U.S. Military, Approaching Iranian Warships Raise EMP Threat, and Expert: Iran Ships a Dry Run for Later Nuke/EMP Attack. Maloof is also an occasional guest on the late-night radio program, Coast to Coast AM, also talking about this threat.”[5]

Maloof has contributed to various conservative media outlets, including the G2 Bulletin, a subscription-only “independent, online intelligence resource” that is published by the right-wing WorldNetDaily (WND). In May 2011, WND announced in a press release that Maloof had been named a “senior reporter” in its Washington bureau.[6]

The WND press release stated that Maloof had been employed by the Defense Department as a “specialized trainer for border guards and Special Forces in select countries of the Caucasus and Central Asia” and as the Pentagon’s “director of Technology Security Operations.” It added that he had “provided combat tracking training to U.S. Marines and has a background in executive protection, intermediate and advanced evasive and defensive driving, basic and advanced route analysis, surveillance detection and attack recognition, as well as off-road driving.”[7]

WND also claimed that Maloof had significant previous journalism experience, having worked for the Detroit News, U.S. News & World Report, and the Union Leader.[8] However, Terry Krepel, a contributor for the liberal Media Matters, contested these claims on his ConWebBlog, writing: “WND claims [Maloof] was ‘a special correspondent for the Detroit News,’ but searches of Google and Nexis turn up no Detroit News articles under his name. WND also notes that Maloof was ‘Washington correspondent for the Union Leader in Manchester, N.H.,’ but that appears to have been three decades ago; a December 1981 UPI article (found via Nexis) states that at the time he was working as a part-time correspondent for the Union Leader, Maloof was also on the payroll of the Commerce Department writing ‘issue papers’ in the office of assistant commerce secretary Lawrence J. Brady. Maloof ultimately quit the government job to avoid a conflict of interest. An October 1983 UPI article (via Nexis) noted that Maloof ‘praised Brady in his articles,’ and at the time of the article had apparently left the newspaper and was working for Richard Perle, then an assistant defense secretary in the Reagan administration.”[9]

(In March 2014, a Right Web reader wrote the project to complain that the claims made in the Media Matters article were in error because she was able to track down an article Maloof wrote for Detroit News in the mid-1970s.)

In addition to writing about the EMP threat for WND, Maloof has addressed the controversy over the People’s Muhajedin of Iran (Mojahedin-e Khalq-e Iran, or MEK), an Islamic and Marxist-inspired militant organization that advocates the overthrow of the Islamic Republic of Iran. Listed for many years on the State Department’s terrorist watchlist, the MEK has been supported by a number of elite current and former policymakers, as well as several well-known neoconservative figures.[10]

In his award-winning book Assassins Gate: America in Iraq, George Packer recounts Maloof’s role working with a passel of neoconservative figures to produce faulty intel after the 9/11 attacks. According to Packer, Maloof and David Wurmser were the key analysts in the Counter-Terrorism Evaluation Group, which was set up by Douglas Feith and the Deputy Secretary of Defense Paul Wolfowitz to ferret out damaging intelligence about Iraq. Wurmser and Maloof “collected raw data, much of it from defectors provided by the Iraqi National Congress [led by Ahmed Chalabi], in order to prove an assumption: that Saddam Hussein had ties to al-Qaeda and was likely to hand off [weapons of mass destruction] to terrorists. Wurmser and Maloof were working deductively, not inductively: The premise was true; facts would be found to confirm it.”[11]

Although the Wurmser-Maloof team was eventually disbanded, according to Packer, its work “was absorbed” into the Office of Special Plans, which had been set up by Feith under the leadership of his assistant William Luti and established Straussian scholar Abram Shulsky as an annex to the Pentagon’s Office of Near East and South Asian’s (NESA) Northern Gulf Directorate, ostensibly to develop planning on post-war Iraq. Packer reports that the OSP brought in a number of outside consultants who were considered “experts” on the Middle East to help the office “think through the politics of postwar Iraq.” These included Michael Rubin and Harold Rhode, an acolyte of Bernard Lewis who worked in the Office of Net Assessment, the Pentagon’s in-house think tank.[12]

According to Packer, Wurmser and Maloof’s work became “bullet points on policy papers and PowerPoint slides, and then piped by Luti and Shulsky directly to the White House, where the neoconservatives had allies in Vice President Dick Cheney’s chief of staff, I. Lewis ‘Scooter’ Libby, and [Condoleezza Rice’s] NSC director for the Middle East, Elliott Abrams.”[13]

Comments Packer: “Just as the new methods of analyzing intelligence evaded the cumbersome requirements of vetting, this configuration of like-minded officials dispersed on key islands throughout the national security archipelago allowed the intelligence ‘product’ and its effect on policy to circumvent the normal interagency process.”[14]

In a widely noted article for the New Yorker, investigative journalist Seymour Hersh argued that this policy outfit “was created in order to find evidence of what Wolfowitz and his boss, Defense Secretary Donald Rumsfeld, believed to be true—that Saddam Hussein had close ties to al-Qaida, and that Iraq had an enormous arsenal of chemical, biological, and possibly even nuclear weapons that threatened the region and, potentially, the United States.”[15] Based on his interviews with former and current intelligence officials, Hersh concluded that the office "rivaled both the CIA and the Pentagon's own Defense Intelligence Agency, the DIA, as President Bush's main source of intelligence.”[16]

Maloof’s role in the Pentagon intel shop came to an abrupt end in December 2001 shortly after his connections to Lebanese-American businessman Imad El Haje came to light.[17] El Haje, who was under investigation by the United States for involvement in a gun-running scheme to Liberia, reportedly served as a middle man between the Saddam Hussein regime and the Pentagon, funnelling messages from Saddam to Maloof, who in turn passed them on to Richard Perle, then head of the Pentagon’s Defense Policy Board. According to one account, “El Haje, relayed word that Saddam would allow U.S. experts and troops into Iraq to verify that he had no weapons of mass destruction …  through a Department of Defense official, F. Michael Maloof, who was involved in a Pentagon effort to find links between Saddam and Osama bin Laden, and Richard Perle, the head of a Pentagon advisory panel who was a leading advocate of invading Iraq. U.S. officials said none of the approaches went anywhere. They were deemed either fraudulent or attempts by Saddam to stall for time to allow international opposition to a U.S.-led attack to build, they said.”[18]

After Maloof’s security clearance was revoked, “several individuals close to Defense Secretary Donald H. Rumsfeld came to his defense and wrote supporting letters. … They included Undersecretary of Defense Douglas Feith, the Pentagon's No. 3 civilian, who oversees the Office of Special Plans, and Richard Perle, a top outside adviser and former chairman of the influential Defense Policy Board.”[19]