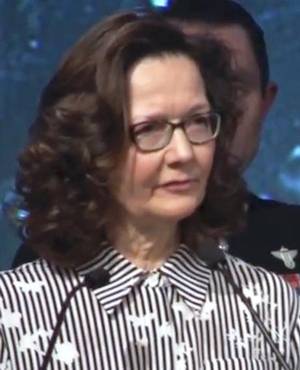 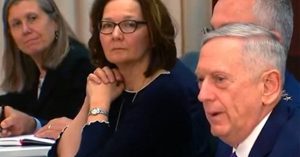 Haspel’s confirmation split both Republicans and Democrats in the Senate. In the final tally, two Republicans voted against her and a third, John McCain (R-AZ), made his opposition to Haspel clear although he was unable to vote due to illness. Conversely, six Democrats voted against the rest of their party to confirm her. The splits were due to concern about torture, offset by Haspel’s excellent reputation among fellow CIA agents. Her assurance that she would not reinstate the CIA’s torture programs won over some reluctant senators.

In a letter to Sen. Mark Warner (D-VA), Haspel wrote, “With the benefit of hindsight and my experience as a senior agency leader, the enhanced interrogation program is not one the C.I.A. should have undertaken. The United States must be an example to the rest of the world, and I support that.” This seemed to win over Warner and several of his Democratic colleagues as well as a few Republicans who had been on the fence about her confirmation.[2]

In October 2018, as pressure was building on Saudi Arabia over the murder of journalist Jamal Khashoggi in the Saudi embassy in Istanbul, Haspel journeyed to Turkey to examine the evidence the Turkish government had gathered. While many were curious about what she had discovered, Haspel briefed Trump and Pompeo but otherwise kept whatever she had learned classified.[3] This raised suspicions, as most in Congress from both parties, the media, and the general public believed that the very top of the Saudi royal family was behind Khashoggi’s murder and the president’s insistence on defending the Saudis—a defense which had already been proven incorrect when the Saudis admitted after some time that Khashoggi had been killed in their embassy, a pretense Trump had said he believed—was casting him in a very poor light. That view become even dimmer when an intelligence assessment from several agencies stated that they were confident that the effective ruler of Saudi Arabia, Crown Prince Muhammed bin Salman (MBS), must have at least known about the killing.

When the Senate scheduled a closed-door briefing on the Khashoggi matter, only Pompeo and Defense Secretary Jim Mattis were sent to testify. This renewed bipartisan anger and led to accusations that the White House was actively preventing Haspel from testifying, something that would typically be the role of the highest-ranking intelligence officer involved in an international incident such as this. National Security Adviser John Bolton denied that Haspel was prevented from testifying but offered no alternative explanation.[4] The White House continued to insist that there was no evidence linking the top Saudi leadership to the killing. After the Senate rebuked Trump in a very unusual bipartisan vote that reduced U.S. support for the Saudi war effort in Yemen, Trump relented and allowed Haspel to testify to Senate leaders in a closed-door hearing.[5]

The contents of Haspel’s briefing remained classified, but the reaction of the senators who attended indicated her testimony had been explosive. One of Trump’s strongest Senate supporters, Lindsey Graham (R-SC), said that MBS “is a wrecking ball. I think he is complicit in the murder of Khashoggi in the highest possible level.” The chair of the Senate Foreign Relations Committee at the time, Bob Corker (R-TN) declared, “I have zero question in my mind that the crown prince ordered the killing, monitored the killing, knew exactly what was happening. If he was in front of a jury, he would be convicted in 30 minutes.”

Through most of her initial months in office, Haspel kept her profile low, avoiding the media and staying out of the frequent clashes between Donald Trump and the intelligence services. But in January 2019, she testified in an open hearing in the Senate in an annual intelligence briefing on their assessment of global threats. Characteristically, Haspel was not the one to make headlines. But she did generally agree with her colleagues in her remarks that Trump’s view of the global situation was off the mark. For example, asked about Trump’s view that the United States had defeated the Islamic State, Haspel said that ISIS was still dangerous, with “thousands of fighters in Iraq and Syria.”[6] Haspel also told the senators that Iran was still in compliance with the nuclear deal Trump had unilaterally withdrawn the United States from. But, she added, they were considering pulling back from it if they continued to see little or no benefit from staying.[7]

Haspel also told the senators that, contrary to Trump’s frequent claims, North Korea “is committed to developing a long-range nuclear-armed missile that would pose a direct threat to the United States.”[8] All of these items directly contradicted Trump’s public statements and implied that his direction of foreign policy was uninformed and invited negative outcomes.

Trump tweeted his displeasure with his intelligence chiefs. “The Intelligence people seem to be extremely passive and naive when it comes to the dangers of Iran. They are wrong! When I became President, Iran was making trouble all over the Middle East, and beyond. Since ending the terrible Iran Nuclear Deal, they are MUCH different, but a source of potential danger and conflict. They are testing Rockets (last week) and more and are coming very close to the edge. There [sic] economy is now crashing, which is the only thing holding them back. Be careful of Iran. Perhaps Intelligence should go back to school!”[9]

But Haspel managed to escape most of Trump’s wrath. In the wake of the testimony from Haspel, FBI director Christopher Wray and Director of National Intelligence Dan Coats, it was Coats whom many feared would lose his job. Wray had also endured Trump’s fiery public anger early in his term. But Haspel seemed able to find a balance between keeping Congress informed and staying out of the president’s line of fire. In February 2019, former CIA director Michael Hayden noted that Haspel had agreed with Coats in their testimony, yet she didn’t face the same response. “I think Gina is just trying to get out of the way and weather it. Trying to lie low maybe,” he said. But he also expressed concern that Trump’s frequent dismissal and berating of U.S. intelligence officials endangers Haspel’s position and that “If this goes on four more years, it will be really catastrophic.”[10]

Haspel served as chief of base of a CIA black site—a secret prison in Thailand where detainees were subjected to torture and other unlawful abuse according to the Senate Select Committee on Intelligence’s Study of the CIA’s Detention and Interrogation Program. There, she directly oversaw the interrogation of a prisoner named Abd al Rahim al-Nashiri’s using so-called “enhanced interrogation techniques,” including waterboarding, according to Rob Berschinski,

the senior vice president for policy at Human Rights First and the former deputy assistant secretary of state for democracy, human rights, and labor.

Berschinski wrote, “According to a May 2004 report from the CIA’s Inspector General, Haspel may have had involvement in the application of ‘enhanced interrogation techniques,’ that ‘went beyond the projected use of the technique as originally described by [the Justice Department (DOJ)]’ (which, it should be added, DOJ later opined ‘[were] not significant for purposes of DOJ legal opinions’).”[11]

When she was nominated to head the CIA, Sen. John McCain (R-AZ), himself a victim of torture when he was a prisoner of war, expressed strong reservations. “The torture ofdetainees in U.S. custody during the last decade was one of the darkest chapters in American history,” McCain said. “Ms. Haspel needs to explain the nature and extent of herinvolvement in the CIA’s interrogation program during the confirmation process.”[12]

McCain was not alone in expressing reservations. Sen. Angus King (I-ME) said, “I do have some concerns because of her involvement, back early in the 2000s with the extraordinaryrendition and detention program and I want to understand what her role was.” Raha Wala of Human Rights First said, “No one who had a hand in torturing individuals deserves to everhold public office again, let alone lead an agency.”[13]

Democratic Sens. Ron Wyden (D-OR) and Martin Heinrich (D-NM) sent a letter to President Trump opposing Haspel’s nomination. Publicly, they said, “Her background makes herunsuitable for the position.”[15] But when she penned a letter to Senator Mark Warner (D-VA) stating that she felt the practice of torture had been wrong and she had no intention of reinstating it, she not only won over all but three Republicans, but a handful of Democrats as well.[16]

In June 2017, the European Center for Constitutional and Human Rights (ECCHR) filed a “legal intervention” with the German federal prosecutor requesting that Haspel face charges for the crime of torture. “Those who commit, order or allow torture should be brought before a court—this is especially true for senior officials from powerful nations,” said ECCHR’sGeneral Secretary Wolfgang Kaleck. “The prosecutor must, under the principle of universal jurisdiction, open investigations, secure evidence and seek an arrest warrant. If the deputydirector travels to Germany or Europe, she must be arrested.”[17] At the time of her nomination, German authorities were still investigating the charges.[18]

The incidents of torture at the CIA facility under Haspel’s authority were videotaped; in 2005, Haspel wrote the order directing the destruction of those tapes.[19]

Haspel spent much of her CIA career in the “Clandestine Services.” Thus, much of her record is not public. Her CIA bio states that “She has extensive overseas experience andserved as Chief of Station in several of her assignments.”[20]

In 2013, then-CIA Director John Brennan named Haspel interim director of the National Clandestine Service, but concern in the Senate stemming from her involvement in torture ledBrennan to nominate someone else for the permanent position.[21]

Haspel is the recipient of the George H. W. Bush Award for excellence in counterterrorism; the Donovan Award; the Intelligence Medal of Merit; and the Presidential Rank Award.[22]

[9] Cristina Maza, “Donald Trump Tells His Own Intelligence Chiefs To ‘Go Back to School’ Over ‘Naïve’ Assessment of ‘Dangers of Iran,’” Newsweek, January 30, 2019, https://www.newsweek.com/donald-trump-intelligence-twitter-iran-school-1311429

[12] Morgan Gstalter, “McCain: Trump’s CIA pick was involved in ‘one of the darkest chapters in American history,’” The Hill, March 13, 2018, http://thehill.com/blogs/blog-briefing-room/news/378183-mccain-trumps-cia-pick-was-involved-in-one-of-the-darkest