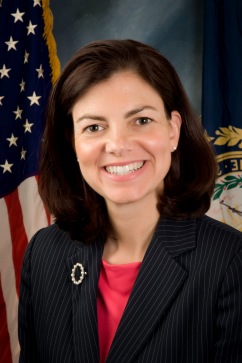 During her one term as Senator (2012-2016), Kelly Ayotte (R-NH) was known for her aggressive foreign policy militarism, which made her a favorite among neoconservative activists. Elected to the U.S. Senate in 2010 with support from high-profile GOP donors like the Koch brothers, Paul Singer, and Karl Rove‘s Crossroads super PAC, Ayotte’s relative youth, hawkish defense views, and right-wing bona fides led some observers to speculate that she could eventually become a presidential candidate.[1]

However, during her 2016 Senate re-election campaign, Ayotte was defeated by Gov. Maggie Hassan, with whom she sparred on both domestic and foreign policy issues. Ayotte’s favorable comments about GOP presidential nominee Donald Trump made her particularly vulnerable. During an October 2016 debate with Hassan, Ayotte called Trump a “role model” who could “serve as president.” However, after her comments were widely ridiculed by commentators, the senator walked them back, saying that “neither Donald Trump nor Hillary Clinton have set a good example, and I wouldn’t hold up either of them as role models for my kids.”

On domestic issues, Ayotte was a standard conservative Republican. She opposed abortion rights and same-sex marriage, and publicly sparred with gun control groups advocating background checks for arms purchasers in the wake of the Sandy Hook shooting. Although she supported a Senate bill for comprehensive immigration reform in 2013, she has also spoken in support of anti-immigrant bills in state legislatures, including Arizona’s infamous SB 1070. Like many of her GOP colleagues, she expressed skepticism about climate change and spoken out against minimum-wage protections and paid sick leave laws.[2]

But Ayotte was most visible as a foreign policy hawk, often invoking neoconservative rhetoric about American exceptionalism and confronting “evil.” “There is always a temptation to rationalize and discount evil, to disengage, to draw within ourselves, to isolate,” Ayotte told the Conservative Political Action Conference (CPAC) in 2013. “And that temptation has existed within every generation. As Ronald Reagan once said, whether we like it or not, it is our responsibility to preserve world peace because no one else can do it. And if there was ever a time in the history of our country to follow the path created by our great president Ronald Reagan, it is now. Ronald Reagan stood for peace through strength.”[3]

This kind of rhetoric won Ayotte admirers among leading neoconservatives like Weekly Standard editor William Kristol, who called her a “leader” on “defense and foreign policy.” In February 2014, Kristol—who famously helped catapult Sarah Palin to the 2008 GOP vice presidential nomination—estimated that Ayotte’s “prospects are good” for a potential 2016 vice presidential pick and even suggested that “she might want to look at running for the top job” herself.[4]

The Daily Beast’s Josh Rogin also said of Ayotte’s potential to be the running mate of the GOP presidential nominee: “Ask any two Republicans who their choice is for president in 2016 and you’ll get three answers; but when it comes to the GOP choice for vice president, there’s an emerging sense of agreement, especially in the establishment wing of the party: Senator Kelly Ayotte.”[5]

A protégé of former Sen. Joe Lieberman (I-CT), Ayotte was once described as a “third amiga” to Sens. John McCain (R-AZ) and Lindsey Graham (R-SC)—who, with Lieberman, famously comprised the “three amigos” who helped lead the Senate push for U.S. attacks on Iraq, Iran, Libya, and Syria. Lieberman, the neoconservative Democrat turned independent who retired from the Senate in 2013, said of Ayotte upon his retirement, “The amigos would certainly benefit from having a señorita as part of the group, and [she] would perhaps do a better job than I did at keeping those two rascals under control.”[6]

Ayotte was an early GOP cosponsor of a 2013-2014 Iran sanctions package introduced by Sens. Mark Kirk (R-IL) and Robert Mendendez (D-NJ). The legislation, which was supported by the American Israel Public Affairs Committee (AIPAC), threatened to impose new sanctions on Iran if certain conditions were not met in the course of negotiations over the country’s nuclear enrichment program. In a floor statement, Ayotte described the sanctions as “an insurance policy to make sure that Tehran does not play the United States of America, and to ensure that they are serious about stopping their nuclear weapons program.”[11]

Critics charged that the package imposed unrealistic restrictions on Iranian enrichment and might have violated a provision in the 2013 interim agreement between Iran and its international negotiating partners—including the United States—that banned the imposition of new sanctions while talks were underway.[12] Under pressure from the White House and activists who warned that the sanctions could scuttle the talks altogether, the bill was eventually pulled after failing to attract enough Democratic support. Ayotte subsequently signed onto a handful of more watered-down AIPAC initiatives, including helping to circulate an open letter asserting that the United States “must signal unequivocally to Iran that rejecting negotiations and continuing its nuclear weapon program will lead to much more dramatic sanctions, including further limitations on Iran’s exports of crude oil and petroleum products.”[13]

Ayotte denounced the negotiations between Iran and the P5+1 group of nations as well as the historic agreement reached in July 2015. She accused the Obama administration of favoring Iran over Israel during the course of the diplomatic efforts, stating in February 2015: “I wish they would be half as angry at Iran as they’ve been at Israel.”[14]

Ayotte characterized the final nuclear deal as a “historic capitulation.” She told Fox News after the deal was announced: “Unfortunately this deal does not address our national security needs or the needs of Israel or our allies in the region. … This is my view appears to be a historic capitulation when it comes to the arms embargo and the ICBM resolution, in other words their missile program.”[15]

Ayotte also signed onto a controversial March 2015 letter addressed to Iran’s leaders signed by 47 Republican Senators and spearheaded by hawkish Sen. Tom Cotton (R-AR). New Hampshire Democratic Chair Ray Buckley said Ayotte’s endorsement of the letter was motivated by her vice-presidential aspirations: “It’s a sign of just how backward things are in today’s Republican Party that signing a letter to the leaders of Iran that emboldened our enemies and weakened our country’s foreign policy is how Kelly Ayotte thinks she can position herself as a Vice Presidential running mate.”[17]

Ayotte was critical of other aspects of the Obama administration’s foreign policy, particularly in the Greater Middle East. “In Syria, we sat on the sidelines while over 70,000 Syrians were slaughtered, ceding our policy to the vetoes of the Russians and the Chinese in the United Nations, to a bunch of United Nations bureaucrats,” she charged in her 2013 CPAC speech. “And in Afghanistan the president has undercut his commanders time and time again. In Libya the administration again led from behind and never took steps to secure Qaddafi’s weapons stash, and you know where those weapons are now? They’re in the hands of Islamic radicals in Mali, Egypt, and Syria, used by terrorists to harm us and our allies.”[19]

Reporting on Ayotte’s speech, The American Conservative‘s Daniel Larison observed: “Having just cited the spillover effects of intervention in Libya, which she supported, Ayotte urges the U.S. to make a similar mistake in Syria and once again she wants to interfere in a foreign conflict without considering the negative consequences.” As “a McCain protégé,” he added, “she automatically assumes that the U.S. must become involved whether or not that involvement will contribute to a desirable outcome.”[20]

Although Ayotte remained a supporter of arming the Syrian opposition and later cosponsored a Senate resolution calling for U.S. military intervention in the conflict, she ultimately demurred on authorizing a U.S. strike as public opposition mounted. Blaming her decision on the Obama administration’s “incoherent and inconsistent” Syria strategy, Ayotte said in a September 2013 statement that she “could not at this time support committing U.S. military force in Syria.”[21]

Ayotte also enjoyed mostly cordial relations with the Tea Party, although she encountered criticism for casting a procedural vote against a government shutdown over Obamacare led by Tea Party favorite Sen. Ted Cruz in 2013.[22] Breitbart’s “Big Government” blog, a conservative news site, praised Ayotte as a “Tea Party hawk” who “has worked with Sens. John McCain (R-AZ) and Lindsey Graham (R-SC)—without joining their withering attacks on the party’s libertarian wing.”[23] (In fact, in 2012 remarks at the American Enterprise Institute, Ayotte criticized “libertarian” and “isolationist” Republicans for “getting away from Ronald Reagan” and suggesting “that we should be taking significant defense cuts.”)[24]