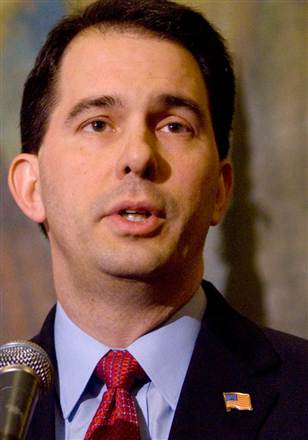 Wisconsin Governor Scott Walker is a well-known Republican Party figure who briefly ran for the party’s 2016 presidential nomination. He has been described as “an evangelical Christian with a record of taking on labor unions and winning elections as governor of a Democratic-leaning state.”[1]

Walker announced his intent to seek the Republican Party’s 2016 presidential nomination in July 2015, writing on Twitter: “I’m in. I’m running for president because Americans deserve a leader who will fight and win for them.”[2] Just three months later, in September 2015, he dropped out of the race. Observers pointed to his dwindling poll numbers and failure to receive major donor support as the primary reasons for his sudden exit from the race. “He was running low on campaign cash, sliding sharply in opinion polls, losing potential donors to rivals and unnerving supporters with a stream of gaffes, like saying he would consider building a wall along the Canadian border,” the New York Times said at the time, adding, “Mr. Walker was particularly anxious about accumulating a huge campaign debt that he would struggle for years to pay off unless he won the Republican nomination.”[3] 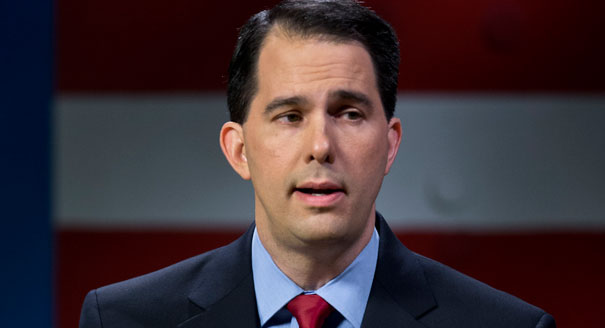 Walker made history in 2012 when he became the first governor ever in the United States to survive a recall vote. Walker had spurred widespread protests in Wisconsin in 2011 when he pushed through a law that ended collective bargaining rights for most public workers. “Walker's tussle with unions—and his ultimate triumph—endeared him to the conservative base,” CBS News has said, “and some analysts believe it could be his trump card in the GOP nominating contest, enabling him to keep his fans on the right from slipping away to another conservative candidate.”[4]

During his tenure as governor of Wisconsin, Walker has slashed income and property taxes, passed a bill requiring women to undergo an ultrasound before having an abortion, and signed a law that requires voters to present an ID before voting. "I don't think there's a single issue where you could point to a Walker policy that puts him anywhere but to the right in his party," one observer has said.[5]

During his presidential campaign, Walker took hawkish positions on foreign policy, calling for the United States to have a “strong presence” in the Middle East and stating he would not rule out U.S. “boots on the ground” in the fight against ISIS. Walker also ardently opposed the Iran nuclear agreement and said he would revoke it on his first day in office.

Walker has claimed that he does not know whether President Obama is a Christian. In February 2015, in response to a question about whether he believes Obama is a Christian, Walker opined: “I don’t know. I’ve actually never talked about it or I haven’t read about that.” He doubled down on his remarks in August 2015, answering the same question at a Koch network donor summit: “You’re not going to get a different answer than I said before. I don’t know. I presume he is. … But I’ve never asked him about that.” A July 2015 Washington Post article covering Walker’s comments emphasized that “Obama has repeatedly professed his Christian faith and attended Christian church services.”[6]

Many observers pointed to Walker’s weak foreign policy experience in discussions about his presidential candidacy. In response, according to the Washington Post, Walker tried to “to swiftly gain a fluency with foreign leaders, geography and history; recruit a coterie of national security advisers; and articulate a comprehensive foreign policy to help voters see him as commander-in-chief material.”[7]

Jim Talent, a former Senator known for his neoconservative views and a fellow at the Heritage Foundation, was tasked with forming Walker’s national security advisory council. In March 2015, it was announced that Walker’s national security adviser would be Mike Gallagher, a relatively unknown figure who has worked out of the office of hawkish Tennessee Sen. Bob Corker and was a member of the hawkish John Hay Initiative.[10] Another Walker aid, Asia specialist Reagan Thompson, previously worked for Sen. Kelly Ayotte.[11]

Former George W. Bush official and longtime neoconservative ideologue Richard Perle also expressed support for Walker. "Of all the people identified as candidates, Walker strikes me as the most interesting, who potentially would bring some rare qualities to the presidency," Perle said in February 2015.[12]

Walker also participated in the American Enterprise Institute’s 2015 summit at Sea Island, Georgia, where he reportedly had “four sit-downs with foreign-policy scholars.”[13]

Walker staked out extremely hardline foreign policy views during his presidential campaign. Politico argued that he was “one of the most hawkish candidates in the crowded GOP field.”[14]

Walker claimed that Ronald Reagan was “one of the best presidents when it comes to foreign policy” and Barack Obama “one of the worst.”[15] He quixotically asserted that “the most significant foreign policy decision” of his lifetime was President Reagan’s decision to fire air traffic controllers who had gone on strike in 1981.[16] One observer quipped: “If he considers the firing of air-traffic controllers ‘the most significant foreign policy decision’ of the last 47 years, it’s not unreasonable to wonder how, exactly, Walker defines ‘foreign policy.’”[17]

Walker also proclaimed that his experience dealing with protestors in Wisconsin, most of whom were teachers and union members, had prepared him to take on foreign policy challenges. “If I can take on 100,000 protesters, I can do the same across the world,” he said in February 2015 in response to a question about how he would deal with ISIS.[18]

"We need to terminate the bad deal with Iran on Day One, put in place crippling sanctions, and convince our allies to do the same," Walker proclaimed after the Iran nuclear deal was announced.[21]

Said one observer: “But if a President Walker were to actually scrap the nuclear deal on ‘Day One,’ and seek to impose ever-tougher sanctions, here's what would likely happen. Our European and Asian allies—exasperated with Uncle Sam's feckless policy switch, and determined to preserve their economic ties to Iran (which they view as a promising trading partner)—would refuse to reimpose their own sanctions. Britain's ambassador to America stated two months ago that the international sanctions have already reached ‘the high-water mark,’ and that if diplomacy fails, we would see ‘sanctions erosion.’ Germany's ambassador has similarly warned that, absent a nuke deal, ‘the sanctions regime might unravel.’”[22]

Walker also argued that Iran, along with ISIS and al-Qaeda, should be “eradicated.” He said in a March 2015 interview with right-wing radio broadcaster Hugh Hewitt: “When you have, not only with ISIS and al Qaeda, but you have an Iran, you have other places around the world groups that that want to not only annihilate Israel, but annihilate us in America, it’s like a virus. You’ve got to eradicate it. You can’t take out part of it, or it will come back.”[23]

According to an Atlantic contributor, Walker “believes that the safety of Americans is directly proportional to our willingness to intervene militarily in Middle Eastern countries.”[24]

Before announcing his presidential campaign, Walker strongly supported Israeli Prime Minister Benjamin Netanyahu’s controversial March 2015 speech to Congress criticizing President Obama’s nuclear negotiations with Iran. “We should listen closely as he [Netanyahu] raises legitimate concerns about Iran—giving him and his country the respect worthy of a close ally,” he wrote in an op-ed for the conservative National Review at the time.[25]

In May 2015, Walker made a trip to Israel that was partially funded by the Sheldon Adelson-backed Republican Jewish Coalition. After returning from Israel Walker opined: “[T]his trip only confirmed my belief that the current administration is not giving Israel the support it needs.”[26]

Walker has also declared his opposition to the two-state solution to the Israeli-Palestinian conflict. “[W]hen people bring up a two-state solution, and I’ve said as well after being there, certainly it’s not the time for that now. They need defensible and secure borders and they’re a long way off from having that happen,” he said on Sean Hannity’s radio program shortly after his return from Israel.[27]

Regarding Russia and the Ukraine, Walker argued that the United States should be “willing to potentially even put troops on the ground on the border of the Baltic states, as well as sending potential lethal-force assistance into Ukraine, to make sure that Putin understands there’s going to be consequences if they go further.”[28]

According to the New York Times in April 2015, Walker had “far stronger ties to the party’s biggest fund-raisers” than any other candidate in the 2016 race other than Jeb Bush. “Roughly half of the nation’s top 250 Republican donors have given money to Mr. Walker in his campaigns for Wisconsin governor,” the Times reported, adding that Sheldon Adelson was among the donors who supported Walker’s gubernatorial campaigns.[29]

The Milwaukee-based Bradley Foundation, which has been called "the country's largest and most influential right-wing organization,” has also strongly supported Walker over the years.[30] Some analysts presumed Bradley also supported his 2016 presidential bid.  Bradley and Grebe were central to Walker's rise to national prominence four years ago, when he rolled back the power of government unions. They'll probably be equally key to his almost-certain presidential bid," opined a March 2015 Bloomberg article.[31]

Amazon, “Unintimidated: A Governor's Story and a Nation's Challenge,” http://www.amazon.com/Unintimidated-Governors-Story-Nations-Challenge/dp/1595231110.

[25] Scott Walker, “Standing with Our Friends, Standing Up to Our Enemies,” National Review, March 2, 2015,http://www.nationalreview.com/article/414643/standing-our-friends-standing-our-enemies-scott-walker.