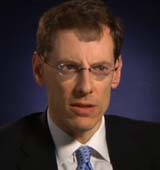 Mark Lagon, a visiting professor at Georgetown University with close ties to neoconservatism, is a former U.S. diplomat who served as a State Department official during the George W. Bush presidency. Before joining the Bush administration in 2002, Lagon worked for both the Project for the New American Century and the American Enterprise Institute (AEI). His experience also includes working for a number of right-wing political figures, including as an assistant to former Rep. Chris Cox (R-CA) when Cox was chair of the House Republican Committee, and as an aide to Jeane Kirkpatrick at AEI.[1]

In May 2010, Georgetown University announced that Lagon was joining the university’s School of Foreign Service as a visiting professor. Among the qualifications the university highlighted was Lagon’s expertise in international affairs, particularly in human trafficking. “Dr. Lagon brings … a wealth of experience from both the public and nonprofit worlds of international affairs. Prior to coming to MSFS, Ambassador Lagon served as the Executive Director and CEO of Polaris Project, a leading anti-human trafficking nonprofit organization from 2009-2010. From May 2007 to January 2009, he served as U.S. Ambassador-at-Large and Director of the Office to Monitor and Combat Trafficking in Persons (TIP) and Senior Advisor to the Secretary of State. In this capacity, he was Chair of the Senior Policy Operating Group, coordinating U.S. agencies domestic and global anti-trafficking policy.”[2]

From 2002 through 2004, Lagon served as a member of the U.S. State Department’s Policy Planning Staff, working on UN and other international organizations, democracy and human rights, and public diplomacy. During 1999-2002, he was a staff member of the Senate Foreign Relations Committee, and from 1995 to1998 he worked for the House Republican Policy Committee.[3]

During his tenure in the Bush State Department, Lagon served as an advisor on efforts to reform the UN Human Rights Council (previously, the Human Rights Commission), which was widely regarded as ineffectual. Despite reforms to the institution, which were initiated in 2006 by the UN General Assembly, Lagon has argued that the Human Rights Council remains problematic. He told Voice of America News in 2009, “The commission on human rights was seen as deadlocked and politicized. Unfortunately, this new body has been no better, and arguably worse.”[4]

Lagon is the author of The Reagan Doctrine: Sources of American Conduct in the Cold War’s Last Chapter. He has also written for several conservative publications, including  the National Interest, Philanthropy (the magazine of the right-wing Philanthropy Roundtable), and Perspectives on Political Science.