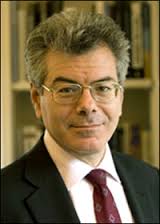 Gary Samore is an academic, former White House adviser, and former president of United Against Nuclear Iran (UANI), an advocacy group that promotes a hardline U.S. stance on Iran’s nuclear enrichment program. He is also the executive director of Harvard University's Belfer Center for Science and International Affairs, which has hosted foreign policy hawks like Eric Edelman, Meghan O’Sullivan, Paula Dobriansky, and Robert Zoellick. In August 2013, Samore joined the Brookings Institution as a nonresident senior fellow.[1]

Samore, who was a founding member of UANI's advisory board, was hired to lead the organization in September 2013,[2] just as negotiations between Iran and the P5+1 powers appeared to be gaining momentum. Although UANI claims to have a politically centrist posture, its board has been heavily weighted with neoconservatives and rightwing nationalists, including James Woolsey, Roger Noriega, Henry Sokolski, Mike Gerson, Mark Lagon, and Otto Reich. 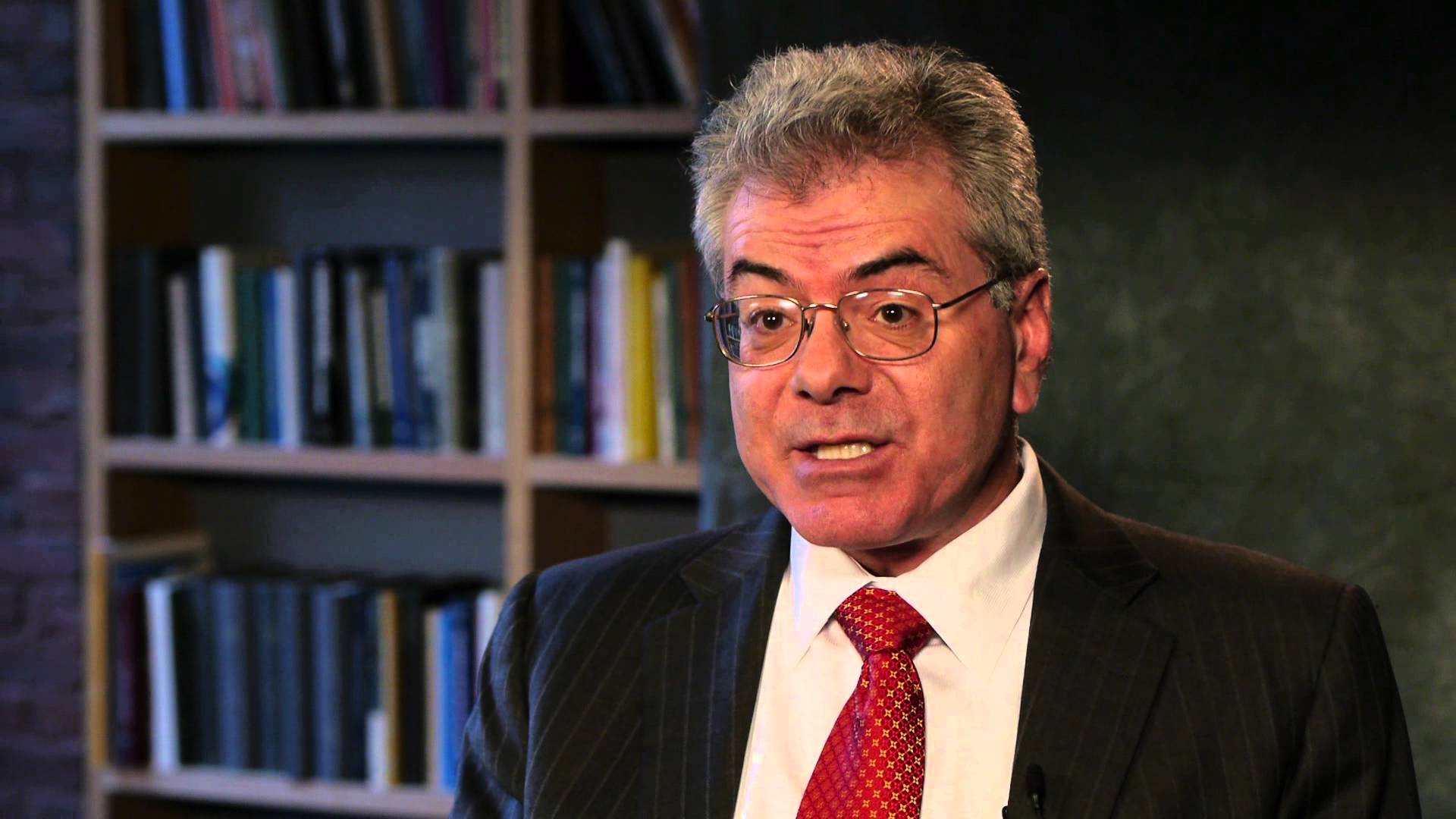 Before becoming UANI's president, Samore served as the Obama administration's Coordinator for WMD Counter-Terrorism and Arms Control—or "WMD czar." In this role, Samore was the administration's "top proliferation hawk,"[3] advising the White House on proliferation issues and helping to coordinate strategies with respect to disarmament agreements like START.[4]

While in his White House post, Samore expressed little optimism that a diplomatic understanding could be reached over Tehran's nuclear enrichment program, calling such a result "very unlikely" months after leaving the job.[5] In various statements, Samore accused Iran of "eating away at" the international nonproliferation regime "like a cancer"[6] and argued that the United States should not "act in a way that precludes" a unilateral Israeli attack on Iran, "because we're using the threat as a political instrument."[7]

Before joining the Obama administration, Samore held positions at the Council on Foreign Relations, the MacArthur Foundation, and the International Institute for Strategic Studies in London.[8] During the Clinton presidency, he worked on proliferation issues at the State Department and later advised the White House.[9]

Shortly after taking over the UANI post, Samore attempted to lower expectations surrounding the P5+1 talks, questioning whether Iranian President Hassan Rouhani—a relative moderate who was elected in 2013 after campaigning to improve Iran's relations with the West—would have the leverage within the Iranian political system to "produce a diplomatic deal," saying the "jury was still out" and that the United States should "be careful not to allow negotiations to proceed endlessly."[10]

Samore also argued that Rouhani's negotiating posture was not fundamentally different from that of his predecessor, the hardliner Mahmoud Ahmadinejad. “What [Rouhani is] offering is really no different than what we’ve heard from the previous government, from Ahmadinejad’s government for the last couple of years,” he said in October 2013 after the Iranians tentatively offered to cap their nuclear enrichment at 20 percent and submit to additional inspections. “They continue to reject any physical limits on their enrichment capacity—meaning the number and type of centrifuge machines, the stockpile of enriched material that they have in country.”[11]

Although he expressed doubt that an agreement could be reached, Samore opposed a move by congressional hawks like Sen. Lindsey Graham to pass new sanctions on Iran, saying that such a move "would look to much of the rest of the world as if the U.S. was blowing up the negotiations" and would give the Iranians "an excuse to accelerate their program."[12] Nonetheless, Samore threatened that "if Iran lets the coming months go by without agreeing to 1-on-1 deliberations with the U.S., or altering its nuclear position, it will be obvious that it is not prepared to take the steps necessary to address concerns about its nuclear program. In that case, additional pressure will be needed to change Iran's calculations and behavior.”[13] He added that if necessary, a U.S. military strike could “set [Iran's nuclear program] back years.”[14]

Samore’s approach towards Iran in the months preceding his exit from UANI’s leadership at times appeared out of step with the organization as a whole. For example, Samore believed that the nuclear negotiations with Iran were making progress in September 2014. “Despite the impasse over the scale and scope of Iran’s enrichment program, the negotiators have made progress on several other issues, such as converting the Fordow enrichment facility to a research and development facility and converting the Arak heavy water research reactor to produce less plutonium,” Samore wrote at the time.[15]

At the same time, however, UANI communications director Gabriel Pedreira lambasted the then on-going negotiations. “We haven’t seen a single concession from the Iranians, nor has even one centrifuge been destroyed,” Pedreira claimed. “We want an economic blockade if real change doesn’t come about.”[16]

The gap in Samore and Pedreira’s messaging led one observer to question “how much leadership Samore is offering to the organization and whether his role is more than purely ceremonial.”[17]

In December 2014, Samore joined David Albright of the Institute for Science and International Security and the Hudson Institute’s Michael Doran during testimony before the Senate Foreign Relations Committee on the status of the Iranian nuclear negotiations. At the hearing Samore bluntly argued that additional sanctions on Iran passed by Congress would by counter-productive. “My concern is that some in Iran might actually welcome such legislation because they could very well calculate that it will put more pressure on the P5+1 to make additional concessions in order to get a deal to avoid having the old sanctions imposed and then going back to the previous situation,” Samore argued.[18]

However, in January 2015, Samore appeared alongside Iran hawks Dennis Ross, John Hannah, and Ray Takeyh at a panel discussion hosted by the Jewish Institute for National Security Affairs and asserted that a threat of additional sanctions against Iran could help the negotiations. "A united threat by the P5+1 to end the talks and reinvigorate sanctions could make a big difference to the potential success of negotiations,” Samore declared.[19]

Samore also signed a UANI press release shortly after the negotiations with Iran were extended in November 2014 that explicitly called for the kind of trigger sanctions on Iran that Samore opposed in his December 2014 Senate testimony. “The White House and Congress should act now to specifically define, agree and authorize decisive sanctions if Iran violates the JPA or fails to accept the terms of a comprehensive nuclear agreement by March 2, 2015,” the UANI statement read.[20]

In April 2015, the New York Times cited Samore as being among the “skeptical experts” who were “impressed” with the April 2015 Lausanne framework agreement reached between Iran and the P5+1. Shortly after the deal was reached, Samore also signed onto a letter by the Iran Project, a group of former U.S. officials that argue for better ties between the United States and Iran, that explicitly welcomed the agreement.  Around the same time, he wrote an op-ed for Foreign Affairs titled, “Deal With It,” which called on Congress to stop its efforts to impose additional sanctions on Iran.[21]

During an April 2015 Israel Policy Forum teleconference, Samore also dismissed criticisms that a nuclear deal would be bad for Israel, a chief UANI claim. “In terms of Israel’s isolation with other countries, I think the Palestinian issue and settlements is a far more dangerous concern to Israel’s legitimacy than the Iran nuclear issue,” Samore declared.[22]

In April 2015, journalist Jim Lobe reported that during a panel discussion on the Iran talks hosted by the neoconservative Jewish Institute for National Security Affairs (JINSA), an official from the American Israel Public Affairs Committee (AIPAC) complained to a “UANI staffer about Samore’s praise for the announced framework.” The UANI staffer reassured the AIPAC official that “Samore only speaks in his personal capacity” and that UANI’s CEO Mark Wallace “controlled the group’s agenda.”[23]

"Most of us would have preferred a stronger agreement," the letter stated about the April 2015 Lausanne framework deal. It goes on to list a number of policy recommendations against Iran, including that “the United States must go on record now that it is committed to using all means necessary, including military force” to prevent “Iran from producing sufficient fissile material for a nuclear weapon.” The letter added that “the President should declare this to be U.S. policy and Congress should formally endorse it.” The letter, however, ended with the disclaimer: “This statement reflects the broad consensus of the group; not every member of the group endorses every judgment or recommendation.”[25]

While the letter stated that the deal being discussed between Iran the P5+1 “falls short of meeting the administration’s own standard of a ‘good agreement,’” Samore proclaimed in an interview after the letter’s publication: “If you look through the substance of the letter, you'll see that the positions we take on the key unresolved issues are very much in line with current U.S. policy.”[26]

After the Iran nuclear negotiations concluded successfully with an agreement in July 2015, UANI released a statement announcing that Samore would be stepping down as UANI’s president. His support for the deal was given as the reason. “Gary ultimately supports the agreement and is stepping down to avoid any conflict with UANI’s work in opposition to the agreement,” the press release read. However, according to the statement, Samore would continue to be involved with UANI as a board member.[27]

Commented Samore: "I am proud to have been a part of UANI from its inception and the essential work UANI has done on the Iran nuclear issue, particularly in the area of sanctions and economic pressure. If the nuclear agreement goes forward—as I believe it should—UANI will continue to play a critical role monitoring implementation and helping to maintain non-nuclear sanctions until Iran changes its behavior in these other areas."[28]

Samore’s inconsistency and UANI’s hardline on Iran may have been due to the funding the group receives from avowedly hawkish sources. UANI’s funding has long been shrouded in obscurity, in part because the U.S. Justice Department has unprecedentedly shielded the organization from having to disclose its internal workings. In January 2015, Eli Clifton of The Nation revealed that notorious Republican mega-donor Sheldon Adelson was a prominent funder of the group. Adelson, who has in the past argued for the United States dropping a nuclear bomb on Iran, is a stringent Iran-hawk.[30]

Clifton quipped about Adelson’s association with UANI: “So how does UANI—a group which denounces Iran’s ‘incitement to genocide’ for its threatening comments toward Israel—respond to their own funder’s calls for the nuking of Tehran, a city of 7.8 million people?”[31]

[3] Jim Lobe, “Iran Hawks Down but Not Out After Geneva Talks,” Inter Press Service, October 19, 2013, https://rightweb.irc-online.org/articles/display/iran_hawks_down_but_not_out_after_geneva_talks.

[12] Jim Lobe, “Iran Hawks Down but Not Out After Geneva Talks,” Inter Press Service, October 19, 2013, https://rightweb.irc-online.org/articles/display/iran_hawks_down_but_not_out_after_geneva_talks.