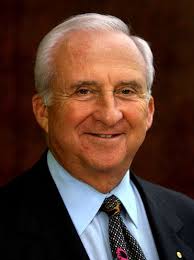 Melvin Sembler, a real estate magnate and strip-mall developer, is an important Republican Party donor who has supported several neoconservative groups and advocacy campaigns. Sembler is chairman of the Sembler Company, a Florida-based real estate company.

Sembler has a long history of involvement in GOP politics. He served as U.S. ambassador to Italy during the first administration of George W. Bush and to Australia and Nauru during the presidency of George H.W. Bush.[1] According to Opensecrets.org, during the period 1989-2009, Sembler donated nearly $500,000 to political races and conservative political action committees.[2] 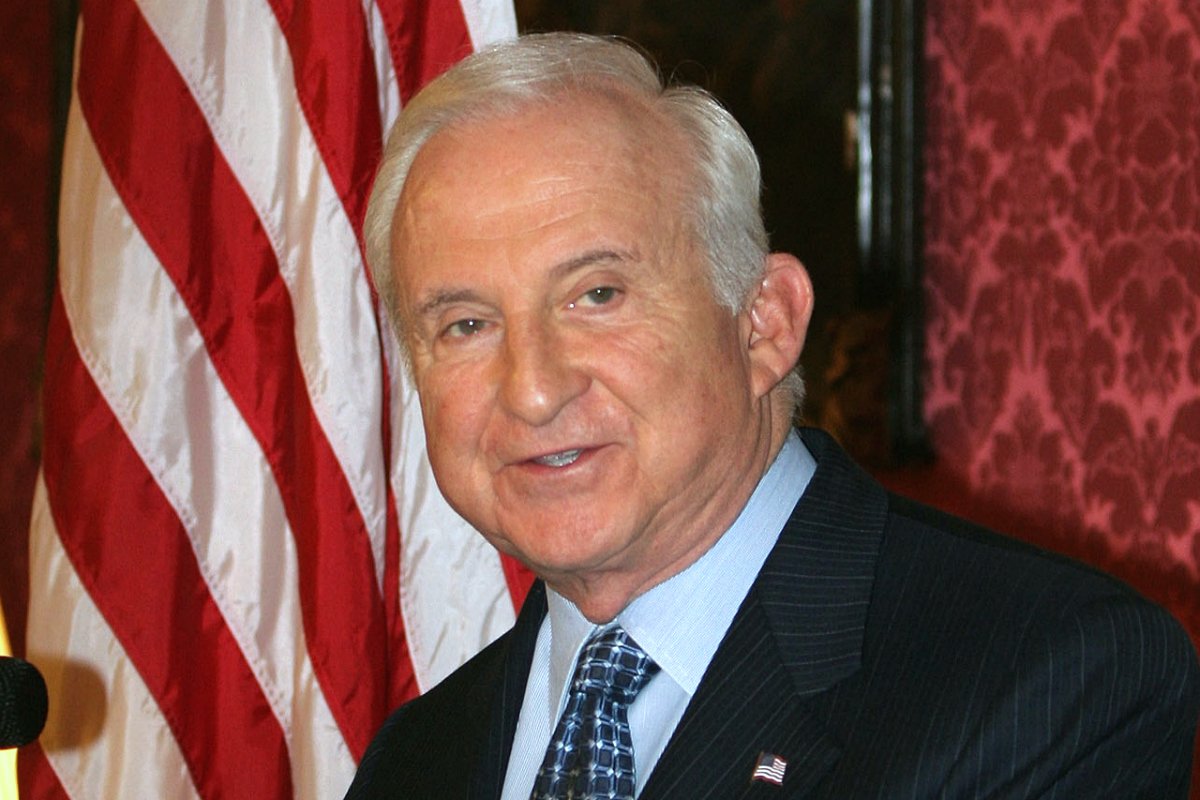 During the 2016 Republican primary contest, Sembler backed former Gov. Jeb Bush. In late 2015, when Bush announced the composition of his “Jewish leadership team,” Sembler was one of several “pro-Israel” figures on the team, which also included former Rep. Eric Cantor and various members of the Jewish Republican Committee. “Noticeably absent from the list,” as one local Florida newspaper put it, was controversial casino mogul Sheldon Adelson, “the nation’s top Jewish political donor and bankroller of the Republican Jewish Coalition.”[3]

Sembler has been a consistent supporter of militarist advocacy campaigns for many years, serving on the board of trustees of the American Enterprise Institute (AEI) and joining Adelson to help bankroll the lobbying group Freedom’s Watch, which was founded in 2007 in part to promote the hardline Middle East agenda pushed by the George W. Bush administration.[4]

Sembler also supported the Liz Cheney-led pressure group Keep America Safe (KAS). Established in 2009 to create political ads attacking Democrats and promote a hawkish view of U.S. security, KAS advisers have included neoconservative pundits William Kristol and Michael Goldfarb. Discussing his support for the group, Sembler told Newsweek, “I love Liz Cheney and what she’s doing,” stating that he intended to be “as supportive [of KAS] as my budget will allow.”[5]

Sembler also supported former Bush administration figure I. Lewis Libby by serving as chairman of the Libby Legal Defense Fund, which raised money for the ultimately unsuccessful defense of Libby, Dick Cheney’s former chief staffer, against perjury and other charges related to the leaking of CIA agent Valerie Plame’s name.[6]

While the overwhelming majority of the candidates Sembler has supported have been Republicans, he has supported some Democrats, including former Sen. Joe Lieberman (I-CT), for whom Sembler hosted a campaign event in September 2006.[7] According to records from the Federal Election Commission, Sembler donated $10,500 to Friends of Joe Lieberman during that month.

As a funder and organizer of Freedom’s Watch, a group whose supporters included former Bush White House spokesman Ari Fleischer, Sembler placed himself at the center of Bush administration efforts to garner support for the “surge” in Iraq and for get-tough policies on Iran, as well as domestic issues like immigration. Soon after it was founded in 2007, Freedom’s Watch went on the offensive in support of these issues, creating a series of television ads that proclaimed “victory is America’s only choice.” Reported the Washington Post: “Many in Freedom Watch’s donor base—including Adelson, the chairman and chief executive of the Las Vegas Sands Corp., and Sembler, the strip-mall magnate from St. Petersburg, Fla.—have always been strong supporters of Israel. The group’s initial ad blitz in defense of Bush’s troop buildup in Iraq came naturally out of those interests.”[8]

Commenting on the Post’s article, Inter Press Service reporter Jim Lobe wrote: “I don’t doubt that the group’s donors consider themselves ‘strong supporters of Israel,’ but what precisely is meant by that? … Most [Republican Jewish Coalition heavyweights, like Adelson and Sembler] are strong supporters of former Prime Minister Binyamin Netanyahu and his Likud Party, which, the last time I checked, constituted the government’s chief political opposition and is maneuvering to bring it down. So, if they oppose the current government of Israel, in what way are they ‘strong supporters of Israel?’” Lobe also argued that the “pro-Israel” label “is not only inaccurate; it is also dangerous. It implies that neoconservatives have Israel’s best interests at heart, which, as in the case of the Iraq war (and last summer’s conflict with Hezbollah) and in so many other instances, is demonstrably not the case. It also puts those individuals or organizations—particularly in the American Jewish community—that are very concerned about Israel but that believe that the neoconservatives have actually undermined the country’s security in a kind of political limbo.”[9]

Besides his long-standing association with the Bush family, which stems back to the late 1970s when he served as a fund-raiser for Bush Senior’s presidential campaign, Sembler is well known for establishing a controversial drug treatment program for teens called “Straight.” According to Sembler’s State Department biography: “In 1976, Sembler and his wife founded Straight, an adolescent drug treatment program. During its 17 years of existence, Straight successfully graduated more than 12,000 young people nationwide from its remarkable program.”[10]

Journalist Maia Szalavitz, who has reported extensively on teen rehab programs and focused on Straight Incorporated in the first two chapters of her 2006 book Help at Any Cost: How the Troubled-Teen Industry Cons Parents and Hurts Kids, summarized some of her findings in a 2006 presentation: “Straight … put kids on peanut-butter-only diets for weeks, kept them awake with no sleep whatsoever for days, forced them to spank each other and made them maintain various stress positions or exercise to the point of exhaustion. It constantly humiliated participants, famously gagging some with Kotex, calling girls ‘sluts’ and boys ‘fags’ and making those who had been sexually abused take responsibility for their ‘part’ in seducing the pedophiles who had molested them. Straight also extensively used isolation and restraint.”[11]

“Straight was a perfect product of the drug war—and a perfect vehicle to advance its aims,” Szalavitz added. “When Nancy Reagan came under fire for fussing around with White House China and spending money on designer dresses, Mel Sembler came to the rescue. He suggested that the First Lady make fighting teen drug use her cause—and he suggested a visit to Straight to inspire her. And inspire her it did. … The next day [after her visit], she told the press that America was ‘in danger of losing an entire generation’ to drugs, based on what she’d heard. … Straight both fed and was fed by the drug war and its propaganda.”[12]

Straight Inc. was eventually forced to shut down, but not before it had to pay out hundreds of thousands: “In 1983 a former patient won $220,000 from a jury for unlawful imprisonment that involved regular beatings at the Straight, Inc., facility in St. Petersburg, Florida. Another Florida patient won a $721,000 jury award in 1990. Dozens—if not hundreds—of other suits were settled out of court.”[13]

Despite the problems with Straight, Sembler went on to found another anti-drug group, the Drug Free America Foundation.[14]

Shortly after assuming his post in Italy in December 2001, Ambassador Sembler found himself in the middle of a controversy when he was apparently caught unawares by an unapproved meeting in Rome between “mid-level Pentagon officials,” Iranian dissidents, and an Italian intelligence official, according to a September 2004 Washington Monthly report. The meeting involved several players: the neoconservative pundit Michael Ledeen, a scholar at the American Enterprise Institute; Harold Rhode and Larry Franklin (a veteran intelligence official who was later charged with passing classified information to the Israeli government), both members of then-Undersecretary of Defense for Policy Douglas Feith’s staff; the notorious Iranian arms dealer Manucher Ghorbanifar, who was implicated in the Iran-Contra scandal in the 1980s, and several other Iranians; and Nicolo Pollari, then head of Italian military intelligence, and Antonio Martino, a former Italian defense minister. The secret meeting—as well as later meetings—were organized by Ledeen in cooperation with Feith’s office in an effort to push a hardline, regime-change policy toward Iran, where Ghorbanifar claimed he was in touch with dissident elements of the military.[18]

Regarding Sembler’s role in the affair, the Washington Monthly reported: “Alarm bells about the December 2001 meeting began going off in U.S. government channels only days after it occurred. On Dec. 12, 2001, at the U.S. embassy in Rome, America’s newly installed ambassador, Mel Sembler, sat down for a private dinner with Ledeen, an old friend of his from Republican Party politics, and Martino, the Italian defense minister. The conversation quickly turned to the meeting. The problem was that this was the first that Amb. Sembler had heard about it. According to U.S. government sources, Sembler immediately set about trying to determine what he could about the meeting and how it had happened. Since U.S. government contact with foreign government intelligence agencies is supposed to be overseen by the CIA, Sembler first spoke to the CIA station chief in Rome to find out what if anything he knew about the meeting with the Iranians. But that only raised more questions because the station chief had been left in the dark as well. Soon both Sembler and the Rome station chief were sending anxious queries back to the State Department and CIA headquarters in Langley, Va., respectively, raising alarms on both sides of the Potomac.”[19]