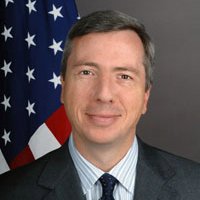 Randall Fort, a former corporate officer with Goldman Sachs and program director at TRW’s space and defense groups, served as assistant secretary for intelligence and research in the State Department during the second term of George W. Bush’s presidency. The post included directing State’s in-house intelligence unit, the Bureau of Intelligence and Research (INR).[1] Fort also served in a number of posts during the presidencies of Ronald Reagan and George H.W. Bush, including director of the Office of Intelligence Support at the Department of the Treasury and deputy executive director of the President’s Foreign Intelligence Advisory Board (PFIAB).[2]

After leaving the State Department in 2009, Fort joined the Raytheon Corporation, a major defense contractor, as a director of programs security. According to his Raytheon biography, he is “responsible for partnering with Raytheon’s customer community to elevate programs security as a strategic business enabler.”[3]

Although not a vocal political advocate or pundit, Fort received some attention in early 2016 when Sen. Ted Cruz listed him as a foreign policy advisor to his presidential campaign, highlighting Fort’s service in the Reagan, George H.W. Bush and George W. Bush administrations.

President George W. Bush nominated Fort to the State post in June 2006, a move some commentators interpreted as an effort to rein in the INR, which had a reputation for independence in part because it had dissented from several intelligence reports produced by the Bush administration in the run-up to the invasion of Iraq. Fort replaced Carl Ford, a conservative Republican who was an outspoken opponent of the nomination of John Bolton as the U.S. ambassador to the United Nations. During the Senate nomination hearings, Ford said of Bolton: “I’ve never seen anyone quite like Secretary Bolton in terms of the way he abuses his power and authority over little people … The fact is that he stands out, that he’s got a bigger kick and it gets bigger and stronger the further down the bureaucracy he’s kicking.”[4]

Randall Fort, on the other hand, was a Bolton proponent, reportedly writing a letter in support of the nomination during Bolton’s Senate confirmation hearing, according to United Press International.[5]

But the real concern was whether, under Fort’s directorship, the INR would continue to provide an independent and critical voice on intelligence issues. He had experience working for intelligence agencies; Fort’s 2006 appointment represented his second stint at INR, having served as deputy assistant secretary for functional analysis and research under Bush senior. He also served intelligence-support roles in Reagan’s Department of the Treasury and with PFIAB. Fort’s tenure at PFIAB overlapped with that of Gary Schmitt, a former executive director of the Project for the New American Century, who directed PFIAB from 1984 to 1988.

According to political writer Joshua Micah Marshall, the INR was “one of the few, perhaps only, U.S. intelligence agencies to be consistently skeptical and correct about Iraq’s phantom WMDs.”[6] Indeed, before the Iraq War, the INR published a comment stating that Iraq might be seeking a nuclear arsenal, but that it considered “the available evidence inadequate to support such a judgment.”[7]

The Senate’s June 2004 “Report of the Select Committee on Intelligence on the U.S. Intelligence Community’s Prewar Intelligence Assessments on Iraq” recounts a number of cases in which the INR opposed the Pentagon and other intel outfits. For example, regarding the Iraqi aluminum tubes allegations, which Vice President Dick Cheney and other officials used to support their claim that Saddam Hussein was building a nuclear arsenal, the Select Committee reported, “Although the [Department of Energy’s] Office of Intelligence and the Department of State’s Bureau of Intelligence and Research both assessed that the aluminum tubes Iraq was seeking were probably not intended for a nuclear program, only INR disagreed with the assessment that Iraq had begun reconstituting its nuclear program.”[8]

The Select Committee also highlighted INR’s critical assessment of the 2002 National Intelligence Estimate (NIE), which was used by the White House to build the case for war. According to the committee, “An INR chemical and biological weapons analyst told committee staff, ‘There’s no question in my mind that the process was rushed, and I’ve never participated in an NIE that was coordinated in the manner in which this was.’ The analysts said that more time would have allowed ‘the key judgments to better reflect what was in the back of the book…. We failed in adequately coordinating the key judgments.’ He noted that this is a particular concern because many readers do not read more than the key judgments.”[9]

During Fort’s tenure as head of INR, the agency attracted little attention nor did his work draw criticism from those who earlier had questioned his appointment. One highlight was Fort’s participation in preparing the “Annual Threat Assessment and U.S. National Security Challenges”—yearly congressional testimony delivered by the intelligence services. The testimony—which was given before the Senate Select Committee on        Intelligence on January 11, 2007, by Director of National Intelligence John Negroponte; CIA Director Gen. Michael Hayden; Defense Intelligence Agency Director Lt. Gen. Michael Maples; FBI Director Robert Mueller; and INR Director Fort—was notable for the broad agreement among the intelligence officials that “the Iraq war had helped fuel Islamic radicalism around the globe and had most likely bolstered the recruiting efforts of al-Qaida,” as the New York Times reported.[10]

Among the issues highlighted in the officials’ testimony was the continuing threat from terrorism. Negroponte highlighted the threat posed by Al Qaeda as well as from other groups, including Hezbollah, which he said was “backed by Iran and Syria. As a result of last summer’s hostilities [with Israel], Hezbollah’s self-confidence and hostility toward the United States as a supporter of Israel could cause the group to increase its contingency planning against U.S. interests.” He added, “I emphasize that we, the United States, do not and could not accomplish our counterterrorism mission unilaterally.”[11]

Before becoming assistant secretary at State, Fort parlayed his earlier government experience into influential posts in the private sector, working as director of global security at Goldman Sachs. That position entailed overseeing “all physical and personnel security measures,” according to Fort’s bio page at the Eisenhower Institute, a centrist policy think tank where he served as a board member before rejoining the State Department.[12]

Fort’s 2006 arrival at State coincided with a number of other appointments by the Bush administration involving executives from Goldman Sachs. Hank Paulson, who became secretary of the U.S. Treasury in July 2006, was Goldman Sachs’ chief executive; and Joshua Bolten, who became White House chief of staff in April 2006, was a former executive at the bank.[13] Robert Zoellick, previously the number two at the State Department, announced in mid-June 2006 that he was leaving the administration to take up a job at Goldman Sachs, where he had worked before being tapped to serve in the George W. Bush administration.[14] (Zoellick later went on to succeed Paul Wolfowitz as World Bank president.)

Fort’s other past experience, according to the Eisenhower Institute, includes being “one of the first foreigners ever” to serve as an assistant to a member of the Japanese Diet; working on the staff of former Rep. Bill Gradison (R-OH); and being selected as a Henry Luce scholar.[15]