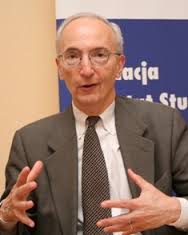 Robert J. Lieber, a frequent op-ed contributor in leading U.S. newspapers, is a professor of government at Georgetown University.[1] He is a former member of the now-defunct Committee on the Present Danger (CPD), a Cold War-era pressure group that was revived in the wake of the 9/11 terrorist attacks to promote an aggressive “war on terror” targeting “militant Islamism and the terrorism that it spawning.”[2] Repeating a core neoconservative argument for military intervention in Iraq and other Muslim countries, Lieber argued on the CPD website that “Islamist terrorism … is the overriding threat to America’s national security. The combination of terrorism plus weapons of mass destruction is unique in the danger it poses. This is a long-term peril and confronting it must be our national priority.”[3] Anti-war writer Justin Raimundo has described Lieber as a “leading academic apologist for the Bush Doctrine of preemption and American primacy.”[4]

In February 2015, Lieber signed an open letter organized by the neoconservative Foreign Policy Initiative that called for increasing U.S. military spending. “The trillion dollars of defense spending cuts required by the Budget Control Act and sequestration present a grave and growing danger to our national security,” the letter read. “Congress should adopt a budget for fiscal year 2016 that puts us on a path to restore defense spending to at least the level recommended by Secretary Gates, including significantly greater funding than the President has requested.” The letter was co-signed by numerous other neoconservative ideologues, including Eliott Abrams, Robert Kagan, Bill Kristol, Joseph Lieberman, Mark Dubowitz, Clifford May, Michael Rubin, and Eliot Cohen, among others.[5]

Lieber has been critical of President Barack Obama’s foreign policy, claiming in March 2012 that “Obama has been conciliatory towards America’s adversaries.” He has also denounced Obama diplomatic efforts with Cuba and Iran. When confronted with the fact that an overwhelmingly majority of Americans support Obama’s engagement with Cuba, Lieber said this was “small potatoes.”

Liber was also opposed to the landmark July 2015 nuclear deal between Iran and the “P5+1” world powers. He said shortly after the deal was reached: “There is an underlying flaw, I think, in the Obama approach … you can’t get [the Iranians] them to release Washington Post bureau chief [Jason Rezaian, jailed since July 2014], who’s held in Tehran in brutal conditions on trumped-up charges? It’s preposterous.”[6] However, just before the nuclear deal was formally implemented in January 2016, Jason Rezaian and several other Americans who were held in Iran were freed.[7]

Shortly before the 2008 U.S. presidential election, Lieber wrote an essay that highlighted Iran’s nuclear energy program as one of several issues that would likely divide the United States and Europe, regardless of the outcome of the election. “Issues such as Iran, the Middle East, terrorism and international trade will ensure that there will not be the kind of easy harmony and seamless multilateralism that some observers have explicitly or implicitly ascribed to the pre-George W. Bush years and assumed would re-emerge in the post-Bush era.”

Lieber also bemoaned in 2008 that “many European governments have been unwilling to adopt the harsh economic sanctions that might cause Teheran to reverse its dangerous course. In the absence of such measures, the US might well find itself seriously contemplating the use of force and doing so in the face of European reluctance or more probably serious opposition.”[8]

After the 2003 invasion of Iraq, Lieber became a vocal defender of the war and a critic of those who complained about the neoconservative influence in the George W. Bush administration. Echoing other neoconservative writers—including Danielle Pletka and Michael Rubin[9]—Lieber wrote in the May 2003 Chronicle of Higher Education that the “neoconservative conspiracy” was a “sinister mythology” “worthy of the Iraqi information minister, Muhammed Saeed al-Sahaf, who became notorious for telling Western journalists not to believe their own eyes as American tanks rolled into view just across the Tigris River.”[10] He continued, “Ultimately, the neocon-conspiracy theory misinterprets as a policy coup a reasoned shift in grand strategy that the Bush administration has adopted in responding to an ominous form of external threat.… But to characterize it in conspiratorial terms is not only a failure to weigh policy choices on their merits, but represents a detour into the fever swamps of political demagoguery.”[11] He concluded that Islamic extremism indeed represents an “existential” threat to the United States.

In 2002, Lieber advocated invading Iraq, arguing that the country had ties to terrorist groups and that Saddam Hussein had weapons of mass destruction. He wrote: “Besides its ties to terrorists, Iraq has produced large quantities of potential terrorist weapons, among them the deadly VX nerve gas and weaponized anthrax. For more than two decades, Iraq has pursued a covert program to develop nuclear weapons. Given Hussein’s obsessive hatred of the United States, it would be irresponsible to assume that he would forgo an opportunity to supply terrorists with chemical or biological weapons, or even a nuclear device, for an attack on the U.S. if the origin of the weapon could be concealed. Containment is a risky defense against a man of Hussein’s character.”[12]

Even as public opinion began to turn against the invasion in early 2004, Lieber continued to defend the war.. Arguing that “Saddam Was a Grave Threat,” Lieber asserted that although Iraqi WMD were never found, “ultimate peril” did exist that justified the war. Far more important than the supposed weapons, wrote Lieber, “were Iraqi leader Saddam Hussein’s history, capability and intent, and the serious and long-term threat he posed to a vital region, to America’s allies and to our national security.”[13]

During the Bush presidency, Lieber frequently wrote for the State Department’s Washington File information outlet and was invited to speak at various events. In January 2005, for example, Lieber was invited by Washington File to write a commentary on President Bush’s second inaugural, during which the president outlined an ambitious program of democracy promotion around the globe and said: “[I]t is the policy of the United States to seek and support the growth of democratic movements and institutions in every nation and culture, with the ultimate goal of ending tyranny in our world.”[14]

Defending Bush’s words, Lieber wrote, “His statement embodies a key insight: real democracies do not make war on other democracies, nor do they nurture terrorists. Yet some foreign observers have misunderstood or even distorted the meaning of this statement, claiming that it signals an imperial crusade to impose democracy by force. This kind of criticism not only provides an excuse for dictatorship and oppression, but it completely misstates the meaning of the Bush speech.”[15]

Among several other publications, Lieber is author of The American Era: Power and Strategy for the 21st Century (2005). Political Science Quarterly’s review of The American Era was generally favorable, giving Lieber credit for balance and thoroughness. However, according to the review, “One glaring exception to this rule is the chapter on Iraq. Lieber pays scant attention to the numerous criticisms of the administration of George W. Bush, including that it was intently looking for information that would link Saddam Hussein to both Osama bin Laden and September 11. Given the importance of Iraq to the intensification of anti-American attitudes, this omission is problematic.”[16]

[2] Committee on the Present Danger, “Our Mission,” http://www.committeeonthepresentdanger.org/index.php?option=com_content&view=article&id=50&Itemid=54.

[9] Pletka told a Washington Post reporter: “I think the phrase ‘neocon’ is much more popular among people who think it shields their anti-Semitism. But it doesn’t” (Philip Kennicott, “The Knowledge that Doesn’t Equal Power,” Washington Post, May 13, 2004). In an April 2006 article for the Yale Daily News, Rubin criticized blogger and University of Michigan professor Juan Cole, who was being considered for a tenured position at Yale, implying that Cole’s analysis of the Middle East was antisemitic: “While Cole condemns anti-Semitism he accuses prominent Jewish-American officials of having dual loyalties, a frequent anti-Semitic refrain. That he accuses Jewish Americans of using ‘the Pentagon as Israel’s Gurkha regiment’ is unfortunate.” See Michael Rubin, “Cole Is Poor Choice for Mideast Position,” Yale Daily News, April 18, 2006.