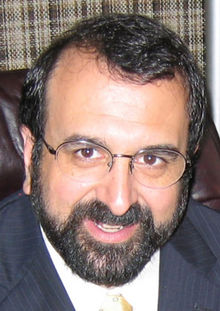 Robert Spencer is a controversial writer and polemicist best known for his anti-Islamic activism. A self-styled expert on Islam and “jihad,” Spencer runs the blog Jihad Watch, an outlet for fear-mongering rhetoric funded by the David Horowitz Freedom Center. Along with right-wing blogger Pamela Geller, Spencer also heads the group Stop Islamization of America (SIOA), which gained notoriety organizing rallies against the Park 51 Islamic cultural center in Manhattan (the so-called “Ground Zero Mosque”). A frequent contributor to right-wing outlets like FrontPageMag.com, Human Events, and Steven Emerson’s Investigative Project on Terrorism, Spencer is also the author of at least a dozen books, including titles like The Truth about Muhammad: Founder of the World’s Most Intolerant Religion (2006) and Religion of Peace? Why Christianity Is and Islam Isn't (2007).[1]

In May 2015, Spencer helped organize the controversial “Draw Muhammad” contest in Garland, Texas, which drew international attention when armed attackers allegedly affiliated with ISIS were gunned down by police after they opened fire outside the venue. Among the participants at the event were the notorious anti-Islam Dutch MP Geert Wilders, who was the keynote speaker, and Pamela Geller, who helped organize the event.[2] 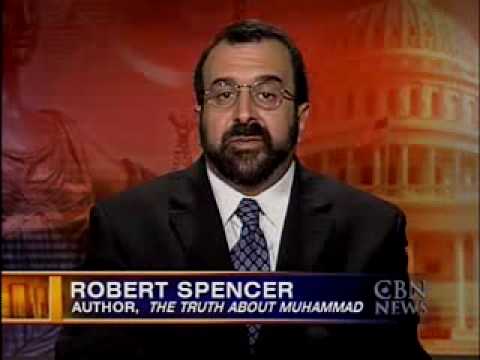 Some observers sought to compare the incident to the January 2015 terrorist attack on the French satirical magazine Charlie Hebdo. However, Hebdo employee Jean-Baptiste Thoret vigorously rejected the comparison, arguing that there was “absolutely no comparison.” He told Charlie Rose that the group that put together the Muhammad cartoon contest was an “anti-Islamic movement,” whereas Charlie Hebdo’s criticized all religions, not Muslim people “in particular.”[3]

Spencer’s work has attracted considerable criticism from Islamic and civil rights groups alike. The Council for American-Islamic Relations (CAIR) has described Jihad Watch as an “Internet hate site,” and SIOA is considered a hate group by both the Anti-Defamation League and the Southern Poverty Law Center (whom Spencer has said “fronts for the jihad” and “smears freedom fighters”[4]). In its August 2011 report on the “Islamophobia Network” in America, the Center for American Progress identified Spencer as “the primary driver in promoting the myth that peaceful Islam is nonexistent and that violent extremism is inherent within traditional Islam.” (In response, Spencer called the report “an instrument” of “the misogynistic and unjust agenda of the Islamic jihad.”) Even Dinesh D’Souza, a noted right-wing U.S. social critic and evangelical Christian, has criticized Spencer for employing “dubious” histories of Islamic civilizations and selective interpretations of the Qur’an.

Spencer and Jihad Watch were cited 162 times in the rambling, xenophobic manifesto of Norwegian mass murderer Anders Breivik, far more than any other single source.[5] Spencer, along with his colleague Pamela Geller, have also both been banned from entering the United Kingdom, on the grounds that they have made “statements which may ‘foster hatred’ and lead to ‘inter-community violence’ in the UK.”[6]

According to a report by FiveThirtyEight, “Geller and Spencer are, between the two of them, the leaders of 17 percent (four of 24) of all the anti-Muslim” hate groups in the United States identified by the Southern Poverty Law Center.[7]

For his part, Spencer maintains that he has never “said or written anything that characterizes all Muslims as terrorist or given to violence,” and that “any Muslim who renounces violent jihad and dhimmitude is welcome to join in our anti-jihadist efforts.” In effect, Spencer characterizes Islam itself (and, essentially until they prove him otherwise, most Muslims) as inherently violent, a claim he hedges by demurring on whether individual Muslims are inclined towards violence or extremism. Still, he argues that any “moderate” Muslim must necessarily “decisively [reject] Qur'anic literalism” and work for “reform of the Islamic doctrines, theological tenets and laws that Islamic jihadists use to justify violence,” essentially placing the burden of proof that they are not terrorists on individual Muslims.

Even then, Spencer warns, “Not all self-proclaimed moderates are truly moderate.”[8] Spencer commonly refers to ostensibly moderate Muslims he believes to be secret radicals as “smooth deceivers,” or “Islamic supremacist deceivers.”

In response to various critics who have accused him of allowing “jihadism” to stand in for mainstream Islam in his arguments, Spencer has doubled down on his claim that mainstream Islam itself is inherently inclined toward jihad. “I do not single out the jihadist interpretation of Islam and anoint it as the only legitimate interpretation,” he wrote in a November 2006 posting on Jihad Watch. “As I have pointed out many times, all the orthodox sects and schools of [Islamic] jurisprudence teach violent jihad. I would love to highlight mainstream peaceful Islamic sects that are regarded as orthodox by other Muslims. Unfortunately, such sects do not exist. Courageous sincere individual reformers are deeply appreciated and to be applauded, but they are just that—individuals.” He added that the task of Muslim reformers is “convincing Muslims to be peaceful,” as though this were a daunting undertaking.[9] He has also written that “traditional Islam itself is not moderate or peaceful. It is the only major world religion with a developed doctrine and tradition of warfare against unbelievers."[10]

Spencer has been one of a chorus of right-wing voices—also including Geller, Frank Gaffney, Clare Lopez, and David Yerushalmi, to name a few—to agitate against the so-called threat of “creeping sharia” in the United States, and is an avid backer of laws to restrict the consideration of sharia law by U.S. courts. In a March 2012 piece for the American Thinker, Spencer claimed that such laws are increasingly necessary because sharia “has already been involved in cases in twenty-three states,” though he did not name specific instances or elaborate this claim.[11]

Spencer suggested that failure to implement such laws would bring “the stoning of adulterers, cutting off of the hands of thieves, and the denial of basic freedoms for women" to the United States, asserting that “there is no school of Islamic jurisprudence among either Sunnis or Shi'tes that does not mandate stoning for adultery, amputation of the hand for theft, and the subjugation of women.” He claimed additionally, without reference, that “interpretations of the Quran and Sunnah that are more compatible with Western pluralism and liberal democracy than is sharia in its classic formulations…have never gained any significant traction among Muslims.”[12]

He concluded by warning non-Muslims not to oppose such laws on the grounds of civil liberties. “The Islamic state, as delineated by sharia, encroaches on the basic rights of non-Muslims,” he wrote. “It would be a sad irony for non-Muslims to oppose anti-sharia and thereby abet their own subjugation.”[13]

Spencer has praised Newt Gingrich, the 2012 GOP presidential candidate perhaps most amenable to conspiracy theories about “creeping sharia,” as “one of the few major politicians to acknowledge that the problem America faces today from Islamic jihadists is not simply one of terrorism, but of a larger attempt to insinuate elements of Sharia into American society.”[14] He has also extolled Rick Santorum’s declarations that “jihadism is evil” and that “Sharia law is incompatible with American jurisprudence and our Constitution.”[15]

Spencer’s apparent paranoia was on full display in his opposition to the construction of the Park 51 Islamic cultural center in lower Manhattan, which opponents frequently mischaracterized as the “Ground Zero Mosque,” in 2010. As a partner to the equally bombastic Pamela Geller—“Monster Mosque Pushes Ahead in Shadow of World Trade Center Islamic Death and Destruction,” read the headline to one of her earlier posts on the center—Spencer was one of the earliest conservative figures to make the case that the construction of the center was “not just a religious freedom issue.” His gropu, Stop Islamization of America, was instrumental in turning Park 51 from a non-issue into a national lightning rod.[16]

Spuriously calling the center a “13-story mega-mosque at Ground Zero” proposed by “pro-sharia Islamic supremacists,” Spencer claimed that “this is not really a religious freedom issue at all,” but rather a question of “the appropriateness of the location,” suggesting that the center amounted to a kind of victory monument for radical Islamists on the World Trade Center site. “Does the freedom of religion really allow any group to build anything anywhere?” he wondered. “Would the KKK be allowed to build a ‘shrine of reconciliation’ on the site of the black Baptist church bombed by racists in the early Sixties? … Would [New York Mayor Michael Bloomberg] stand up as stoutly for the KKK’s religious freedom as he has for Ground Zero mosque Imam Feisal Abdul Rauf and his gang of Islamic supremacist deceivers?”[17]

At the Conservative Political Action Conference (CPAC) in January 2011, SIOA and its parent organization, the American Freedom Defense Initiative, premiered a film on the subject. In his opening remarks at the conference, Spencer attempted to justify the film’s provocative title, The Ground Zero Mosque: Second Wave of the 9/11 Attacks. “Some people have actually told us they find that [title] offensive,” he said. “How can the Ground Zero Mosque be the ‘second wave of the 9/11 attacks’? Look at history. All through the world, whenever Islamic jihadists conquered a land, they would build a mosque of triumph. … All of [these mosques] are understood universally in the Islamic world, in the areas where they are, as marking the triumph and superiority of Islam.” If the center were completed, Spencer concluded, “the average Muslim on the street … will be more emboldened, will say America is weak, America is conquered, America is ripe for the plucking. This mosque will be the most encouraging development for the Islamic jihad since 9/11 itself.”

The center opened in September 2011 without incident.[18]

Use of Materials by U.S. Government

According to his Jihad Watch biography, Spencer has “led seminars on Islam and jihad for the United States Central Command, United States Army Command and General Staff College, the U.S. Army's Asymmetric Warfare Group, the FBI, the Joint Terrorism Task Force, and the U.S. intelligence community.”[19]

The use of Spencer’s works by the U.S. government proved controversial in the wake of Anders Breivik’s killing spree in July 2011, when it was revealed that at least two of Spencer’s books—The Politically Incorrect Guide To Islam and The Truth About Muhammad—were listed as “recommended reading” for new FBI recruits as recently as January 2009. “It’s been well established that anti-Muslim self-proclaimed counterterrorism experts—often times funded by federal grants—have been giving advice to state and local law enforcement officers for years,” reported Talking Points Memo. “But the fact that the nation’s top law enforcement agency was pointing new federal agents to bigoted material as recently as 2009 came as a surprise to those who have seen this stuff before.” The FBI subsequently claimed that Spencer’s books were no longer listed.[20]

[7] Leah Libresco, "A Few People Lead Many Of The Anti-Muslim Groups In The U.S.,” FiveThirtyEight, May 5, 2015,http://fivethirtyeight.com/datalab/a-few-people-lead-many-of-the-anti-muslim-groups-in-the-u-s/