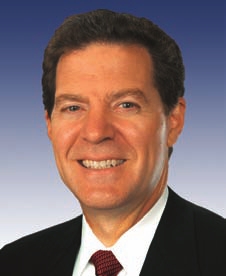 Sam Brownback, a deeply conservative Republican Party figure, was appointed U.S. Ambassador-at-Large for International Religious Freedom by President Donald Trump in 2017. He previously was governor of Kansas and served in the Senate and the House of Representatives. Initially elected governor in 2010, Brownback was re-elected in 2014, leaving before the end of his second term when he was confirmed for his ambassador role.

Brownback arrived in Washington in 1990 as a White House Fellow working under U.S. Trade Representative Carla Hills during the George H.W. Bush administration. In 1994, he was elected to the House of Representatives as part of a wave of Republican victories that gave the GOP control of Congress. Self-described as a member of the “hard core” that drove the party’s anti-big government agenda, Brownback won the 1996 election for the Senate seat vacated by Bob Dole. He won a full term in 1998 and was reelected in 2004. Brownback lost his bid for the Republican nomination for president in 2008. 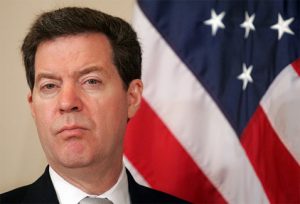 During is time in Congress, Brownback gained a reputation as one of Congress’ leading social conservatives.[1] An important promoter of the “war on terror” in the years after the 9/11 attacks, Brownback has supported a host of hardline “pro-Israel” policies and served on the board of the right-wing Jerusalem Summit.[2]

Brownback’s term in Kansas featured a large tax cut that reduced the state’s revenues to such a great extent that the Republican-dominated legislature rescinded the cut, overriding Brownback’s veto[3] to do so.[4]

Brownback is primarily known for his leadership in advancing the domestic agenda of the religious right. However, he has also played a leading role in several foreign policy issues, particularly regarding Iran and other “rogue nations.” A staunch supporter of the George W. Bush administration’s Mideast policies, Brownback nonetheless eventually opposed some Bush policies, including the Iraq troop “surge.”[5]

Describing his foreign policy priorities post-September 11, Brownback’s Senate website once stated: “Since September 11, 2001, it is increasingly clear that national security must be at the forefront of our overall foreign policy. As we face the threat of terrorism, as well as threats by rogue nations such as Iran and North Korea, it is more important than ever that we have a coherent, strong, and wise foreign policy. As we continue to wage the war on terror in Iraq and Afghanistan, we must look ahead to the prospect of these countries serving as models for freedom and democracy in an otherwise troubled region.”[6]

Along with other hawkish Republicans like Sen. Jon Kyl (R-AZ), former Rep. Christopher Cox (R-CA), and former Sen. Rick Santorum, Brownback consistently targeted Iran in proposed legislation. In May 2006, for instance, Brownback introduced the Iran Human Rights Act, which he said would provide Iranians “with the tools and education to effect regime change from within.”[7]

His get-tough posture on Iran, as well as his Israel-centric vision of Mideast peace, won him friends among neoconservatives and other hawkish political factions. Lauding a July 2003 Brownback Senate amendment supporting democracy in Iran, former American Enterprise Institute (AEI) scholar Joshua Muravchik, speaking on behalf of the Coalition for Democracy in Iran, said: “This amendment is an important milestone in the relationship between the U.S. Congress and the people of Iran. It sends a message to the Iranian people that the American people are aware of their struggle to free themselves, and that we want to do what we can to help. The days of waiting for the Iranian regime to reform itself are over.” At an AEI forum on Iran in 2006, the institute’s Danielle Pletka introduced Brownback as “an activist” and “a true believer.”[8]

In addition to his initiatives on Iran, Brownback was also a lead author of bipartisan legislation on human rights in North Korea and with respect to international trafficking of women. For example, he coauthored the Trafficking in Victims Protection Act with the late Sen. Paul Wellstone (D-MN).

A key issue for Brownback has been Israel, about which he holds views closely in line with Christian Zionism. Along with noted neoconservative ideologue Daniel Pipes, Brownback has served on the presidium of the Jerusalem Summit, a now largely defunct Israel-based advocacy outfit that brought together evangelicals, neoconservatives, and hardline pro-Israel figures from across the globe in an effort to shape the debate over the status of Palestine, militant Muslim groups, and other hot-button Mideast issues.

According to a Jerusalem Summit press release describing a speech Brownback made to Israel’s Knesset in 2004, the senator “called for the immediate move of the American embassy to Jerusalem, supported Israel’s right of self-defense in the face of Palestinian terror and warned of dangers posed in the region by U.S. military aid to Egypt. Senator Brownback also spoke at length about America’s and Israel’s shared democratic values and the rise of democracy around the world. ‘There are only 46 non-democratic countries remaining in the world today, and we are on the path to making that zero,’ the Republican leader stated.”[9]

In 2007, Brownback backed a plan by the head of the far-right Israeli party, National Union. The plan called for abandoning the two-state solution, for Israel to annex the entire West Bank (and “encourage” the millions of Palestinians living there to move to Jordan), and to withdraw recognition of the Palestinian Authority. [10]

Although a frequent advocate of human rights, Brownback’s support for war on terror and free-trade policies has at times seemed to take precedence over his concern about human rights. In a May 21, 2002 Senate statement, for example, Brownback advocated that permanent normal trade relations status be extended to Russia and the nations of Central Asia and the South Caucasus—many of which are gross violators of human rights. He recommended that language be included in such an act that would recognize “the considerable efforts the nations of Central Asia and the South Caucasus have made in assisting our antiterrorism efforts.”[11]

The politics of oil, too, have played a part in Brownback’s calculus: “Russia owns immense fossil fuel reserves which could reduce our dependence on oil from the volatile Middle East.” He added, “Kazakhstan, Turkmenistan, Uzbekistan, and Azerbaijan are also valuable sources of oil. Kyrgyzstan has made impressive progress in making market reforms since its days as a Soviet Republic, which can provide fertile ground for American investment. Georgia is making significant progress toward market reforms.”[12]

Despite his hardline support for many Bush administration policies, Brownback at times demonstrated bipartisan foreign policy inclinations: “Sen. Brownback (R-KS) has been a leading voice in Congress for U.S. action in Darfur. With [Barack] Obama, Brownback wrote an op-ed for the Washington Post in December 2005 calling on the United States to ‘help transform the African Union protection force into a sizable, effective multinational force.’  He introduced the Darfur Peace and Accountability Act in 2005, which urged U.S. military intervention. In 2006, Brownback traveled to the region with Obama. Brownback cosponsored then-Senator Joe Biden’s July 2007 resolution demanding the deployment of an international peacekeeping force to Darfur.”[13]

According to the National Journal‘s “Conservative on Foreign Policy” rankings, in 2005, Senator Brownback voted more conservatively on foreign policy issues than 74 percent of U.S. senators.

Brownback cites William Wilberforce as a major influence in his social activism. Like many others in the international Christian solidarity movement, Brownback sees his work as a 20th-century extension of the activism of Wilberforce, an evangelical Christian who as a member of the British parliament in the late 18th century and early 19th century led the fight to terminate the slave trade.[14]

Brownback played an early role promoting the Christian solidarity movement on the Hill. Two of the early intellectual influences of this movement, which emerged in the late 1990s, were Michael Horowitz, a neoconservative at the Hudson Institute, and Nina Shea of Freedom House. In his November 2001 article on the Christian solidarity movement, Joshua Green wrote: “Horowitz enlisted Beltway heavyweights like Chuck Colson, James Dobson, and William Bennett, and appealed to members of Congress like Frank Wolf and Chris Smith in the House, and Arlen Specter and Sam Brownback in the Senate.”[15]

Brownback chaired a May 16, 2000 hearing of the Senate Foreign Relations Committee on religious freedom, which included testimony from Shea and Iran-Contra veteran Elliott Abrams. “There has been a stunning shift in foreign policy in the last three years involving a recognition of religious liberty as a respected human right, equal to the freedoms of press, speech, or assembly,” Brownback said. “This was not true, even a few years ago, when members of Congress and foreign affairs intelligentsia were reluctant to seriously entertain this topic. I am grieved by the suffering which results from embracing a minority faith in a hostile country. I think of the countless people in closed countries like China who may never hear a religious message that would comfort their souls in troubled times or give meaning to their lives. It may be fair to say, that of all the rights a country might steal from its people, religious freedom is the most intimate one.”

New York Times columnist Nicholas Kristof once described Brownback as “the most intriguing man in Washington—wrong on so much and yet such a leader on humanitarian issues.”