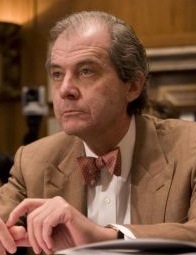 Mark Palmer, a former ambassador to Hungary and presidential speechwriter, is a longstanding promoter of democracy who has worked for a number of neoconservative-aligned groups. He served in the State Department during the Nixon, Ford, Carter, Reagan and Bush Sr. administrations.[1] A former vice chairman of Freedom House, Palmer is vice president of the Council for a Community of Democracies (CCD) and the president of the investment firm Capital Development Company LLC.[2] Palmer has also been a member of the Committee on the Present Danger an adviser to the Project on Middle East Democracy.

On the website of the Committee on the Present Danger (CPD), Palmer is quoted as saying, “The world’s last 43 dictators have created the conditions in which terrorists thrive—either by funding and directing them, or in reaction to the dictator’s corruption and abuse. Helping oppressed peoples in these remaining dictatorships to achieve their freedom, most often through organized non-violent campaigns which worked on nearly every continent over the past three decades, must be at the center of any strategy to eliminate terrorism.”[3]

Despite his frequent association with neoconservatives, Palmer is generally more dovish than them. For instance, Palmer authored a 2004 report for the CPD that focused on "peaceful" strategies to achieve regime change in Iran. While reserving "the right to take out or cripple [the country’s] nuclear capabilities" if Tehran fails to comply with agreements on its nuclear program, the paper advocated re-opening the U.S. embassy in Tehran and strengthening people-to-people engagement—particularly among young Iranians who are purportedly especially alienated—as well as greater use of television, radio, and the Internet to "communicate directly with the Iranian people."[4]

Palmer told one journalist that some members of the CPD—which is dominated by neoconservatives and other hardliners—were opposed to the report because it sounded too much like “engagement” with Tehran. "There was concern that [sending an ambassador to Tehran] would strengthen or legitimize the regime as it is," said Palmer. "Our view was that was too narrow a view," he added, noting that the United States had embassies in Soviet bloc nations in the 1980s, but still supported democratic forces which led to the mainly peaceful ouster of the Communist regimes.[5]

According to Foreign Policy in Focus contributor Anthony Fenton, Palmer was instrumental in promoting the Advance Democracy Act (ADA). First introduced in 2005, ADA was signed into law on August 2007. The initial ADA bill, according to Fenton, “was loosely based on a 2003 book by former ambassador, presidential speechwriter, and long-time democracy promoter Mark Palmer, Breaking the Real Axis of Evil: How to Oust the World's Last Dictators by 2025. Palmer and some colleagues from the Hudson Institute wrote the original bill itself.” Fenton adds that “Palmer was also instrumental in the creation of the [National Endowment for Democracy] and wrote President Reagan's 1982 speech to the British parliament, ‘Promoting Peace and Democracy,’ during which the president pledged to create new institutions that would help lead a ‘global campaign for democracy.’”[6]

In "The Real Axis of Evil," an article published on the website of the Council for a Community of Democracies, Palmer writes, “In January 2002, when President Bush defined the 'axis of evil' as the dictatorships of Iraq, Iran and North Korea, he did not even mention Charles Taylor of Liberia. But this one-time warlord and escapee from an American prison is part of the real axis of evil—the larger group of 44 dictators in an arc that runs unbroken west from North Korea and China through the Middle East and south to sub-Saharan Africa. … Collectively, these 44 men (no women) are overwhelmingly the largest threat to American and global security and prosperity, and they do work together. Until they are all ousted, we will know no permanent peace.”[7]

In June 2006 testimony to the Senate Foreign Relations Committee, entitled "Promotion of Democracy by Nongovernmental Organizations: An Action Agenda," Palmer called for the "radical strengthening of our primary frontline fighters for freedom"—namely, NGOs. Palmer lamented the fact that U.S. NGOs and "their governmental and private funders" have not made the funding of foreign NGOs involved in building "national movements" their primary objective. He advocated a major increase in government funding for "NGO programs focused on dictatorships."[8]

More recently, Palmer has been a vociferous advocate of boosting U.S. support for technologies that allow internet users to evade censors in places like China and Iran. At a congressional hearing in late March 2010, Palmer sharply criticized Washington’s purported slowness in providing funds for the GlobalInternetFreedom Consortium, which has developed an internet circumvention system. Citing Sen. Sam Brownback (R-Kan.), who earlier had called for the immediate release of funds for intern circumvention technology, Palmer said that the major obstacle was the U.S. State Department, which he claimed had failed to make proper use of funds provided it by Congress. Said Palmer, “I have never been more appalled at the State Department’s refusal to do what is so clearly in the national interest of the United States.”[9]

“In the U.S. State Department from 1964 to 1990, [Palmer] specialized and served in the communist countries, wrote speeches for six secretaries of state and three presidents, including President Reagan’s speech to the British Parliament in 1982 which led to the establishment of the National Endowment for Democracy, and was Deputy Assistant Secretary of State for the Soviet Union and Eastern Europe and then U.S. Ambassador to Hungary during the crucial period for bringing down Europe’s communist dictators. For his contributions to assisting with the liberation of Poland, the Baltic States, and Hungary, he has received awards from democratic governments and human rights organizations. After the fall of the Berlin Wall, Ambassador Palmer became an investor in the former communist countries, including establishing the first national independent commercial television stations in six countries, and building a major real estate complex at Checkpoint Charlie in Berlin. He is President of Capital Development Company LLC, which invests in the United States and overseas. Ambassador Palmer is Vice Chairman of the Center for Communications, Health and the Environment and also serves on the boards of the International Centre for Democratic Transition, Council for a Community of Democracies, SAIS Johns Hopkins University, Institute for the Study of Diplomacy at Georgetown University, American Academy of Diplomacy, Freedom House and New Tang Dynasty Television. He graduated from Yale University in 1963, Phi Beta Kappa and Magna Cum Laude.”[10]

[7]Mark Palmer, “The Real Axis of Evil,” undated, Council for a Community of Democracies http://www.ccd21.org/news/axis_evil.htm.

[10]Council for a Community of Democracies, “Mark Palmer,” http://www.ccd21.org/about/board/palmer.html.