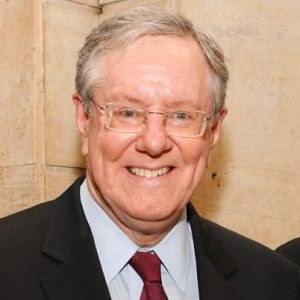 Malcolm Stevenson “Steve” Forbes Jr., head of the Forbes magazine empire, has supported a number of militarist policy organizations that have pushed for U.S. military intervention overseas. Twice a candidate for the Republican presidential nomination, Forbes has used his company, which was founded by his grandfather in the early 1900s, as a tool of his political ambitions.[1]

During the 2016 presidential primary and elections, Forbes frequently chided the political establishment for  “complaining” about Donald Trump.[2] He later endorsed Trump, saying that the real estate was “absolutely unique.” Since Trump’s election, Forbes has remained largely silent on many of the controversies that have plagued the administration, instead focusing attention on his bread-and-butter policy issue, tax reform. In a 2017 New York Times op-ed that he coauthored, Forbes urged Trump to quickly push through a tax overhaul, including cuts for corporations and more privately funded infrastructure investments, among other conservative agenda items. Failure to pass tax reform early in the administration, Forbes argued, could stall the purported “Trump bounce.” 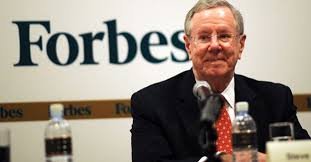 Though he often portrays himself as a Washington outsider, Forbes has been a leading figure for more than two decades among conservative political elites. During the Reagan years, Forbes was an important funder of what reporter Glenn Frankel called the “supply-side, tax-cutting wing of the Republican Party.”[3] Forbes continues to be one of the most notable and adamant advocates for supply-side economics, which promotes cutting taxes on the theory that doing so increases revenues.

While the “flat tax,” which in contrast to graduated taxes (typical in most of the industrialized world) would impose a single “flat” tax rate on all income levels, is his best-known contribution to rightist political discourse, Forbes has been a longtime proponent of hardline interventionist foreign policies. He has served on the boards of several right-wing and neoconservative organizations, including the Clifford May-led Foundation for the Defense of Democracies (FDD), the Heritage Foundation, Freedom House, and Empower America. He was a member of the Committee on the Present Danger, an advocacy group that promoted Bush administration “war on terror” policies.

In 1985, President Ronald Reagan appointed Forbes as head the Board of International Broadcasting (BIB), the bipartisan government organization that then ran Radio Free Europe/Radio Liberty. During his tenure from 1985 to 1993 Forbes helped ensure that the radio station, which was made famous for its anticommunist broadcasts into the Soviet Union during the Cold War, was properly funded.[4] (More recently, the organization has been involved in “war on terror” messaging campaigns broadcast into the Middle East.)[5]

At the end of his tenure with the BIB, Forbes received the “Keeper of the Flame Award” from Frank Gaffney‘s Center for Security Policy, an award the center gives to people for “devoting their public careers to the defense of the United States and American values around the world” and working to uphold the organization’s credo of “peace through strength.”[6] Fellow awardees have included Caspar Weinberger, Newt Gingrich, Donald Rumsfeld, and Paul Wolfowitz.

Along with Jack Kemp, William Bennett, and Jeane Kirkpatrick, Forbes helped found Empower America in the mid-1990s, a conservative think tank in Washington, D.C. that advocated right-wing, small government domestic policy based on supply-side economics, as well as a security policy that called for a larger military and a missile defense system.[7] He continues to serve on the board of the organization’s successor, FreedomWorks.[8]

Forbes was a signatory to the 1997 founding statement of principles of the neoconservative-led Project for the New American Century (PNAC). The statement laid out a number of foreign policy principles that served as a basis for neoconservative advocacy efforts in the years leading up the election of George W. Bush, including the use of preemptive force, arguing that “the history of the 20th century should have taught us that it is important to shape circumstances before crises emerge, and to meet threats before they become dire.”[9]

Forbes has been a vociferous critic of President Barack Obama’s foreign policy, stating in December 2015: “Obama has a rigid view of the world from which, apparently, nothing can shake him. To his mind, the root cause of what afflicts the globe is Western imperialism and the evil results it left in its wake. Concurrently, the U.S. has been a malignant force beyond its shores.”[10]

He added in the same piece: “In his worldview we and the evil Europeans are the serpents who despoiled the Garden of Eden and we must now suffer the consequences.”[11]

Forbes strongly denounced the July 2015 nuclear agreement reached between Iran and six world powers, telling Israeli Prime Minister Benjamin Netanyahu in an interview at the time that the deal puts “the very safety of the U.S. itself at stake.”[12] In a September 2015 article, Forbes also claimed that the “Iran accord will profoundly impact our security and that of civilization itself.”[13]

After the November 2015 terrorist attacks in Paris, Forbes made several recommendations for “steps” that he said should be taken to “somewhat mitigate the damage of Obama’s final year in office.” One step would involve firing Pentagon lawyers: “The Pentagon employs thousands of lawyers who put restrictions on our armed forces. … Congress should eliminate their appropriations.” He also called for Congress to pass a resolution that would establish a “safe haven in Syria” and a “region of Sunni autonomy within Iraq.”[14]

Forbes has also been a strong advocate of NATO expansion, writing in 1998, “A bigger NATO would forcefully tell reactionary communists and xenophobic nationalists that their fantasies of reestablishing a Soviet-style empire will remain just that. And democratic forces in Russia would thereby be strengthened.”[15]

In helping found the Foundation for the Defense of Democracies in 2002, Forbes teamed up with a formidable cast of neoconservative figures, including Clifford May, James Woolsey, and Sen. Joseph Lieberman (I-CT), in championing a hardline view of Middle East policies that became the central theme of the war on terror.[16] He serves on the FDD board, and, like many neoconservative commentators, has demonstrated a fear of Islam, writing in 2006 in his weekly Forbes column, “We suffered many setbacks and lost many battles during the Cold War, yet we triumphed in that 40-year struggle. Ultimately we will defeat Islamic fanaticism.”[17]

During the 2006 Israel offensive against Hezbollah in Lebanon, Forbes spoke out against a cease-fire agreement. In a Fox News interview he said, “I think the answer is to cripple Hezbollah. They have … violated routine agreements in the past. They provoked this. A cease-fire will simply put off the day of reckoning. Lebanon will never get democracy with that force there. I think the Israelis are right to realize it’s now or never.”[19]

Similarly, in response to the 2006 Iraq Study Group, which recommended a diplomatic course in pushing regional peace in the Middle East, Forbes channeled the rhetoric of neoconservatives who were critical of the group’s conclusions. Discussing the study group’s report, he said, “This idea of flipping Syria sounds like Neville Chamberlain talking about flipping Mussolini from Hitler in the 1930s. I don’t know what these people were inhaling. It’s not going to happen. And, if it does happen, it’s going to come at a severe price, which the Israelis are not going to accept.” In the same interview, Forbes said of Iran that it “is trying to build 25 nuclear weapons each year. It intends to use those weapons. It has a lunatic who has made it very clear what he wants to do with them. And this doesn’t deal with that.”

In 1996, Forbes ran for the Republican presidential nomination on a platform that emphasized a regressive flat tax of 17 percent, but lost the nomination to Sen. Bob Dole (R-KS). Forbes tried and failed again to secure the Republican Party nomination in 2000. In his second run, Forbes shifted away from his fiscally conservative platform and embraced socially conservative issues that highlighted his Christian faith. In 1999 a Forbes campaign insider told Salon.com, “I don’t think he’s had a change in heart on the issues, I just think he’s had a change in priorities. He was always pro-life, but now he’s out saying he’d protect life first and foremost, even before the flat tax, and that is definitely a change in priorities. Sure, there’s an element of pandering in that. But in ’96 Steve underestimated conservative voters in Iowa and South Carolina and their commitment to pro-life issues.”[20]

Forbes reportedly spent $80 million of his own money on the two presidential bids, selling off some of his stock in the Forbes empire to fund his political ambitions.[21] During his time in the political spotlight, Forbes was critical of the Clinton administration’s defense policy, stating in a 1998 speech at the Center for Security Policy that Clinton had severely reduced U.S. military readiness, which could undermine U.S and global economic stability. “We live in a time of relative peace and rising prosperity,” Forbes said. “But this did not happen by magic. The international economic order rests upon a foundation built by free markets, free elections, and the strong and vigilant moral and military leadership of the U.S.”[22]

In 1999, in the midst of campaigning, Forbes’ book A New Birth of Freedom was published, highlighting his policy positions on everything from defense spending to economic policy and education reform.[23] In the book, Forbes criticized the Anti-Ballistic Missile Treaty and the decrease in percentage of GDP spent on defense, among other things.[24]

Forbes served as national campaign co-chair and senior policy advisor to Rudy Giuliani during Giuliani’s failed campaign for the 2008 Republican presidential nomination, saying that, “Rudy Giuliani showed how exercising fiscal discipline—including tax cuts—lowers deficits, spurs economic growth and increases revenue. It is time the rest of the country benefit from a true fiscal conservative leader who gets real results.”[25] After Giuliani dropped from the race, Forbes endorsed Sen. John McCain (R-AZ) and began serving as his economic advisor.[26] Also during the 2007 primary campaign, Forbes donated money to the Ron Paul campaign.[27]

[18] “Russia, Iran and the Bomb: What Should the Bush Administration Do?” Heritage Foundation,http://www.heritage.org/Press/Events/ev062705a.cfm.