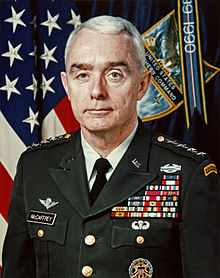 Barry McCaffrey is a retired U.S. Army general who served as the country’s chief anti-drug official under President Bill Clinton. A prominent TV commentator and policy pundit, McCaffrey regularly appears on NBC  news commenting on foreign policy and national security issues. He is also the owner of McCaffrey Associates LLC, a consultancy firm.

A one-time enthusiast for an aggressive “war on terror,” McCaffrey eventually became a skeptic of U.S. military intervention in Iraq and elsewhere after the conflict in Iraq became a counterinsurgency war. More recently, McCaffrey has been an outspoken critic of Donald Trump‘s choice for National Security Adviser, retired U.S. Army Lieutenant General Michael Flynn. During a December 2016 appearance on NBC News, McCaffrey said that many of Flynn’s tweets pushing fake news stories “border on the demented” and he withdrew his support for his candidacy. 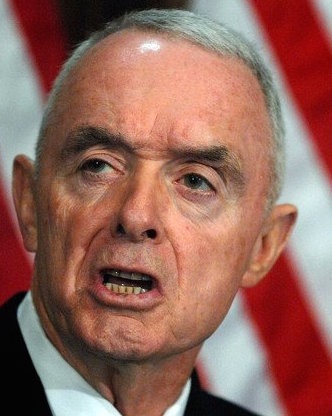 McCaffrey for many years was a close collaborator with neoconservative ideologues promoting U.S. war aboard. He served on the board of the now-defunct Committee for the Liberation of Iraq, an advocacy group founded in 2002 to promote war with Iraq as a step toward “regional peace, political freedom, and international security.” Joining McCaffrey was an elite crowd of neoconservative ideologues and hawkish public officials associated with the Project for the New American Century (PNAC), including Sen. John McCain, Sen. Joe Lieberman, former UN Ambassador Jeane Kirkpatrick, and ex-CIA chief James Woolsey.[1] McCaffrey was also a signatory to PNAC’s 2005 letter to congressional leaders calling for funding to increase the size of the military ground forces in order to meet the “generational commitment” of the wars in Iraq and Afghanistan.[2]

During this period, McCaffrey’s purported objectivity in assessing U.S. security policies repeatedly aome under scrutiny due to his ties to Pentagon officials and financial interests in military contractors that benefited from the decision to go to war in Iraq.

Jeremy Scahill once described McCaffrey as a retired general-turned-TV analyst who profited from hyping up fear about alleged threats. Scahill said in January 2015: “I’ve spent a lot of years investigating how the war contracting industry works. You’ll have these retired generals come on CNN, MSNBC, FOX and they’ll talk about a dangerous group in a particular country and they’re on the board of a huge weapons manufacturer or a defense company that is going to benefit from an extension of that war, an expansion of that war.”[3]

He added: “Perhaps the biggest violator of that is General Barry McCaffrey, who has made a tremendous amount of money off of war contracting and then he’s brought onto these networks and treated as just an objective observer.”[4]

In April 2008, the New York Times identified McCaffrey as one of several dozens retired military officers (including Paul Vallely and Thomas McInerney) who were part of a controversial Pentagon program that sought to publicize favorable views of U.S. policies in the Iraq War by debriefing analysts before their appearances on TV news programs.[5] Without explicitly saying how McCaffrey was advised by the Pentagon, the newspaper reported: “Two of NBC’s most prominent analysts, Barry R. McCaffrey and the late Wayne A. Downing, were on the advisory board of the Committee for the Liberation of Iraq, an advocacy group created with White House encouragement in 2002 to help make the case for ousting Saddam Hussein. Both men also had their own consulting firms and sat on the boards of major military contractors.”[6]

While the author of the New York Times article went on to receive a Pulitzer Prize for the piece, there was next to no media backlash against McCaffrey. Journalist Glenn Greenwald wrote in 2012: “Despite Barstow’s Pulitzer, neither Brian Williams nor anyone else at NBC News ever mentioned any of these groundbreaking stories to their viewers (even as Williams reported on other Pulitzer awards that year); the controversy over the Pentagon propaganda program was simply suppressed. And NBC continued to feature those same ex-Generals as ‘analysts’—including McCaffrey—as though the whole thing never happened.”[7]

McCaffery voiced his opposition to the July 2015 landmark nuclear deal between Iran and six world powers including the United States, calling it a “deeply flawed agreement.”[9] He has called for sending “3,000 or 4,000” U.S. troops into “Jordan and Saudi Arabia and Iraq and Turkey” to “conduct very direct lethal operations against ISIS on the ground.”[10]

In August 2014, McCaffrey joined the board of directors of Excelitas Technologies Corp, which provides lighting and sensor components to the defense industry.[11]

A 2003 investigation by the Nation highlighted McCaffrey’s and Downings’ ties to the defense industry and groups like the Committee for the Liberation of Iraq as being “offscreen commitments [that] raise questions about whether they are influenced by more than just ‘a lifetime of experience and objectivity’—in the words of Lieut. Gen. Barry McCaffrey, a military analyst for NBC News—as they explain the risks of [the Iraq War] to the American people.” To underscore what the Nation called McCaffrey’s “vested interest” in Operation Iraqi Freedom, the magazine outlined his various corporate connections: “McCaffrey, who commanded an infantry division in the Gulf War, is now on the board of Mitretek, Veritas Capital, and two Veritas companies, Raytheon Aerospace and Integrated Defense Technologies–all of which have multimillion-dollar government defense contracts. … Since IDT is a specialist in tank upgrades, the company stands to benefit significantly from a massive ground war. McCaffrey has recently emerged as the most outspoken military critic of Rumsfeld’s approach to the war, but his primary complaint is that ‘armor and artillery don’t count’ enough. In McCaffrey’s recent MSNBC commentary, he exclaimed enthusiastically, ‘Thank God for the Abrams tank and… the Bradley fighting vehicle,’ and added for good measure that the ‘war isn’t over until we’ve got a tank sitting on top of Saddam’s bunker.’ In March alone, IDT received more than $14 million worth of contracts relating to Abrams and Bradley machinery parts and support hardware.”[12]

As the Nation noted, McCaffrey did eventually become a fierce critic of the way the George W. Bush administration handled the war and occupation of Iraq. He said on NBC’s Nightly News in August 2006, “Well, I think some of the debate over civil war is absolutely nonsense. It’s been a civil war for a couple of years. Thousands are being killed and wounded. It is clearly a struggle between the Shia, the Sunni, and to some extent the Kurds. Secretary [Donald] Rumsfeld, in my judgment, is increasingly going to become irrelevant to this debate. The ambassador on the ground, [Zalmay] Khalilzad, General George Casey, General John Abizaid and the White House are going to have to sort this out. It’s a very bad situation, and it’s getting worse.”[13]

Before being appointed director of the White House Office of National Drug Control Policy during the second Clinton administration, McCaffrey was a four-star general who, according to his biography on the web site of his consulting firm McCaffrey Associates, “at retirement … was the most highly decorated serving General, having been awarded three Purple Heart medals for wounds received in his four combat tours.”[14] Arguably he is best known for his controversial role as a general during the first Gulf War. In a 2000 investigative report for the New Yorker, Seymour Hersh reported on allegations made in an anonymous letter sent to military officials that McCaffrey’s actions during the war amounted to war crimes, especially his orchestration of the infamous “turkey shoot,” during which “Apache attack helicopters, Bradley fighting vehicles, and artillery units from the 24th Division pummeled the 5-mile-long Iraqi column for hours, destroying some 700 Iraqi tanks, armored cars and trucks, and killing not only Iraqi soldiers but civilians and children as well. Many of the dead were buried soon after the engagement, and no accurate count of the victims could be made.” According to Hersh, MccAffrey 24th Division repeatedly fired on Iraqi civilians, POWs, and fleeing soldiers who did not return fire. Although an Army investigation found no merit to the allegations McCaffrey, many of the soldiers who served under him and some Army higher ups remained convinced that he was guilty. “Those who wanted to tell all about events that would tarnish the reputation of Barry McCaffrey—men like Sergeant Larimore and Edward Walker—found that their firsthand testimony wasn’t enough. Without physical or documentary evidence—without some Iraqi bodies—the C.I.D. Army’s Criminal Investigations Division] would not consider pressing charges. Others who would have talked, such as Captain Mike Bell and his young colleagues in McCaffrey’s assault command post, were not contacted. Some common understandings did emerge. General Peter Barry, the C.I.D.’s commanding officer, assured me that by the time the investigation shut down some of the Army’s senior leaders realized that there was ‘a certain element of truth’ to the allegations made by the anonymous letter writer. ‘Whoever wrote the letter had detailed knowledge,’ Barry said. ‘But establishing the criminality is difficult.’”[15]

After the Gulf War and the investigation into his conduct, reported Hersh, McCaffrey was promoted from two- to four-star general and given an “unwanted assignment, according to his aides, as commander-in-chief of the Southern Command, then based in Panama City, which was responsible for all American military forces in Central and South America. In 1996, he retired from the Army to join the Clinton Administration as the director of the Office of National Drug Control Policy—the White House drug czar. The appointment was widely seen as one that would boost Bill Clinton’s standing with the military in an election year and put a hero of the Gulf War to work on America’s other war. McCaffrey’s new war is in Colombia, where he is the Administration’s most enthusiastic supporter of a greater American military presence to counter the increasing strength of anti-government guerrilla groups.”

During his tenure as Clinton’s drug czar, McCaffery was accused of undertaking a media “propaganda” campaign reminiscent of the Pentagon’s campaign reported by the New York Times in 2008. According to Salon.com, in the late 1990s, when advertising revenue for dot-coms skyrocketed, network TV channels began to balk at contractual arrangements they’d made with the government to run anti-drug ads. McCaffery’s Office of National Drug Control Policy offered a compromise, reported Salon.com, “The office would give up some of that precious ad time it had bought — in return for getting anti-drug motifs incorporated within specific prime-time shows. That created a new, more potent strain of the anti-drug social engineering the government wanted. And it allowed the TV networks to resell the ad time at the going rate to IBM, Microsoft or Yahoo.” As a result, popular shows like “ER,” “Beverly Hills 90210,” “Chicago Hope,” “The Drew Carey Show,” and “7th Heaven” that began running anti-drug messages. According to Salon, “government officials and their contractors began approving, and in some cases altering, the scripts of shows before they were aired to conform with the government’s anti-drug messages.”[16]

Commenting on the White House program, Jay Schwartzman, president of the public interest law firm Media Access Project, told Salon, “This is the most craven thing I’ve heard of yet. To turn over content control to the federal government for a modest price is an outrageous abandonment of the First Amendment … The broadcasters scream about the First Amendment until McCaffrey opens his checkbook.”[17]