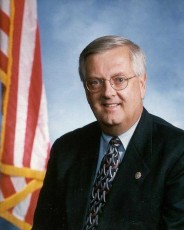 Curt Weldon is a former 10-term Republican congressman from Pennsylvania known for his support of hawkish U.S. foreign policies, including extravagant missile defense programs and an expansive “war on terror.” Weldon lost to Democratic challenger Joe Sestak in the 2006 midterm elections in part because of his close association to the George W. Bush administration’s pro-war agenda. Weldon was also tied to numerous scandals that broke during the run-up to the election regarding his cozy relations with an Italian weapons manufacturer and other foreign businesses.[1]

Despite being the focus of a federal probe for alleged influence peddling (he was never indicted), Weldon was able to capitalize on his long experience on Capitol Hill after leaving office. He has been an executive at a defense contactor—Defense Solutions—served on the boards of various companies, including Novo Energies Corporation, and represented a host of other businesses.[2]

In April 2011, Weldon drew media attention when he went to Libya to meet with Muammar el-Qaddafi, purportedly to ask him to relinquish power. Weldon failed to meet with Qaddafi during the trip, which was paid for by Houston-based oil lobbyists.[3] In an op-ed published in the New York Times while he was in Libya, Weldon said that he was in the country as “the leader of a small private delegation, at the invitation of Colonel Qaddafi‘s chief of staff and with the knowledge of the Obama administration and members of Congress from both parties. Our purpose is to meet with Colonel Qaddafi today and persuade him to step aside.” He argued that although it was time for Qaddafi to step down, his son Saif—who would later be charged with war crimes—was “a powerful businessman and politician [who] could play a constructive role as a member of the committee to devise a new government structure or Constitution.”[4]

Several observers noted at the time that Weldon has long-standing business ties to Libya and the Qaddafi family that date back to his time in the House, when he made several official visits to the country. Reported the Huffington Post, “The ex-congressman's ties to the onetime pariah state extend beyond his time in office, which lasted until 2007. Soon after his most recent trip to Libya in 2008, in which he bragged that he had become the ‘1st non-Libyan Board Member of the Ghadaffi Foundation [sic]’ and introduced several American businessmen to Libyan government officials, a defense manufacturer which counted Weldon as a key executive and adviser drafted a proposal to ‘refurbish the country's fleet of armored vehicles, including its T-72 tanks, BMP-1 infantry fighting vehicles, and BTR-60 armored personnel carriers,’ reported Wired.com in 2008. (The deal was never carried out, and Defense Solutions' CEO claimed his signature on the proposal was a forgery.)”[5]

Continued the Huffington Post, “Weldon proudly noted his two-hour meetings with Gaddafi in 2004 and 2005, a private dinner in London with Saif in December 2003 and his ‘1st and only speech by an American’ to Libya's annual Great Jamahiriya, televised live on al-Jazeera TV. The former congressman also describes how he co-chaired the inaugural U.S.-Libyan Economic Summit with Saif in 2004, organized and co-chaired an international conference in Tripoli with Saif in July 2005 and ‘has maintained ongoing relations with Ghadaffi, his sons’ and a long list of Libyan government officials.”[6]

During his time in the House, Weldon gained a reputation as one of Congress’ most militant hawks, especially on missile defense and Iraq. While serving as a senior member of the House Armed Services Committee and former chair of the Military Research and Development Subcommittee, Weldon described himself as "the leading House supporter of a national missile defense to protect America's families and communities" in his House bio.

Summarizing Weldon's views, Ari Berman wrote in a 2006 article for the Nationthat the congressman "believes there are weapons of mass destruction in Iraq. He claims a secret Pentagon unit, Able Danger, identified 9/11 ringleader Mohamed Atta two years before the World Trade Center attacks and covered it up. He wrote a book last year alleging that Iran was plotting to hit the U.S. homeland."[7]

Weldon's conspiratorial views were on full display in the weeks before the 2006 midterms after news broke of official investigations into his relationships with foreign businesses, including the Italian arms manufacturer Finmeccanica.[8] According to the New York Times, although the Justice Department refused to comment on the Finmeccanica allegations, officials acknowledged that the department was investigating Weldon's connections to a number of foreign firms, including whether he "used his position to steer almost $1 million in consulting contracts from a Russian energy company and other Eastern European interests to a lobbying firm headed by his daughter Karen."[9]

A frequent booster of military hardware deals for the company, Weldon saw that his suburban Philadelphia district—along with his friends and family—benefited from the company's largesse in recent years. The company broke ground on a $27 million expansion in Philadelphia in November 2005 and employed a number of Weldon associates at its subsidiaries.

Responding to the investigation, Danielle Brian, executive director of the Project on Government Oversight, told the Times: "Doesn't the congressman have to register as a foreign agent? It's always disturbing when a member of Congress goes to bat for a particular company. It is even more alarming when the company is foreign. When it comes to national security, you want the best products, not products from companies with a relationship to a member of Congress."[10]

In September 2006, the Citizens for Responsibility and Ethics in Washington (CREW) included Weldon on its list of the "20 most corrupt members of Congress." Responding to the report, Weldon's spokesperson charged that CREW was a "front group for liberal Democrats who have a partisan ax to grind against Republicans"[11]

According to the Nation's Berman, the scandal allegations, coming so close to the midterms, "brought out the vicious, conspiratorial side of Weldon that's earned him national notoriety and prompted National Journal to ask, 'Is he crazy?'" The key element of the purported conspiracy was Weldon's claim that the Justice Department was out to get him and was spurred to action by "left wing liberal activists" and "coordinating" its investigation with the Sestak campaign. Weldon told CBS: "That is absolutely a partisan political activity on the part of the Justice Department if it occurred.”[12]

According to Berman, Weldon argued that Sestak spent much of his 30-year Navy career "drinking out of your wine goblets and being waited on by your sailor servants." Weldon also challenged Sestak's decision to have his 5-year-old daughter—who was diagnosed with brain cancer—treated in Washington, DC instead of Philadelphia, and "called the cops on an 18-year-old Eagle Scout and Sestak volunteer who was taking notes at a Weldon campaign event."[13]

In May 2001, Weldon organized a press conference in Washington (in conjunction with the SAFE Foundation) that was aimed at fending off arguments about the technical infeasibility of missile defense. At the conference, which was attended by five pro-missile defense scientists hired by a Boeing public relations consultant, Weldon said: "The testimony of these top-notch scientists should put to rest any hesitations that skeptics have tried to pin on our technological capability. … [T]oo often, we only hear from one side of the debate in the science community: the left side." Added Weldon, "Now the American people can hear the truth from men who actually know the scientific progress we have made. These scientific leaders can refute, chapter and verse, the Chicken Little views of the liberal scientific community.”[15]

Earlier, in 1997, Weldon was instrumental in establishing the purportedly bipartisan Commission to Assess the Ballistic Missile Threat to the United States, sometimes called the Rumsfeld Missile Commission after its chair, Donald Rumsfeld. The commission, which received funding in an amendment inserted by Weldon to the 1997 Defense Authorization Bill and was staffed by a number of hawkish foreign policy elites (including Woolsey, Paul Wolfowitz, and Stephen Cambone), was heavily criticized by observers for over-hyping the missile threat. The commission's final report, released in July 1998, contended that "rogue states" such as Iraq, North Korea, or Iran could deploy ballistic missiles within "five years of a decision to do so," contrary to the CIA's estimate that it would take at least 10-15 years (for more information, see the World Policy Institute’s Axis of Influence [16]).

Despite heated criticism of the findings, the report appears to have had some impact. As Tom Barry reported: "Although initially challenged by the director of central intelligence, a little more than a year later, in September 1999 the CIA released a new NIE that was substantially more alarmist than its previous one. It predicted that North Korea could test a ballistic missile capable of hitting the United States 'at any time' and that Iran could test such a weapon 'in the next few years.' Commenting on the new threat assessment, Rep. Curt Weldon, a main sponsor of the Rumsfeld Commission, congratulated himself: 'It was the largest turnaround ever in the history of the [intelligence] agency.' House Majority Leader Newt Gingrich (R-GA) was similarly ecstatic, saying the commission's conclusion was the 'most important warning about our national security system since the end of the Cold War.'"[17]

Despite his typically hawkish views on national security, Weldon sometimes struck an independent course in the House, sometimes in opposition to the Republican Party and the Bush administration. A Congressional Quarterly bulletin posted on the New York Times website reported that in 2006, "Weldon voted 76% of the time with his party on votes that divided the two parties: That is the 15th lowest score among House Republicans. Weldon's official 2005 'party unity' score was higher, at 85%, but still below the overall average score for House Republicans of 90%." [19]

On North Korea, in particular, Weldon often opposed the Bush administration's hard-line stance. In June 2003, after Weldon visited Pyongyang, he proposed a 10-point negotiation plan that would be initiated by a one-year nonaggression pact signed by Washington and Pyongyang.[20] And in June 2006, Weldon and the House Armed Services Committee pushed for "an amendment to the Defense Authorization Bill that would essentially launch a review (read: adult supervision) of Bush policy toward North Korea," according to John Feffer of Foreign Policy in Focus. [21]

In 2004, Weldon was one of six congressmen who attended a fundraising event at the Dirksen Senate Office Building in Washington at which the Rev. Sun Myung Moon, a convicted felon and owner of the right-wing Washington Times, crowned himself "savior, Messiah, Returning Lord, and True Parent." At the event, which was cosponsored by the Washington Times Foundation and the International Interreligious Federation for World Peace, Moon claimed that "Hitler and Stalin have found strength in my teachings, mended their ways, and been reborn as new persons." When news of the bizarre event made headlines, most of the congressional figures disavowed that they knew in advance the event was meant to be a coronation. Weldon's office initially denied reports that he attended the event but reversed itself after being shown photos. A Weldon spokesperson said that the congressman "had no idea that the Reverend Moon was going to be at this event. If we had known that Reverend Moon was going to attend the event, be crowned, and make an unbelievably interesting speech, the congressman likely would not have attended."[22]