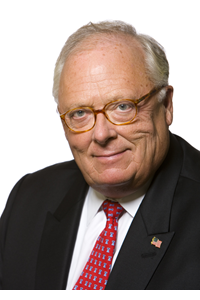 Edwin Fuelner is the cofounder and former president of the Heritage Foundation, a conservative think tank and advocacy group he cofounded with Paul Weyrich in 1973.

Fuelner served as Heritage’s president from 1977 until 2013, overseeing its emergence as the premiere right-wing think tank in Washington. “Under Feulner,” his Heritage bio proclaims, “Heritage grew from a nine-member staff on a shoestring budget working out of a rented office in 1977 to a 250-person, $80-million-a-year institution with a worldwide reputation for rigorous research and innovative policy recommendations, occupying three buildings near the U.S. Capitol.”[1] 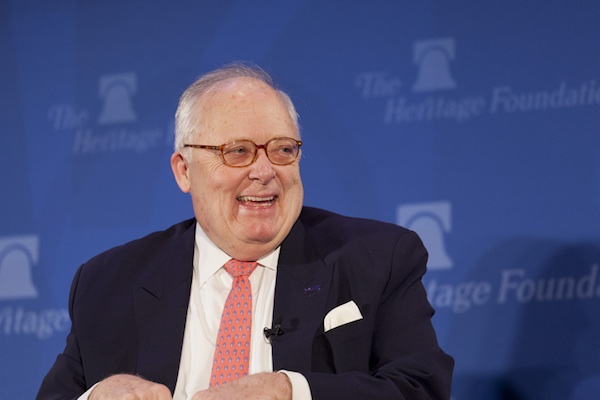 In his early years at Heritage, Feulner helped pioneer the practice, then rare for Washington think tanks, of producing concise “backgrounders” on complex issues and distributing them to members of Congress. He also helped oversee the production of a massive, 1,100-page policy handbook entitled Mandate for Leadership, which was widely credited as a blueprint for the conservative presidency of Ronald Reagan.[2] In recognition of his influence, Reagan awarded Feulner the Presidential Citizens Medal in 1989.[3]

Feulner has been repeatedly recognized as one of the most influential conservatives in the United States. Britain’s Daily Telegraph ranked him among the Top 100 American Conservatives in 2007 and 2010, and Karl Rove pegged him the sixth most important conservative in a 2009 Forbes article.[4] Although he has retired from Heritage, he continues to promote the Foundation’s work and issues in his column at the right-wing Washington Times.

Feulner is reliably conservative across a range of social and economic issues, and he is a steadfast hawk on defense issues. “The first and perhaps the most important thing for conservatives to get right is a wise foreign policy,” he wrote in 2014, the year after stepping down from Heritage. “Only after we ensure we have a sufficiently strong national defense can we turn to the important domestic issues that merit our attention.”[5]

Among Feulner’s priorities is a robust—or, according to critics, bloated—military budget. A “strong national defense,” he wrote, “means, for starters, making sure that we have sufficient troop levels to defend ourselves and our allies adequately. … We should be economical, but trying to defend ourselves on the cheap is no defense at all.”[6]

Feulner’s favored defense expenditures include a “modernized” nuclear arsenal and elaborate “missile defense” systems long favored by Cold War hawks of his generation. (Feulner once compared Ronald Reagan to Rosa Parks for his refusal to cancel the “Star Wars” Strategic Defense Initiative in an arms control agreement with the Soviet Union. “They couldn’t be more alike,” he wrote of Parks and Reagan, who had opposed civil rights legislation in the 1960s. “All the political power on earth couldn’t move Reagan to do the wrong thing. And all the indignity and intimidation of racism couldn’t keep Parks from doing the right thing.”)[7]

Hyping the work of the controversial EMP Commission, Feulner has insisted that a “global” missile defense network is necessary to protect the United States from an “electromagnetic pulse” attack[8]—a threat described by one critic as "a wild claim" peddled by a "crowd of cranks and threat inflators."[9]

He has also opposed nuclear disarmament and anti-proliferation treaties. “If the United States must maintain a ‘safe, secure and effective’ nuclear weapons arsenal to ensure the security of the nation and its allies,” Feulner wrote in 2013, “why did [President Obama] agree to a New START [arms control agreement] with Russia that calls for the U.S. to cut its number of nuclear weapons to 1,550 by 2018? Why stand behind the Comprehensive Test Ban Treaty, a pact that other nations flout with impunity while we honor it, and which allows our arsenal to atrophy through disuse?”[10]

Although the U.S. intelligence community has concluded since 2007 that Iran is not currently developing a nuclear weapon, Feulner accused the Obama administration of pursuing “pre-emptive disarmament” while Iran “continues to try to join the nuclear club.”[11] In 2009, he wrote that the United States “must prepare for military action” against Iran in the event that it refuses to halt its nuclear enrichment program, ensuring “that any strikes decisively set back Iran’s nuclear weapons capabilities.”[12]

Feulner was also a supporter of many of the Bush administration’s most controversial policies, including the 2002 invasion of Iraq, which—although the United States had toppled a secular dictator—Feulner described as “one theater of the greater war against Islamic terrorism.”[13]

Echoing the Bush administration’s rhetoric, Feulner wrote in 2004, “whether or not [Saddam Hussein] was formally allied with al-Qaida, there can be no doubt that Mr. Hussein was a staunch terrorist supporter. For example, he paid blood money to the families of Palestinian terrorists who had attacked Israeli targets. In this new world war, we can't afford to make distinctions between terrorist acts aimed at the United States and terrorist acts aimed at other democracies. As President Bush declared Sept. 20, 2001, ‘Either you are with us, or you are with the terrorists.’ That's the only way to fight this new war.” In a prediction that proved to be grievously wrong, Feulner concluded, “Soon, American troops will pull out of both [Iraq and Afghanistan], leaving freedom and democracy where before there was only tyranny.”[14] (Ten years later, Feulner would write of the war in Afghanistan, “Pulling out entirely by year’s end would be a huge mistake. We need a robust force there beyond 2014.”)[15]

Fuelner was also a supporter of the Bush administration’s use of torture to interrogate detainees. After Osama bin Laden’s death, he praised “the strategic and lawful interrogation of detainees” at Guantanamo Bay and further beat the drums for continued U.S. military action in the “war on terror.”[16]