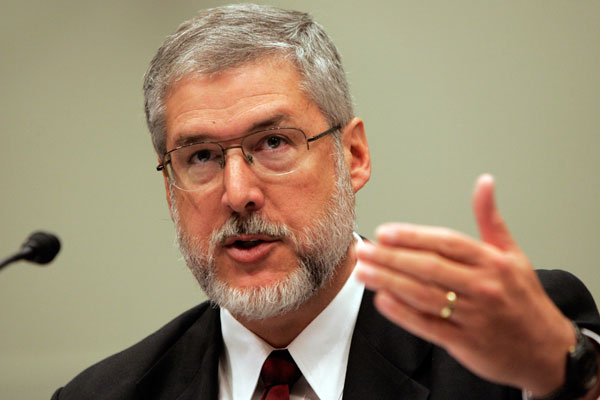 David Addington, a controversial former aide to Vice President Dick Cheney, is Senior Vice President, General Counsel, and Chief Legal Officer at the National Federation of Independent Business, a a business lobbying group.[1] Addington previously served as president for research at the conservative Heritage Foundation, a post he left in mid-2016.

Addington took up his post at Heritage shortly after leaving the government in 2009. According to some reports from the time, Addington was one of several Bush lawyers who had difficulty landing jobs after leaving the administration, which some observers attributed to the notoriety of their work while in government.[2] When Heritage announced in August 2010 its decision to hire Addington, then-Heritage president Edwin Feulner said, “Addington is a brilliant policy expert with over twenty years of senior experience at all levels and branches of governance. As a trusted advisor to two White Houses, the Defense Department,and four congressional committees, Mr. Addington understands Washington and how policy ideas become law.”[3] 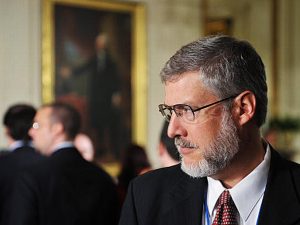 Addington’s controversial defense and national security work under Cheney has repeatedly been the focus of investigations and media reports. For instance, after the killing of Osama bin Laden in early 2011, Addington’s role as one of the authors of the infamous “torture memos” was widely discussed.[4]

After the leaking of NSA documents by contractor Edward Snowden in 2013, various reports were published highlighting Addington’s role in producing a secret legal memo authorizing NSA surveillance of U.S. citizens in the wake of the 9/11 attacks. The issue was covered in the PBS Frontline documentary “United States of Secrets,” which featured interviews with several former NSA analysts who left the agency after growing disillusioned with what they regarded as its launching of an unconstitutional and unnecessary domestic surveillance program.[5]

Commenting on Addington’s role, the documentary’s director, Michael Kirk, said that one of the “most astonishing” things they learned was that the legal memo authorizing the surveillance program “was written by the vice president’s attorney; not Alberto Gonzales, the president’s attorney, not over at the Justice Department, but by the attorney for the vice president. … Not an elected official—David Addington is the lawyer’s name. … He just went to an office and wrote something that is still a secret and kept it in his safe and once in a while would reveal it to some people to read.”[6]

In the VP’s Office

Widely viewed as having been one of the more influential figures within the office of the vice president (OVP) during the George W. Bush presidency, Addington was involved in several controversies. These included the decision to ignore Justice Department misgivings and approve memos authorizing torture techniques during interrogations of “war on terror” suspects; the effort to keep secret the Bush administration’s warrantless surveillance program; and the decision to block the release of key documents to the Senate Intelligence Committee regarding its investigation into prewar intelligence.

Referred to as “Cheney’s Cheney” or “Cheney’s hit man,” Addington became Cheney’s chief of staff after I. Lewis Libby was indicted in connection to the PlameGate affair.

Addington had been a loyal Cheney sidekick since the mid-1980s, when he served as counsel for the House Committee on Intelligence and the Committee on Foreign Affairs. After the election of George H.W. Bush, when Cheney moved from Congress to his post as Defense Secretary, Addington tagged along, serving as Cheney’s special assistant and later as his general counsel. And when Cheney became vice president to George W. Bush, Addington again became Cheney’s general counsel, a position he held until November 2005, when Cheney named him chief of staff.[7]

Commenting on his move to chief of staff, the New Republic‘s Ryan Lizza wrote: “Libby’s resignation may be a bigger boon to Democrats than they realize. Addington is both more extreme and more politically tone-deaf than his predecessor. He and Cheney are the harbingers of bad times for Bush. When their names are in the news, political peril seems to follow.”[8]

Until his employment in the vice president’s office, Addington’s public record had been rather thin—possibly one reason few commentators noted his emergence. The New Yorker‘s Jane Mayer wrote that Addington “is extremely private; he keeps the door of his office locked at all times, colleagues say, because of the national security documents in his files. He has left almost no public paper trail, and he does not speak to the press or allow photographs to be taken for news stories. (He declined repeated requests to be interviewed for this article.)”[9]

Shortly after joining the Bush administration, however, Addington’s name repeatedly surfaced because of his role in a string of controversial moves by the vice president’s office. In 2002, for example, John Wooden, owner of a parody-producing company called Chickenhead Productions, unveiled Whitehouse.org, a satirical website replete with photos and a fake bio of Lynne Cheney. Soon after the posting of the bio—which claimed that the second lady “likes movies, Infusium 23 Shampoo, postmodernist interpretative dance,”[10] Addington, then the VP’s general counsel, fired off a letter to Wooden demanding that he “delete the photographs of [Lynne Cheney] and the fictitious biographical statement about her from the website.”[11]

The letter’s unique accomplishment was to push droves of curious web surfers to Whitehouse.org. It also led reporters to query Cheney’s office about the VP’s role in the affair; the office denied Cheney had any knowledge of the letter. Some three years later, on October 31, 2005, when the White House (the real one) announced that Addington was going to replace Libby as Cheney’s chief of staff, Wooden was quick to react, posting on his company’s website a message to Addington: “Chickenhead would like to formally congratulate its best-ever pal, David Addington, on his recent promotion.”[12]

Commenting on the episode, the New Republic‘s Lizza wrote that although the “Chickenhead incident” was only a “minor dustup,” it was “emblematic of the larger role Cheney’s staff—and specifically Addington” played in the Bush White House. “On issue after issue, the Office of the Vice President overreacts and overreaches,” wrote Lizza, “pushing policies that end up embarrassing the administration and from which, more often than not, President Bush must retreat. But Cheney never seems to learn any lessons from these capers. If he had, he never would have promoted David Addington.”[13]

During his initial stint as Cheney’s chief counsel, Addington was one of several aides cited in connection with the ongoing investigation by Special Prosecutor Patrick Fitzgerald into the so-called PlameGate affair. Although not charged, Addington was mentioned in the indictment—by title only—as part of a group of officials in Cheney’s office who endeavored in early 2003 to identify Valerie Plame, and to gather and spread information about her husband Joseph Wilson’s trip to Niger.[14]

Addington was involved in numerous other controversies during his tenure as the vice president’s chief counsel, including the decision to block the release of key documents regarding the Senate investigation into pre-war intelligence.[15] He also helped draft the White House “torture memos, “which claimed that the president could sidestep the Geneva Conventions in the “war on terror,”[16] worked to block General Accounting Office efforts to investigate the executives and lobbyists who helped Cheney put together his energy plan,[17] and led efforts to impede Congress’s attempt to draft stringent rules governing the treatment of detainees in prisons like Abu Ghraib.[18]

As Cheney’s chief of staff, Addington was accused of pushing the vice president’s office to resist efforts by Bush administration lawyers to reverse the White House position on oversight of the National Security Agency’s warrantless surveillance program. When the administration announced in early January 2007 that it would allow court oversight of the program, one unnamed official told the Washington Post that Addington had “clearly lost this round.”[19]

The surveillance program, which the administration secretly instituted in 2002, sidestepped a 1978 law passed in response to the Watergate scandal. Meant to protect civil liberties and prevent abuses of executive power, the law requires that government efforts to eavesdrop on U.S. citizens be vetted by the Foreign Intelligence Surveillance Court. When former Secretary of State Colin Powell first heard about the administration’s surveillance program, which was revealed by the New York Times in late 2005, he reportedly said: “It’s Addington. He doesn’t care about the Constitution.”[20]

According to the New Yorker‘s Mayer, Addington was the architect of what is known as the “New Paradigm,” which she described as a “legal strategy for the war on terror” that rests “on a reading of the Constitution that few legal scholars share—namely, that the president, as commander-in-chief, has the authority to disregard virtually all previously known legal boundaries, if national security demands it. Under this framework, statutes prohibiting torture, secret detention, and warrantless surveillance have been set aside.” Describing Addington’s role in developing the paradigm, Mayer quoted a former administration lawyer who “said that the administration’s legal positions were, to a remarkable degree, ‘all Addington.’ Another lawyer, Richard L. Shiffrin, who until 2003 was the Pentagon’s deputy general counsel for intelligence, said that Addington was ‘an unopposable force.'”[21]

Republican activist Bruce Fein called the net effect of Addington’s influence on the president  “quite alarming.” Fein told Mayer that Addington and his cohorts “staked out powers that are a universe beyond any other administration. [Bush] made claims that are really quite alarming. He’s said that there are no restraints on his ability, as he sees it, to collect intelligence, to open mail, to commit torture, and to use electronic surveillance. If you used the president’s reasoning, you could shut down Congress for leaking too much. His war powers allow him to declare anyone an illegal combatant. All the world’s a battlefield—according to this view, he could kill someone in Lafayette Park if he wants! It’s got the sense of Louis XIV: ‘I am the State.'”[22]