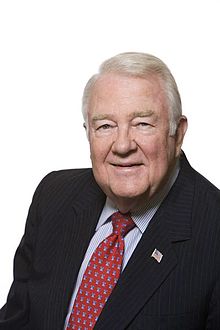 Former attorney general Edwin Meese, regarded as one of President Ronald Reagan’s closest advisers despite persistent allegations of influence peddling and bribery during his tenure, has been a consummate campaigner on behalf of rightist U.S. foreign and domestic policies. He currently serves as a fellow emeritus at the Heritage Foundation and distinguished visiting fellow at the  Hoover Institution.[1] He was a cofounder of the influential conservative legal group the Federalist Society and served as a member of the neoconservative-aligned Committee on the Present Danger, (CPD) a Cold War era group that re-emerged after 9/11 to push for an expansive “war on terror.”[2]

Meese has been an outspoken backer of Donald Trump. Although during the GOP primary Meese criticized Trump’s campaign for “dividing and and discouraging” Republican Party supporters, after Trump’s primary victory Meese joined  his transition team, joining some 200 other Reagan alumni and Republican figureheads like the Heritage Foundation’s Ed Feulner. Meese said in the run up to the election: “Many of us remember 1980, a time when, as today, America suffered from high unemployment and even higher interest rates, a military that needed to be strengthened and rebuilt, and diminished stature in the world of nations. Ronald Reagan turned that around. … We need a Trump-Pence administration to change the direction of our country. We all know that Hillary Clinton will continue Obama’s failed policies, growing the size, scope and cost of the federal government, and endangering our national security.” 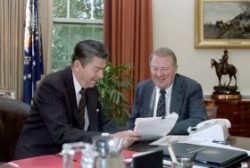 During the Barack Obama presidency, Meese was a frequent critic of the administration. Only a few months into Obama’s second year in the White House, Meese spearheaded an advocacy campaign aimed at warning the country that the existence of the United States was in jeopardy because of a dizzying array of purported threats, including unsecure borders, Shariah law, and unlawful combatants.

The coauthors and several other Republican Party figures subsequently launched an online advocacy campaign called “The Peace Through Strength Platform,” which was closely connected to the Center for Security Policy. The website claimed that in a world “characterized by growing threats to freedom and the U.S. Constitution, America’s exceptional role, and indeed our country’s very existence, is at risk.”[4]

To address these “risks,” campaign supporters reiterated the 10-point platform initially laid out by Meese and his coauthors in the Washington Times: 1) Renewed adherence to the national security philosophy of President Ronald Reagan: “Peace Through Strength”; 2) A robust defense posture including a safe, reliable effective nuclear deterrent; 3) Preservation of U.S. sovereignty against international treaties; 4) A nation free of Shariah law; 5) Protection from unlawful enemy combatants; 6) Energy security; 7) Borders secure against penetration by terrorists, narco-traffickers or others seeking to enter the United States illegally; 8) High standards that protect the military culture essential to the All-Volunteer Force; 9) A foreign policy that supports our allies and opposes our adversaries; 10) Judicial and educational institutions that uphold the constitutional responsibility of elected officials to make policy for our military and convey to future generations accurate portrayals of American history, including the necessity of defending freedom.[5]

Meese got his start working on the staff of then-Governor Ronald Reagan in California during the 1960s and 1970s. After Reagan was elected president, Meese was tapped to serve initially as the counsellor to the president and on the National Security Council. When Reagan was re-elected, Meese became attorney general. Meese stepped down as attorney general before the end of Reagan’s second term as numerous legal scandals erupted regarding alleged political and financial irregularities.

A principal tactic employed by Meese in his efforts to push through hardline public policies was to stack the judiciary with like-minded ideologues. As part of these efforts, Meese and several friends and colleagues—Including Robert Bork and future Supreme Court Justice William Rehnquist—helped establish the Federalist Society in 1982, which today is regarded as one of the most influential non-governmental groups in the United States. [7]

Reports Salon, “Meese, Rehnquist and their allies … wanted their counterrevolution to prevail over the long haul: not just from the top down but at the legal grass roots. They wanted the future, not just the present, and that meant focusing on law schools. … So in 1982, Meese, Rehnquist and other first-generation legal conservatives reached out to law students and encouraged the founding of a new organization: the Federalist Society. Funded generously by Richard Mellon Scaife and patrons, the Federalist Society became a national networking organization that nurtured young conservatives and swiftly became a crucial channel to Supreme Court clerkships and prestigious jobs in the Reagan administration. In ‘Closed Chambers,’ former clerk Lazarus outlines how Federalist Society clerks formed a self-described ‘cabal against the libs’ to push justices in a rightward direction. Conservative donors like Scaife were encouraged to endow professorships and to fund conferences and training institutes to tutor judges in corporate deregulation and other articles of conservative legal faith.”[8]

During his tunure as attorney general, Meese was dogged by a number of allegations of bribery and influence peddling. In one case, an independent prosecutor was appointed to investigate alleged financial improprieties by Meese while he was attorney general. As part of the investigation, the prosecutor looked into Meese’s involvement in a Bechtel pipeline deal in Iraq. One of the dealmakers for the pipeline project was Donald Rumsfeld. According to the New York Times, “[Bechtel] has a long history of doing business in Iraq, including an unsuccessful pipeline deal that at one point involved a meeting between Donald H. Rumsfeld, now the secretary of defense, and Saddam Hussein. That project later drew scrutiny from a special prosecutor looking into allegations of impropriety involving Edwin A. Meese III, the former White House counsel and attorney general in the Reagan administration.” Meese’s involvement in the Bechtel deal revolved around his relationship with E. Robert Wallach, a lawyer close to the attorney general who was hired by Bechtel to help negotiate with the Israeli government. Although he was not prosecuted, Meese ultimately resigned.[9]

An online reference source, American Decades, describes Meese’s record thusly, “No other member of the Reagan administration, with the exception of Oliver North, was as tainted by scandal as Edwin Meese III. Certainly, no other Reagan official was more disliked, both within the administration and on Capitol Hill, though Reagan himself called Meese his ‘alter ego.’ At one point in his tenure as attorney general Meese was under investigation by three special prosecutors, each inquiring into separate allegations of influence peddling, bribery, and cover-up in the Iran-Contra affair. Though Meese was never charged with any crime, the last of the special investigators said that Meese ‘had probably broken conflict of interest and income-tax laws, though none of the indictments were worthy of prosecution.’ This statement provoked outrage and derision among congressional staffers who had helped to build cases against Meese, for its logic supposed that the nation’s chief law enforcement officer was to be held to a lower standard of conduct than ordinary citizens. Though Meese had figured in virtually every imbroglio of the Reagan administration, like the president himself he was able to shed charges of personal culpability. Nevertheless, the ‘sleaze factor’ emerging from the Reagan presidency jeopardized, but did not undermine, the election campaign of Vice President George Bush in 1988, which feared the political capital to be gained by Democratic candidate Michael Dukakis.”