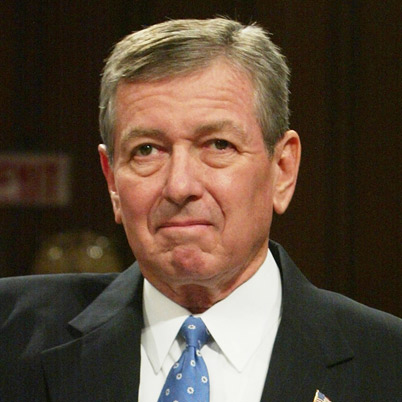 John Ashcroft is a longstanding Republican Party figurehead who served as the U.S. attorney general during the first term of President George W. Bush. He heads the Ashcroft Group consulting firm, sits on the board of directors for the military contractor Academi (formerly Blackwater), has been a member of the Federalist Society, and is a distinguished professor at the Regent University School of Law, a conservative Christian institution affiliated with evangelist Pat Robertson. 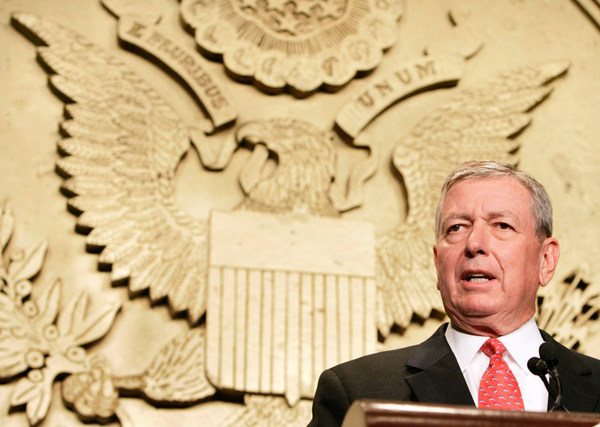 A former governor and senator from the state of Missouri, Ashcroft is closely associated with social conservatism, having opposed abortion, gay rights, gun control, and hate crimes legislation. He famously issued an order as attorney general to cover the breasts of the “Spirit of Justice” statue at the Department of Justice building.[1]

After the 9/11 attacks, Ashcroft became closely associated with many of the Bush administration’s more controversial counterterrorism policies. According to a Washington Post summary, Ashcroft “championed a broad expansion of government power to investigate possible terrorist cells through the USA Patriot Act, authorized the detention of hundreds without charges in the days after Sept. 11, pushed immigration agents to fully use their power to deport foreigners, secured new authority to peer into private records even in libraries, and oversaw legal interpretations that opened the door to harsh interrogation techniques that critics called torture.”[2]

Ashcroft’s role in crafting these controversial policies led to several lawsuits, including one high-profile case filed by a Muslim American man who was detained, strip-searched, and shackled without charge or suspicion of terrorism.[3] In another case, a civil liberties group called the Velvet Revolution filed an ethics complaint against Ashcroft and several other Bush administration officials—including, among others, Alberto R. Gonzales, Michael B. Mukasey, Michael Chertoff, Douglas J. Feith, and David Addington—calling for the officials to be disbarred for “writing or approving legal opinions” that justified torture.[4]

Ashcroft accused his critics of aiding terrorists. “To those who scare peace-loving people with phantoms of lost liberty,” Ashcroft told a Senate committee in December 2001, “my message is this: Your tactics only aid terrorists—for they erode our national unity and diminish our resolve. They give ammunition to America's enemies, and pause to America's friends. They encourage people of good will to remain silent in the face of evil.'” Ashcroft’s remark prompted widespread criticism, with the Washington Post dubbing the allegation that critics of the “war on terror” help the terrorists the “Ashcroft smear.”[5]

On some occasions, Ashcroft challenged hardline measures favored by other members of the Bush administration. "In addition to rejecting the most expansive version of the warrantless eavesdropping program," the Post summary noted, "Ashcroft also opposed holding detainees indefinitely at the U.S. military base at Guantanamo Bay, Cuba, without some form of due process” and “fought to guarantee some rights for those to be tried by newly created military commissions.” Ashcroft also advocated civilian trials for some terrorist suspects, including Zacarias Moussaoui, who was accused of conspiring with the 9/11 hijackers. “These internal disputes,” added the Post, “often put Ashcroft at odds with Vice President [Dick] Cheney and then-Defense Secretary Donald H. Rumsfeld."[6]

In a particularly infamous 2004 incident that occurred while Ashcroft was in the hospital recovering from pancreatitis, Bush administration aides—including future Attorney General Alberto Gonzales—visited Ashcroft and attempted to get his approval for an extension of a warrantless surveillance program. Ashcroft refused, leading to a heated confrontation, the eventual suspension of the program, and nearly to the resignation of the Justice Department’s senior leadership.[7] Subsequent reports suggested that the program may have concerned the warrantless collection of Internet “metadata,” a program that was later revived under the Obama administration.[8]

Nevertheless, Ashcroft remains an advocate of an expansive role for government intelligence services, even following revelations by NSA whistleblower Edward Snowden about the extent of government abuses in vacuuming up citizens’ data. “We can ill afford to shrink intelligence in the face of a world which I think is more demanding of intelligence,” he said at the 2013 Aspen Security Forum. “Information is the best friend of prevention. … We need increased intelligence, not decreased intelligence.”[9]

Ashcroft has also advocated a “blended” approach to counterterrorism that incorporates law enforcement as well as the armed forces, asserting that “we’re still at war” and “I don't think we should shrink from using [our military].” In particular, Ashcroft implied that the wars in Afghanistan and Iraq were both part of the “general war on terror,” despite the fact that Iraq’s prewar connection to al-Qaeda has long been discredited. Ashcroft also expressed support for the White House’s controversial targeted assassination program, including in locales where the United States is not officially at war, such as Pakistan, Yemen, and Somalia. “The president's always been able to defend the U.S. on his own authority,” Ashcroft said. “If you wanna smoke somebody, despite the fact that we're not at war with them, you can still eliminate them.”[10]

Since leaving office, Ashcroft has joined a number of commercial enterprises.

In 2005, shortly after his tenure as attorney general ended, he founded the Ashcroft Group consulting firm, which according to the Associated Press advises "clients on homeland security, law enforcement, and other issues involving business and government" and provides "strategic consulting, crisis counseling, and security and internal investigative services to corporations and other organizations.”[11]

Ashcroft’s venture attracted criticism from good government groups wary of the "revolving door" between government and industry. “Some critics find his move from the nation's chief law enforcement officer to K Street, the heart of the lobbying world, to be as undignified as it is unusual,” the New York Times reported in 2006. “Danielle Brian, executive director of the Project on Government Oversight, said that because Mr. Ashcroft had worked only in government, 'he cannot claim to have any business expertise. What is he selling,' Ms. Brian asked, 'other than connections and knowledge of how to game the system from being attorney general?'” One client in particular, the consumer data firm ChoicePoint, “received millions of dollars in contracts from the Justice Department under Mr. Ashcroft as part of the war on terror and has now hired him to find more."[12]

According to The Hill, one of Ashcroft Group's first clients was the Israeli government.[13] Other clients have included Israel Aircraft Industries International, LTU Technologies, Inc., and the tech company Oracle, which successfully dodged an antitrust suit originally filed under Ashcroft after hiring his firm.[14] Ashcroft’s firm also received over $50 million in contracts from then-U.S. Attorney—and later New Jersey Governor—Chris Christie, who was later investigated for awarding the contract, one of the largest of its kind, to his former boss.[15]

In 2011, Ashcroft became an “independent director” on the board of Xe Services (now Academi), the controversial security firm formerly known as Blackwater, which has faced scores of charges related to weapons trafficking, unlawful force, and corruption.[16] Ashcroft "is a very known quantity to the federal officials that Xe will pitch," reported Wired. "Even if he’s not lobbying for Blackwater, Ashcroft’s addition on the board is meant to inspire confidence in government officials of its newfound rectitude."[17]