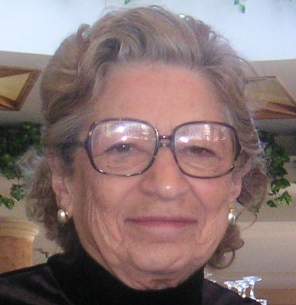 Midge Decter is a controversial writer and activist who has long been associated with neoconservatism. She is the spouse of neoconservative trailbrazer Norman Podhoretz, the mother of Commentary editor John Podhoretz and the late writer Rachel Abrams, and the mother-in-law of Elliott Abrams. Alongside her hawkish foreign policy activism, Decter is also the author of many controversial broadsides against feminism, homosexuality, and “liberal” parenting.

Decter has been affiliated with a host of advocacy groups over the years. She has sat on the boards of the Heritage Foundation, the Center for Security Policy, and the Hoover Institution; was a founding member of the Project for the New American Century and a frequent signatory to its letters; and worked for decades as an editor at the rightist publishing imprints Basic Books and Legacy Books. In the 1980s, she worked with Donald Rumsfeld—about whom she later wrote a fawning biography—to launch the Committee for the Free World, a hardline anticommunist group that built on earlier work by the Coalition for a Democratic Majority and the Committee on the Present Dangerin the 1970s.[1] 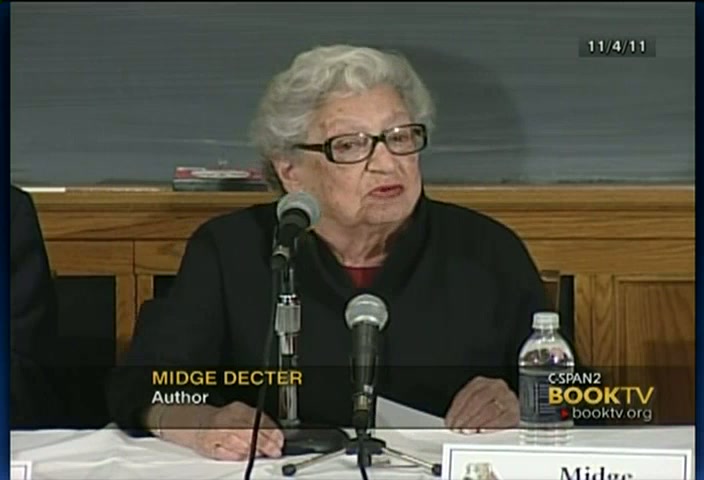 Decter is currently an editorial board member of the “theoconservative” magazine First Things and a member of the reincarnated Committee on the Present Danger, which was revived after the 9/11 attacks to promote an aggressive “war on terrorism.”

After a middle-class upbringing in Minnesota and an unsuccessful attempt at college, Midge Rosenthal moved to New York and took a job as a secretary at Commentary, a flagship publication of the emerging neoconservative movement. There she met Norman Podhoretz, who became her second husband after the end of her first marriage to Moshe Decter. In the 1960s, she worked as an editor at Commentary and later at Harper's.[2]

Like many first-generation neoconservatives, Decter began her political career as a Democrat, moving to the right when she became disillusioned with the antiwar rhetoric of the George McGovern campaign. Her antipathy for the antiwar movement led her to help found the Coalition for a Democratic Majority, a group of hawkish Democrats associated with Senator Henry "Scoop" Jackson that was explicitly modeled on the earlier CIA-funded Congress for Cultural Freedom.[3] She also joined the Committee on the Present Danger, a hardline advocacy group that opposed détente with the Soviet Union.

Despite her frontline neoconservative activism, Decter was better known in the 1970s as a cultural provocateur who railed against the social politics of the emerging New Left. Although her status as a Manhattan divorcee with a successful journalism career might have made her an unlikely critic of feminism, she emerged as a particularly harsh critic of the women's liberation movement. As a write-up in the Jewish Women’s Archive put it, Decter’s first two books—The Liberated Woman & Other Americans (1970) and The New Chastity and Other Arguments Against Women's Liberation (1972) —“advanced the thesis that radical women who claimed they wanted freedom from male oppression were, in fact, afraid of growing up, having children, and taking on responsibility.”[4] In one particularly notorious passage, Decter argued that "the pursuit of orgasm for a woman is an entirely irrelevant undertaking."[5]

Decter also attacked an increasingly visible gay culture in a homophobic 1980 essay for Commentary entitled “The Boys on the Beach.” The piece was fiercely criticized by the novelist and cultural critic Gore Vidal in his essay “Some Jews and the Gays,” which examined homophobia among middle-class Jews in the United States. According to the New York Observer, Decter’s essay—which characterized homosexuality as socially deviant and personally destructive—“clearly provoked in Mr. Vidal a kind of gleeful, murderous fury. He alternates light slaps (‘She … writes with the authority and easy confidence of someone who knows that she is very well known indeed to those few who know her’) with roundhouse punches (‘For sheer vim and vigor, “The Boys on the Beach” outdoes its implicit model, The Protocols of the Elders of Zion’), and ends on a note of bitter contempt and ominous foreboding: ‘[S]he is indeed a virtuoso of hate, and thus do pogroms begin.’"[6]

Pivoting back to foreign policy in 1981, Decter founded the Committee for the Free World, which pushed for an aggressive Cold War stance until it disbanded in 1990. It was particularly active in backing right-wing paramilitary movements in Latin America.  Decter served as executive director of the group while Donald Rumsfeld served as its chair. Other figures associated with the committee included Elliott Abrams, Michael Ledeen, Richard Perle, Paul Wolfowitz, and Jeanne Kirkpatrick. Decter also led the short-lived Nicaraguan Freedom Fund during this time.

Decter has also been active in the putatively interreligious but mostly Christian “theocon” community, which weaves “exceptionalist” U.S. foreign policy views with conservative social and religious values. She is a former senior fellow at the Institute on Religion and Public Life, a theoconservative institute founded by the late Richard John Neuhaus, and has served since the 1990s on the editorial board of its publication, First Things.[7] Following the departure of First Things executive editor David Mills in March 2014, Decter was named interim executive editor until a replacement could be found.[8]

“War on Terror” and Beyond

In 2004, Decter joined a group of high profile political figures—including Sen. Joe Lieberman (D-CT), Sen. Jon Kyl (R-AZ), and former CIA director James Woolsey—in resurrecting the Committee on the Present Danger (CPD). In its post-9/11 incarnation, the CPD claims to be "dedicated to protecting and expanding democracy by supporting policies aimed at winning the global war against terrorism and the movements and ideologies that drive it." Decter was blurbed on the CPD website as saying: "The United States is the leading—indeed at the moment the only—major world power. It continues, as it always has done, to play this role reluctantly. Thus each international crisis is made to seem an entirely new and separate—and surprising—issue to deal with. Yet whether we take up the burden of our power willingly or reluctantly, it will remain our inescapable burden still. If we fail to act, that too will be an action. It is time for Americans to understand this and to be grateful that it is they, and not some monstrous regime, who have been chosen by Providence to play this role."[9]

Decter’s most high-profile publication in recent years is a fawning 2003 biography of Donald Rumsfeld, which was widely ridiculed for its preoccupation with Rumsfeld’s “manliness.” “Decter concludes that Rumsfeld’s secret is 'manliness' (italics hers), a quality that in her estimation has something to do with being a grandfather and something to do with prairies,” wrote Larissa MacFarquhar in a review for the New Yorker. “But, unfortunately for the reputation of her subject, the tone of the book is anything but manly. She blows him warm kisses (‘He works standing up at a tall writing table, as if energy, or perhaps determination, might begin to leak away from too much sitting down’), and warmer ones (‘this was the stuff—no other word would do—of glamour’), and even warmer ones (‘Oh, Rumsfeld,’ a friend coos, ‘I just love the man!’), until poor Rumsfeld begins to melt. … Everyone knows how to damn with faint praise, but damning with extravagant praise is a more esoteric enterprise, the more so because it is frequently unintentional.”[10]

The book was also notable for its strident defense of Rumsfeld’s rule at the Pentagon and his advocacy for the Iraq War. "In retrospect,” wrote Jonathan Chait in a 2006 New Republic commentary, “the quasi-salacious hero worship stands out less than Decter's wholehearted endorsement of Rumsfeld's hallucinatory worldview. In Decter's telling, Rumsfeld had the brilliant foresight to transform the military into a lighter, smaller force. ('[W]ho could honestly doubt the brilliance of the military plan [in Iraq]?' she asked, in what was at the time intended to be a rhetorical question.) Alas, as she explained, his masterful strategy aroused the envy of lesser minds around him. As she put it, '[t]hose whose resistance he had successfully put down would set out to exact their revenge by attacking his plan for the conduct of the approaching war in Iraq.' For instance, she noted incredulously, 'Ralph Peters complained that there were still not enough troops in Iraq to do what was necessary. They might have won the war handily … but now there were not enough boots on the ground to establish the rule of law.' Decter presented this objection as self-evidently wrong."[11]

As the Iraq War took a turn for the worse, however, Decter pinned responsibility on the U.S. antiwar movement rather than on Rumsfeld and the war’s other architects. In 2011, for example, she wrote, “Those who to this day claim not to have been convinced about the justice of that war are merely dancing to the music of a culture grown tired of feeling the often very complex rhythms of responsibility. So they continue to dispute established facts and look instead for simpler, more self-assured entertainment.”[12] This view was similar to her analysis of Vietnam. In a 2005 lecture at the Heritage Foundation, she restated her claim that "Johnson and Nixon were unable to turn Vietnam into an honorable and ultimately beneficial military undertaking … not because of what was happening in Vietnam itself but because of the hostilities back here in the United States."[13]

After the publication of Rumsfeld’s own memoir in 2011, Decter praised his continued defense of the Iraq War and other controversies from the Bush administration. “If we ever come as a nation truly to understand what we have done as well as what we must continue to do about Iraq and Afghanistan—and who at this particular moment can say where else?—our debt to [Rumsfeld] will be immeasurable,” she wrote.[15]

[9] Committee on the Present Danger, "Our Members: Midge Decter," http://www.committeeonthepresentdanger.org/index.php?option=com_cpdteam&id=1639&Itemid=89.