TheNational Interest is a U.S. foreign policy magazine. Founded in 1985 by Irving Kristol, the trailblazing neoconservative writer, the magazine has historically showcased both neoconservative and realist viewpoints on U.S. foreign policy, often fostering debates between the two perspectives. Although the magazine continues to publish authors from neoconservative, realist, and sometimes liberal or libertarian backgrounds, it has identified with a solidly realist editorial bent since its 2001 takeover by the Nixon Center, which rebranded itself in 2011 as the Center for the National Interest.

“Since its founding by the neoconservative thinker Irving Kristol,” summarized David Kirkpatrick in the New York Times, “TheNational Interest has been a central forum for the most influential conservative foreign policy thinkers of all stripes to hash out their differences. It launched ideas that entered the public policy vernacular, like ‘the end of history,’ ‘the West and the rest,’ and ‘geo-economics.’”[1] 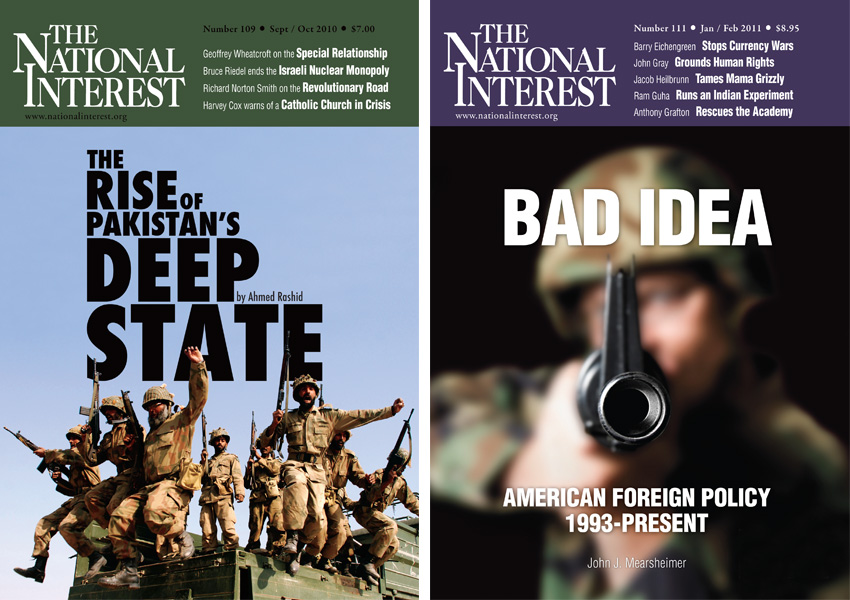 A major theme in the National Interest's commentaries of recent years has been the alleged decline of U.S. power since the Iraq War and the global financial crisis, both of which eroded popular support in the United States for foreign interventions. "In a democracy, no president can sustain a costly and ambitious foreign policy without public support," wrote contributing editor Ian Bremmer in April 2014. “In America today, that support just isn’t there." Bremmer wrote that the erosion of popular support at home and damaged U.S. relationships with allies—especially "second-tier" allies like Brazil, Turkey, and Germany—made the success of U.S. foreign policy more contingent on the whims of regional powers elsewhere. He added that the United States had contributed to its own weakness by alienating its allies with its controversial foreign and security policies. "The wars in Iraq and Afghanistan, Guantanamo, and drone strikes inside other countries have made it harder for foreign leaders to persuade voters they should still support U.S. policy," he wrote. "The U.S. National Security Agency has made matters worse."[2]

With growing support in the Republican Party for a more modest foreign policy of a kind championed by libertarian Sen. Rand Paul (R-KY) and other Republican critics of the neoconservative movement, the National Interest began focusing on efforts by hawkish commentators like William Kristol, Jennifer Rubin, and Bret Stephens to tarnish the Kentucky senator as an out-of-touch fringe figure. Although few of the magazine’s writers endorsed Paul outright, most held out hope that he might steer the GOP back toward a more realist foreign policy. "While it's too much to dub [Paul] an isolationist—the boo word of American foreign-policy debates—he clearly is enunciating stands that are at variance with the Bush-Cheney legacy," wrote National Interest editor Jacob Heilbrunn. Heilbrunn likened Paul's critics to Cold War-era neoconservatives who "were all full of talk of confrontation and readiness to resort to nuclear war," and who "embraced the rollback doctine, which never really ended up rolling back anything." Heilbrunn held out that Paul "could seek to revive a different tradition, the realist one exemplified by Dwight D. Eisenhower, Richard Nixon and George H.W. Bush."[3] Pointing to public opposition to U.S. intervention in Ukraine and Syria—two high-profile issues where neoconservatives battered Paul for his anti-interventionist stance—another contributor added, "The claim that Paul is so wildly out of the mainstream is more often asserted than proved."[4]

Francis Fukuyama, an erstwhile supporter of the neocons and a longtime National Interest advisory board member, spurred a bruising debate at the magazine when he published a harsh critique of neoconservative support for the Iraq War in 2004. He reserved special criticism for Washington Post columnist Charles Krauthammer, a noted neoconservative and a fellow advisory board member, whose ideas Fukuyama argued had become "strangely disconnected from reality." After Krauthammer published a critique of Fukuyama's article in a following issue of the magazine, a long debate ensued in the letters section of the magazine about neoconservatism and the role of U.S. power.

Around the same time, the National Interest featured a commentary by Robert Ellsworth and Dimitri K. Simes—"Realism's Shining Morality"—that amounted to an indictment of neoconservatism and a call for a more realist foreign policy: "The second Bush administration will have to deal with two fundamental dilemmas,” the authors wrote: “first, how to reconcile the war against terror with a commitment to make the world safe for democracy; and second, how to assure that unchallenged U.S. military supremacy is used to enhance America's ability to shape the world rather than provoke global opposition to the United States, making us more isolated and accordingly less secure."[5]

The debate eventually led to the departure of 10 of the magazine’s 14 advisory board members—including such notable hawks as Midge Decter and Samuel P. Huntington—who complained about the increasingly realist bent of the publication under the Nixon Center. Oddly enough, the defectors were led by Fukuyama, who wrote in a letter signed by all 10 departing members, “What we liked about the old National Interest was the variety of viewpoints that it published. We do not have confidence that this kind of editorial policy can long be retained by a magazine with a mandate to represent the interests of the Nixon Center." Despite his own recent broadside against the neoconservatives, Fukuyama told the New York Times, "In the wake of Iraq, I think there is going to be this fight over what a certain conservative foreign policy is, and I personally don't want to see the realists walking about with a lot of moral authority at this point."[6]

Along with former National Interest advisers Zbigniew Brzezinski, Eliot Cohen, and Josef Joffe, Fukuyama subsequently launched the American Interest to compete with his former journal. Washington Post columnist Dana Milbank described the spat as “a classic Washington brawl about ego and influence” that nonetheless exposed a growing rift between the Republican Party’s realist and neoconservative factions in the Bush administration. “President Ronald Reagan kept a relative truce between the two factions, as did Irving Kristol's National Interest among intellectuals,” Milbank wrote.  “But during this presidency, both cease-fires have ended.”[7]

Although the National Interest’s editorial bent is avowedly realist, the magazine continues to publish a variety of perspectives on foreign policy. Its leadership, while Republican-leaning, contains hints of ideological diversity as well. Its publisher and CEO is Dimitri K. Simes, a former Nixon adviser who was appointed by the former president to head the Nixon Center when it was founded in 1994. Its advisory board, which was headed by former Secretary of Defense and CIA director James R. Schlesinger until his death in 2014, includes a few notable foreign policy hawks—including Conrad Black, Zalmay Khalilzad, Ruth Wedgwood, and Dov Zakheim—as well as Republican internationalists like Brent Snowcroft and Leslie Gelb. But it also includes liberal internationalist Gary Hart and noted “Israel lobby” critic John Mearsheimer, along with Russian scholar Alexey Pushkov, Moroccan publisher Ahmed Charai, and a handful of others. Henry Kissinger, a hard-nosed realist responsible for many of the Nixon administration’s most controversial foreign policies, is the magazine’s honorary chairman.[8]

According to its website, the Center for the National Interest is “supported by foundation, corporate, and individual donors as well as by an endowment.”[9] It reported a little over $1 million in receipts in 2012, compared to over $8.7 million in 2011 and $1.6 million in 2010.[10]

[9] Center for the National Interest, “About,” http://www.cftni.org/indexcc42.html?action=showpage&page=about.

[10] Guidestar.org, “Nonprofit Report for the Center for the National Interest,” http://www.guidestar.org/organizations/26-2117013/center-national-interest.aspx.