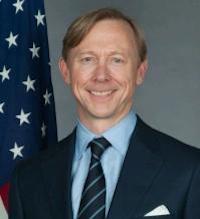 Brian Hook is the director of policy planning and senior policy advisor to the Secretary of State, Mike Pompeo. He held several senior positions in the George W. Bush administration, including assistant secretary of state for international organizations and senior advisor to the U.S. ambassador to the United Nations.[1] 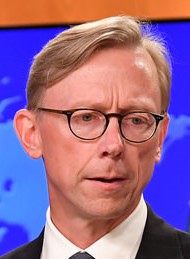 Hook was named director of policy planning by Trump’s first secretary of state, Rex Tillerson. The hiring was surprising because Hook had previously expressed fierce opposition to Trump. Politico described him in 2016 as “one of a small, die-hard set of the Republicans who have been wandering outside this season, getting wet, locked out of their own house.”

“Even if you say you support him as the nominee,” Hook said of candidate Trump, “you go down the list of his positions and you see you disagree on every one.”[3]

Hook is the co-founder of the John Hay Initiative, a group of former Mitt Romneyforeign-policy advisors who organized a prominent open letter signed by 121 GOP national security luminaries refusing to support Trump’s candidacy because he would “act in ways that make America less safe.” Hook was not among the signatories.[4]

During his time under Tillerson, Hook developed close relationships with Trump inner circle members Jared Kushner and Stephen Miller. This, along with a very strong reputation in right wing foreign policy circles, seemed to be the key factors in his survival.[5]

Soon after Hook was named Director of Policy Planning, he “purged” career State Department officials perceived as insufficiently loyal to Trump. Hook took action after former House Speaker Newt Gingrichsent him an article from an obscure right-wing publication that was critical of an Iranian-American State official named Sahar Nowrouzzadeh. She became one of the “Obama holdovers” pressured out of key positions at State.

Hook initially called the reports “ludicrous,” but as journalist Nahal Toosi reported in Politico, leaked emails “show that State Department and White House officials repeatedly shared … misleading information about Nowrouzzadeh, deriding her as an Obama cheerleader and strong advocate for the nuclear deal with Iran, which Trump had repeatedly denounced.”[6]

After the critical stories of her came out, Nowrouzzadeh reportedly approached Hook to reassure him of her professionalism. The leaked the emails, however, revealed that Hook remained suspicious of her. He transferred her out of the policy planning office. Efforts by congressional representatives to investigate the affair were ignored by the White House.[7]

In August 2018, Secretary of State Mike Pompeo named Hook as the head of the Trump administration’s newly created Iran Action Group. Al Jazeerareported, “Hook said Iran’s ‘malign activities’ were ‘wide-ranging’ and Washington’s new strategy was addressing all manifestations of ‘the Iranian threat.’ … The new Iran Action Group will be focused on implementing that strategy.”[8]

Hook quickly demonstrated his hawkish approach. Less than a week after his appointment, he responded to a relatively small $21 million aid package the European Union had granted Iran by saying, “Foreign aid from European taxpayers perpetuates the [Iranian] regime’s ability to neglect the needs of its people and stifles meaningful policy changes. More money in the hands of the Ayatollah means more money to conduct assassinations in those very European countries.”[9]