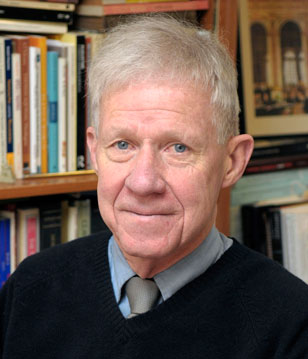 Charles Hill is a retired Foreign Service officer, a lecturer at Yale, and a research fellow at the conservative Hoover Institution.

Hill’s diplomatic career included stints as an aide to UN Secretary General Boutros Boutros-Ghali, adviser to U.S. Secretary of State George Schultz, and speechwriter for Henry Kissinger. His lengthy Foreign Service resume includes stints in Israel, Switzerland, Taiwan, and Hong Kong.[1] According to the American Conservative, Hill’s Foreign Service career was ultimately ended “after it became clear that he had concealed evidence of Schultz’s extensive knowledge of the Iran-Contra scandal from federal agents.”[2] 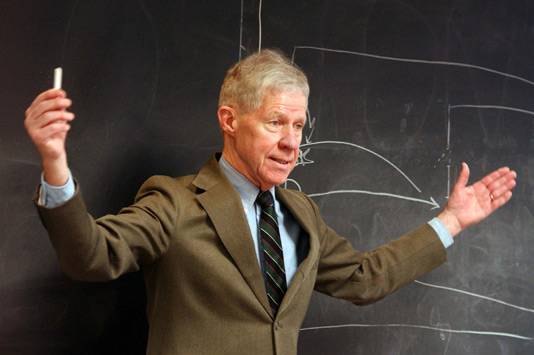 Hill became a lecturer at Yale following his exit from the Foreign Service, where he founded, with fellow academics John Gaddis and Paul Kennedy, the Grand Strategies network, a national association of academic programs that appears to encourage hawkish views among students of prestigious universities. “Ostensibly created to train an up-and-coming elite to see a global ‘big picture,’ wrote historian Allen Ruff in 2011, “this grand strategy network has brought together numbers of ‘liberal hawk’ and conservative foreign policy wonks heavily invested, literally and figuratively, in an unending quest to maintain US global supremacy, a campaign which they increasingly refer to as the Long War. The network marks the ascent and influence of the Long War University.”[3]

A recurring theme in Hill’s work is what he regards as the central role of the United States in preserving—by coercion if necessary—the international state system. In a 2012 interview with the Wall Street Journal, for example, Hill praised President George W. Bush for issuing an “emancipation proclamation for the world,” but condemned the Obama administration for somehow “turning backward” the “democracy wave that began 20 years ago” at the end of the Cold War. “The whole system has been defended by the leadership of the U.S. and its allies,” Hill said. “And the idea of open expression and open trade is the American way of seeing the world improve itself in the future. If America is not gonna do that, nobody else is gonna do it. And that's what's happening now.”[4]

Hill reiterated his critique in comments quoted by the conservative New York Times columnist David Brooks in 2014. “When an established international system enters its phase of deterioration,” Hill said, the “wolves of the world … will begin to make their moves to probe the ambiguities of the aging system and pick off choice pieces to devour at their leisure. This is what [Russian President Vladimir] Putin is doing; this is what China has been moving toward doing in the maritime waters of Asia; this is what in the largest sense the upheavals of the Middle East are all about.” He concluded, “The old order once known as ‘the American Century,’ has been situated within ‘the modern era,’ an era which appears to be stalling out after some 300-plus years. The replacement era will not be modern and will not be a nice one.”[5]

Hill was particularly critical of the Obama administration’s reluctance to intervene in Syria’s civil war, arguing that the White House had effectively handed control of the international system over to Russia, Iran, and China. In a 2013 article for the Hoover Institution, Hill posed as a Russian diplomat transmitting a message to Moscow from the Russian embassy in Tehran (which Hill sarcastically quipped had been leaked by “special assistant to President Putin” Edward Snowden). He wrote: “Of course we are delighted with this American abdication of its leadership.” Because the United States had failed to intervene to uphold “a fundamental principle of the international state system”—in this case, an international ban on the use of chemical weapons—Hill concluded, “We stand at the dawn of an entirely new era, the end of the so-called ‘Modern’ and the birth of a ‘troika’ of power—Russia, Iran, and China—capable of dominating the entire Eurasian land mass (including Western Europe) which, as the old geographers pointed out, means domination of the world as a whole.”[6]

Critics argue that Hill has had a long history of staking the entire international system on wanton U.S. interventionism. “Before Hill became [David] Brooks' ‘legendary foreign-policy sage,” noted Yale lecturer Jim Sleeper in 2014, he joined a host of neoconservatives, liberal hawks, and “other armchair warriors on Sept. 20, 2001, as Ground Zero lay smoking, to send President Bush strategic and moral advice on the letterhead of William Kristol's neoconservative Project for the New American Century (PNAC): ‘[E]ven if evidence does not link Iraq directly to the attack, any strategy aiming at the eradication of terrorism and its sponsors must include a determined effort to remove Saddam Hussein from power in Iraq. Failure to undertake such an effort will constitute an early and perhaps decisive surrender in the war on international terrorism.’”[7]

Hill subsequently attempted to deny his involvement with the letter, leading to a public rebuke by former PNAC director Gary Schmitt. Sleeper also noted a 2003 appearance on PBS News Hour in which Hill claimed that the Iraq War “will be a war that will not do great damage to Iraq, to its installations, to its infrastructure, or to its people. … The benefits will be the restoration of American credibility and decisiveness.” Sleeper added, “I heard Hill say much the same to an auditorium full of Yale students weeks before the start of the Iraq War. If this is how Hill addresses students, why is he teaching at Yale?”[8]

Hill attracted public attention for his role as a senior foreign policy adviser to Rudy Giuliani during his 2008 presidential campaign. Writing in The American Conservative, Michael Desch described Hill as one of the “allegedly non-neocon members” of Giuliani’s hard-right foreign policy team (a team that included such neocon luminaries as Norman Podhoretz, Martin Kramer, and Steve Rosen) whose views were nonetheless “squarely in the neoconservative camp … upon closer inspection.” Desch cites as evidence Hill’s apocalyptic warnings that “If we pull out of Iraq now, it’s just going to break the dam and there will be flood waters of chaos and murder across the region,” and that “if the Islamists can defeat the Middle Eastern states that seek reform and work with the international system, we will be faced with another world war.”[9]

Hill lent his credibility as a diplomat to Giuliani’s hawkish approach to foreign policy. In a 2007 op-ed for the conservative New York Sun, Hill wrote that on the one hand, “Mr. Giuliani would give the State Department and Foreign Service the attention and leadership it sorely needs.” On the other, Hill cautioned, “we need to understand that diplomacy, to be effective, must be conducted in tandem with, not as an alternative to, our economic, cultural, and military power resources.”[10]

Hill laid out his views on “grand strategy” in his 2010 book, Grand Strategies: Literature, Statecraft, and World Order. “The book's long skein of plot summaries and potted histories of more than 20 great novels and plays depict diplomats devising duplicitous and desperate strategies behind thin veils of diplomatic protocol and immunity to restrain the blood-dimmed tide in a Hobbesian world,” noted Sleeper in a review for Foreign Policy. “Reading between the lines of this book, it's not hard to understand how Hill's own career as a diplomat was marred, and ended, by too much diplomatic creative dissembling.”[11]

He is also the author of Trial of a Thousand Years: World Order and Islamism, a 2011 book which, according to the Hoover Institution Press, “analyzes the long war of Islamism against the international state system.”[12] Kirk H. Sowell, a lawyer and writer who contributes to the GlobalSecurity.org blog SITREP, criticized the work for equating al-Qaeda and other militant Islamist groups with Islamism writ large, ignoring both more mainstream Islamist organizations and the fact that al-Qaeda has never been a serious threat to the international system. Sowell also criticized Hill for making what Sowell regarded as errors in “a range of factual premises and historical characterizations on the Middle East.”[13]

[7] Jim Sleeper, “A Foreign-Policy Problem No One Talks About,” Huffington Post, May 5, 2014, http://www.huffingtonpost.com/jim-sleeper/a-foreignpolicy-problem-n_b_5266772.html.

[8] Jim Sleeper, “A Foreign-Policy Problem No One Talks About,” Huffington Post, May 5, 2014, http://www.huffingtonpost.com/jim-sleeper/a-foreignpolicy-problem-n_b_5266772.html.