Henry Sokolski is a widely published right-wing advocate of hawkish defense policies and frequent adviser to government panels and commissions on defense and intelligence. He serves as executive director of the Nonproliferation Policy Education Center (NPEC), a think tank devoted to developing “a truly effective nonproliferation policy” that shifts “the current debate away from academic stability arguments and traditional concerns about maintaining international norms to the more pressing proliferation problems.” Instead, NPEC seeks to explore what it terms long-term strategies for “the most implacable proliferators (e.g., North Korea, Iraq, Iran, Libya)” and whether “regime change [is] required in each case” and how regime change can be “accomplished without all-out wars.”[1]

Sokolski has been associated with a lengthy list of right-wing and neoconservative advocacy outfits, including the Hoover Institution, United Against Nuclear Iran (UANI), the National Institute for Public Policy, and the Heritage Foundation. He was a signatory to several open letters published by the Project for the New American Century, including its September 21, 2001 letter to President George W. Bush, which argued: "Even if evidence does not link Iraq directly to the [9/11] attack, any strategy aiming at the eradication of terrorism and its sponsors must include a determined effort to remove Saddam Hussein from power in Iraq. Failure to undertake such an effort will constitute an early and perhaps decisive surrender in the war on international terrorism."[2] 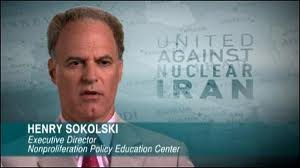 According to his UANI bio: “From 1989 to 1993, Mr. Sokolski served as Deputy for Nonproliferation Policy in the Office of the Secretary of Defense under then-Undersecretary of Defense for Policy Paul Wolfowitz.”[3] Sokolski’s NPEC bio states that he “received a medal for outstanding public service from Secretary of Defense Dick Cheney” for his work in the Pentagon at that time.[4]

NPEC's list of publications includes works from scholars representing a broad spectrum of the foreign policy elites, including a study by American Enterprise Institute scholar Thomas Donnelly entitled "Bad Options: Or, How I Stopped Worrying and Learned to Live with Loose Nukes," which describes a hypothetical scenario in which U.S. forces, working in tandem with allies in the Pakistani military, "reclaim [a captured nuclear] facility, render it safe, and attempt to recover whatever has been pirated away”; a presentation by respected proliferation expert George Perkovich entitled "A Realist Case for Conditioning the U.S.-India Nuclear Deal”; and a letter to Congress called "Current U.S.-India Deal Violates NPT," which includes signatures from both hawkish and moderate experts, including Thomas Cochran (Natural Resources Defense Council), Victor Gilinsky, John Holum, Daryl Kimball, Christopher Paine, Henry S. Rowen (Hoover Institution), Lawrence Scheinman, and Leonard Weiss.[5]

Sokolski is on the advisory board of United Against Nuclear Iran (UANI), a hawkish advocacy organization that opposed the July 2015 nuclear deal reached between Iran and major world powers. After UANI’s president, prominent nonproliferation expert Gary Samore, stepped down from his post due to his support for the deal, UANI CEO Mark Wallace cited Sokolski as a non-proliferation expert still with the organization who supports the group’s position on the deal.[6]

In response to a question from Vox’s Max Fisher about whether UANI would search for an “arms control wonk” to replace Samore given the “dearth of serious non-proliferation experts” who oppose the deal, Wallace stated:  “We have [head of the Nonproliferation Policy Education Center] Henry Sokolski.”[7] Wallace added: “Even David Albright, even though he’s not affiliated with us, has been very useful.”[8]

Sokolski has a track record criticizing efforts to engage Iran and diplomatically resolve the dispute over its nuclear program. In an October 2009 entry for National Review’s blog, “The Corner,” Sokolski ridiculed the then-recent agreement between Iran and the UN Security Council’s five permanent members (plus Germany) to allow inspections of Iran’s nuclear sites and send most of the country’ enriched uranium to Russia and France for processing. He wrote: “Iran emerged as the clear winner at yesterday’s nuclear summit with Russia, China, France, the U.K., the U.S., and Germany. Heading into the Geneva talks, the U.S. and the U.N. Security Council (UNSC) were demanding that Iran suspend all nuclear-fuel-making activities or face sanctions. After seven and a half hours of negotiations, though, the UNSC and Germany blinked, dropped any hint of penalizing Tehran, and let it continue to make nuclear fuel at Natanz.”[9]

Sokolski’s view of the agreement contrasted sharply with that of other experts. According to Gary Sick of Columbia University, the meetings in Geneva opened up the possibility of achieving some realistic goals, including “maximum inspection and monitoring of all aspects of Iran’s nuclear activities” and minimizing “Iran’s development of the precursors of a nuclear weapon.”[10]

In a 2012 piece for theNational Review, Sokolski called for regime change in Iran as a way to stop Iran’s nuclear program. “The underlying problem is the mullahs, and the only way to address this problem is to get them to leave,” Sokolski proclaimed. “But this will be possible only if Washington and its friends make clear, even as we talk with the mullahs, that their regime is illegitimate.” He added: “If we are truly serious about preventing nuclear proliferation and opposing Iran’s bullying of its neighbors, we will have to think through what delegitimatizing and disfranchising Iran’s current rulers will require. It would also help if we had a long-term plan for how we intend to help reform the Middle East.”[11]

In the same piece Sokolski argued that the United States should first overthrow the Syrian government before taking action against Iran. “Where should we begin? So far, President Obama has been unwilling to take any practical steps to facilitate the overthrow of Iran’s key client, the Assad regime in Syria. This needs to change,” he wrote.[12]

Sokolski was dismissive of the 2013 interim nuclear deal reached between Iran and the P5+1 group of nations. He opined in a December 2013 National Review op-ed: “[T]he prospects for pushing Iran six to twelve months farther away from a bomb option are hardly bright. The only way to dim these prospects even more is to kid ourselves about what has been accomplished. That must stop.”[13]

Sokolski was also supportive of Israeli Prime Minister Benjamin Netanyahu’s controversial March 2015 speech to Congress criticizing the Obama administrations nuclear negotiations with Iran. He declared at the time that Netanyahu had “rhetorically trumped the president and put the president and his negotiators in a bad place.” He further claimed that Netanyahu had drawn new “red lines” which, he claimed, the Obama White House had “avoided” because “they know they can’t answer them.”[14]

Sokolski heavily criticized the July 2015 comprehensive nuclear deal reached between Iran and the P5+1 world powers. According to the Christian Science Monitor: “Mr. Sokolski says he doesn’t have to dig too deep to find ‘bad things’ about the deal. He lists three: that the most fundamental limits on Iran’s nuclear activities lapse in 10 to 15 years, after which the country will be treated like ‘Japan, Brazil, Germany, and the Netherlands,’ which also have nuclear programs; that the deal appears to be ‘silent’ on Bushehr, Iran’s plutonium-producing power reactor; and that the deal is more than 100 pages long.”[15]

Regarding the length of the agreement, Sokolski told the Christian Science Monitor: “It is an illusion to think that a highly detailed agreement is a stronger one.”[16]

Sokolksi often teams up with other inside-the-beltway advocates of aggressive U.S. foreign policies against Iran and other countries. In 2005, for example, Sokolski coedited with Patrick Clawson of the Washington Institute for Near East Policy a volume entitled Getting Ready for a Nuclear-Ready Iran.[17] The book, which was published by the Strategic Studies Institute of the U.S. Army War College and partially funded by the Department of Defense, is based in part on the results of a working group on Iran convened by NPEC. According to the introduction, the first third of the book "reflects interviews with government officials and outside specialists and the work of some 20 regional security experts whom NPEC convened in Washington to discuss the commissioned research that is contained in this book." The second part addresses the question of "Tehran's Nuclear Endeavors: What's the Worry?" and the third part focuses on "what can be done" about Iran.[18]

The study concludes that "Ultimately, nothing less than creating moderate self-government in Iraq, Iran, and other states in the region will bring lasting peace and nonproliferation. This, however, will take time. Meanwhile, the United States and its friends must do much more than they are currently to frustrate Iran's efforts to divide the United States, Israel, and Europe from one another and from other friends in the Middle East and Asia; and to defeat Tehran's efforts to use its nuclear capabilities to deter others from taking firm action against Iranian misbehavior."[19]

[14] Howard LaFranchi, “Netanyahu speech on Iran: Did it put Obama on the back foot? (+video),” Christian Science Monitor, March 3, 2015,http://www.csmonitor.com/USA/Foreign-Policy/2015/0303/Netanyahu-speech-on-Iran-Did-it-put-Obama-on-the-back-foot-video.

[15] Howard LaFranchi, “Iran deal: Is it a 'pleasant surprise' or a centrifuge too far? (+video),” Christian Science Monitor, July 14, 2015,http://www.csmonitor.com/USA/Foreign-Policy/2015/0714/Iran-deal-Is-it-a-pleasant-surprise-or-a-centrifuge-too-far-video.

[16] Howard LaFranchi, “Iran deal: Is it a 'pleasant surprise' or a centrifuge too far? (+video),” Christian Science Monitor, July 14, 2015,http://www.csmonitor.com/USA/Foreign-Policy/2015/0714/Iran-deal-Is-it-a-pleasant-surprise-or-a-centrifuge-too-far-video.