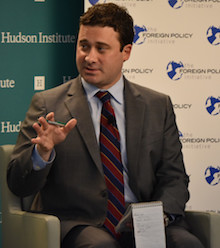 Josh Rogin is a reporter and columnist for the Washington Postand CNN who is known for his neoconservative tilt. He previously worked at Bloomberg View, where he often teamed up with the well-known neoconservative writer Eli Lake. He has covered foreign policy issues for Newsweek, the Daily Beast, Foreign Policy magazine, Congressional Quarterly, and other outlets.

In September 2018, Rogin broke a story revealing that Treasury Secretary Steve Mnuchin was stealthily obstructing the effort by U.S. President Donald Trumpto ban Iran from the international banking system known as SWIFT. This was part of the Trump administration effort to pressure Iran—after the United States violated and removed itself from the Iran nuclear deal—into negotiating new and stricter arrangements regarding not only its nuclear program but also its missile program and Iranian support for its allies throughout the Middle East.

The effort, like most of Trump’s Iran policy, was strongly opposed by Europe. Rogin was sharply critical of Mnuchin’s actions. “Mnuchin should make his arguments to the president, give him the information he already requested and let the president decide,” he wrote.[1]

Rogin’s reporting on the incident reinforced the perception that he uses his position as a journalist to push a neoconservative agenda. Wrote one journalist, “Rogin has been a sympathetic ear and scribe to Iran deal opponents and their fellow travelers on other foreign policy issues. … Rogin not only aired the anonymous officials’ concerns about Trump’s Iran policy falling apart. He also cited what he called two “great arguments” for forcing Iran out of the bank transaction system, known as SWIFT, from two officials at the Foundation for Defense of Democracies (FDD), the hawkish think tank that promotes regime change and war against Iran. Rogin presented no opposing view.”[2]

Rogin’s anti-Iran bent has been apparent for many years. In the last year of the Barack Obama administration, after the nuclear deal with Iran had been concluded, Rogin, he co-wrote a piece (with Lake) under the provocative heading “Obama’s Middle East Balancing Act Tilts Toward Iran,” which journalist Derek Davison described as “a masterful job [of] dutifully reproducing the Saudi view of American policy in the region.”

In the piece, Rogin and Lake wrote, “As the cold war between Iran and Saudi Arabia heats up, the Barack Obama administration is trying to straddle the fence and not take sides, but its actions tell a different story—they all seem to favor Tehran.

“Following the Saudi government’s announcement Saturday that it had executed 47 prisoners, including a popular Shiite cleric, the U.S. State Department did two things. First, it issued a statement expressing concern that Riyadh’s actions were “exacerbating sectarian tensions.” Then Secretary of State John Kerry called Iranian Foreign Minister Javad Zarif, urging him to try to de-escalate the crisis.

“Spokesmen for the White House and State Department on Monday insisted that the U.S. was not taking a side, and that Kerry was set to call Saudi Foreign Minister Adel al-Jubeir. But U.S. and Arab diplomats tell us that America’s Gulf allies, who feel most threatened by Iran, see things very differently.”[3]

Obama’s policy was much cooler toward the Saudis than that of his predecessors. But this was an attempt to manage the simmering tensions between Iran and Saudi Arabia, something very much in line with decades of U.S. policy and consistent with Obama’s policy throughout his administration.

As Davison points out, this was Lake and Rogin parroting a Saudi and neoconservative view of the incident, but it did not indicate any sort of “tilt” toward Iran.

Rather, it was about Saudi Arabia’s ongoing distaste for the Iran nuclear deal. Davison wrote, “Ultimately, Rogin and Lake aren’t really trying to describe an actual shift in U.S. policy so much as they’re taking the opportunity of the execution of Sheikh Nimr al-Nimr and its fallout to once more express their—er, I mean the Saudis’—displeasure with the nuclear deal.”

The Saudi and U.S. neoconservative view were in lockstep on Iran. Davison then goes on to quote Lake and Rogin again: “At the root of the problem for Sunni Arab states is the nuclear deal reached last summer by Iran and Western nations. When the White House sold the pact to Congress and Middle Eastern allies, its message was clear: Nothing in the deal would prevent the U.S. from sanctioning Iran for non-nuclear issues. Yet that has not been the case.”

In fact, sanctions on Iran over several issues—including human rights and Iran’s ballistic missile development—continued unabated after the nuclear deal was consummated.[4]Lake and Rogin ignored this point.

A History of Controversy

In August 2013, the United States temporarily closed 22 embassies in various countries in Africa and the Middle East after it intercepted a message from al-Qaeda leaders that suggested there might an attack in the region. While the threat eventually passed, Lake and Rogin reported several days later that the intercepted communication was a “conference call” among many leaders of al-Qaeda cells—a collection they cited one anonymous official as referring to as the “Legion of Doom”—suggesting that the group was getting dramatically stronger.

Rogin and Lake quoted then-Senator John McCain (R-AZ) in the piece. McCain, who had, only nine months earlier, lost to Barack Obama in the 2012 presidential election, saying “This may punch a sizable hole in the theory that al Qaeda is on the run. …There was a gross underestimation by this administration of al Qaeda’s overall ability to replenish itself.”[5]

But the article was immediately assailed as dubious. Ken Silverstein of Harper’s Magazine wrote, “The thrust of Lake and Rogin’s initial report—that Al Qaeda leaders got together to discuss strategy by phone—was false. The pair then effectively retracted the key element of their story by relabeling the call a “non-telephone communication” while failing to acknowledge the error or that at least one of their sources—the Legion of Doom quipster—was either ignorant of the facts or a liar. They even went on to claim that they’d been vindicated by the CNN report, which explicitly refuted their original account.”[6]

In 2014, Rogin entered, uninvited, a private meeting of the Trilateral Commission—an NGO which brings together leaders from the United States, Europe, and Japan to foster cooperation between them—and recorded comments by U.S. Secretary of State John Kerry. Attendees had agreed not to record or make statements to the press about any of the discussion in the room, but Rogin, having not been invited, was not bound by that agreement.[7]

Soon after, two articles based on Kerry’s remarks at the meeting appeared from Rogin. The first broke the news about a new round of sanctions within days against Russia for its invasion of Crimea.[8]The second quoted Kerry saying to the other attendees that without a two-state solution to the Israeli-Palestinian conflict, Israel risked becoming “an apartheid state,” a highly controversial term in U.S. political discourse.[9]

The latter report set off a firestorm in the American Jewish community that was deeply felt in Washington. Kerry quickly apologized, stating, “If I could rewind the tape, I would have chosen a different word to describe my firm belief that the only way in the long term to have a Jewish state and two nations and two peoples living side by side in peace and security is through a two state solution.”[10]

Rogin did not admit to having snuck into the commission meeting. Instead, as journalist Dylan Byers pointed out, “Rogin attributed his knowledge of Sec. Kerry’s remarks to ‘an attendee.’ In the second article, he attributed them to ‘a recording… obtained by The Daily Beast.’”[11]

A few days later, Rogin brashly wrote in the Daily Beast, “Did I enter the Trilateral Commission event with Kerry, tape it, and then reveal to the world what our Secretary of State is saying to influential world leaders behind closed doors? Damn right I did.” He then proceeded to explain how he did it, why he felt justified and that “if I had to do it all over again, I’d do it in the exact same way.”[12]

In 2009, Rogin recorded a talk between Atlanticreporter Jeffrey Goldbergand then-Israeli ambassador to the United States Michael Orenat a Yom Kippur service in Washington. As Goldberg explained, “For those non-Jews out there, or for my apostate Jewish readers (some of my best friends are apostate Jews), it would be a violation of the law and spirit of Yom Kippur to [have taped the dialogue or taken notes on it].” Goldberg accused Rogin of quoting Oren out of context. He said that Rogin responded to him, “I attended the talk and wrote the story from notes I jotted down when I got home. I assumed a recording device would not be kosher.”

Goldberg stated, “What is also not kosher, of course, is quoting from memory! I don’t know a single journalist who could accurately reproduce 90-word quotes after a single hearing.”[13]