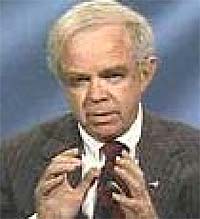 Martin Anderson is a fellow at the Hoover Institution, a conservative think tank based at Stanford University.[1] An economist known for his espousal of the philosophy of conservative author Ayn Rand,[2] Anderson has also been a key foreign policy hawk, having served as a member of the Cold War-era version of the Committee on the Present Danger and influencing the development of the Star Wars missile defense system.

Although best known for his role as an advisor to President Ronald Reagan (and for his staunch advocacy of Reagan’s legacy), Anderson served several other Republican presidents, including Richard Nixon and George H.W. Bush. During the George W. Bush presidency, Anderson was tapped to serve on the controversial Defense Policy Board, which was briefly chaired by neoconservative heavy weight Richard Perle and staffed with a number of Anderson’s colleagues at the Hoover Institution.[3]

While working for then-presidential candidate Reagan in 1979, Anderson helped generate ideas for what would later be dubbed the Star Wars missile defense system. Writes one historian of the Reagan era:

“In the summer of 1979, . . . Reagan made a trip, with one of his top aides, Hoover Institution economist Martin Anderson, to the North American Air Defense Command (NORAD) post in Colorado, where he witnessed a special demonstration of this center’s tracking and display capabilities. . On the plane ride back to California, Reagan and [Anderson] . talked about the apparent terrible vulnerability of the United States, against which we, seemingly, were helpless. Soon after returning to California, Anderson was instructed to prepare a set of papers which would establish Reagan’s position on strategic defense for the upcoming 1980 campaign. One of these reports presented three major options — first, following Jimmy Carter’s early policy of relying on good Soviet intentions (‘dangerous folly’ in Anderson’s opinion); second, a massive American arms buildup (which Anderson felt was ‘apt to frighten as many people as it consoles’); and third, to build a radically new, ‘preventative’ air intercept defense system, much like Star Wars as it later became known.”[4]

His most recent book, co-written with his wife Annelise Anderson, is Reagan’s Secret War: The Untold Story of His Fight to Save the World from Nuclear Disaster. Published in 2009 (Crown), Reagan’s Secret War highlights Reagan’s efforts to abolish all nuclear weapons, a fact that is often ignored by many pro-Reagan conservatives (see Robert Farley, “The Nuclear Posture Attack,” Right Web, June 2, 2010).

[3]  Andre Verloy and Daniel Pollti, “Advisors of Influence: Nine Members of the Defense Policy Board Have Ties to Defense Contractors,” Center for Public Integrity, March 28, 2003, http://www.publicintegrity.org/articles/entry/374/.