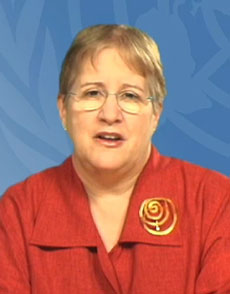 Ruth Wedgwood is an international law scholar based at the Johns Hopkins School of Advanced International Studies (SAIS).[1] A staunch defender of the "war on terror" and controversial legal provisions that encroach on civil liberties and human rights, Wedgwood is the vice chair of the neoconservative Freedom House, a member of the Hoover Institution's Task Force on National Security and Law, and a former member of Donald Rumsfeld's Defense Policy Board. A strident supporter of the state of Israel, Wedgwood is also a former board member of UN Watch, a neoconservative advocacy group that rails against perceived anti-Israel bias at the United Nations.

Wedgwood has long argued for a militarized U.S. response to terrorism and a prolonged war on terror. "After al Qaeda’s deadly September 11 attacks targeting New York and Washington, the American response cannot be derided as disproportionate," she wrote in late 2013 after President Obama delivered an address promising to ease the United States off its war footing. "The belief that because we are tired, and need to focus on our economic problems, we can afford to wish away the danger of foreign foes," she wrote, "is simply wrong."[2] 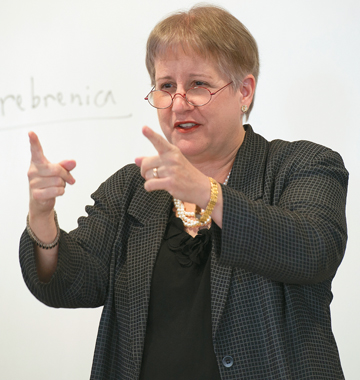 In particular, Wedgwood has argued against processing terrorism suspects or foreign detainees in the U.S. criminal justice system. "The methods of criminal justice are reactive, finding facts after a catastrophe happens," she wrote in 2013, adding that prosecution of terrorism suspects provides only a "chimera" of security.[3] It was a reprise of an argument she had made as far back as a 2004 essay in Foreign Affairs. "A war is in fact raging, and criminal law is too weak a weapon," she argued. "The law of armed conflict … allows measures, such as the preventive internment of enemy combatants during the conflict, that do not require the full-dress procedure of criminal trials."[4] Wedgwood also stridently supported the PATRIOT Act, calling prior restrictions on the use of wiretaps "kinda crazy."[5]

Wedgwood's argument prompted a rebuke from Kenneth Roth, the executive director of Human Rights Watch. Wedgwood "wants to invoke war rules in settings far from these traditional battlefields," Roth wrote. "In her view, the 'war against terrorism' is open-ended and global, allowing the U.S. government unilaterally to designate terrorism suspects as 'enemy combatants,' at home or abroad, and to summarily detain or kill them. That radical proposition jettisons the most basic guarantees of criminal justice, leaving our liberty and our lives protected only by the government's professions of good faith."[6]

Wedgwood has occasionally criticized the excesses of U.S. war conduct—in particular at the Iraqi prison of Abu Ghraib, where U.S. soldiers were convicted of grossly abusing and torturing prisoners. "The worthy ambitions of the war in Iraq—and I still believe there were many—cannot mask the moral pain of the Abu Ghraib scandal," she wrote in a 2004 Washington Post op-ed. "The cruel and humiliating mistreatment of detainees held in an American prison was unworthy and illegal. It violated our plain and public commitment to observe the humane standards of the Geneva Conventions in the Iraqi conflict. It jeopardizes our authority to intern captured combatants."[7]

On the other hand, Wedgwood has continued to support the detention of “unlawful combatants” indefinitely, arguing against closing the controversial prison at Guantanamo Bay as late as 2013. "Combatants returned to Yemen not infrequently escape through the back door of Yemeni jails," she wrote in June 2013, even though most of the remaining detainees at Guantanamo had been cleared for release by then.[8]

On other Middle East issues, Wedgwood has espoused a hawkish, "pro-Israel" line, often defending some of Israel's most controversial actions. After Israeli forces attacked a humanitarian aid flotilla to Gaza and killed nine unarmed activists, for example, Wedgwood defended the attack as legal under "ordinary law of armed conflict" in a 2010 appearance on PBS Newshour. When challenged by a fellow guest who countered that Gaza was not a warzone but a "conquered territory," Wedgwood asserted that opening Gaza's ports would enable a "rearming of Hamas" and accused the flotilla activists of attempting to "denude Israel of what it thinks it was guaranteed in the 1993 Oslo Accords, which is the control of the external borders of Gaza and West Bank."[9] In a 2004 white paper for the neoconservative Foundation for Defense of Democracies, Wedgwood also defended Israel's construction of the controversial "security barrier" in the West Bank—a wall that went deep into Palestinian territory, cutting off farms and villages from each other and displacing residents.[10]

Wedgwood has echoed neoconservative claims about Iran, frequently accusing the country matter-of-factly of developing nuclear weapons even as U.S. intelligence analysts have insisted since at least 2007 that it is not. In 2012, for example, when Iran invited UN Secretary-General Ban Ki Moon to a meeting of the Non-Aligned Movement (NAM) in Tehran, Wedgwood insisted that Ban's presence at the meeting—which hosted delegations from a majority of the world's countries—would be "wildly unsuitable at a time when the U.N. Security Council and the International Atomic Energy Agency are working desperately to force Iran to give up its nuclear-weapons program and to isolate the bloody regime of Syria’s president. The U.N.’s advocacy for human rights and arms control will be visibly cast aside." Wedgwood referred to the gathering as a "festival of violence" and also took the opportunity to lament the influence of the NAM—which is historically independent of major power blocs like NATO or the former Soviet Union—at the United Nations. "The impending celebration of blood lust in Tehran shows why outsourcing key foreign-policy decisions to the United Nations can be such clear folly. It amounts to empowering a wholly anti-American caucus," she complained.[11]

Wedgwood has been a vocal advocate for the Mojahedin-e-Khalq (MEK), an Iranian dissident group based in Iraq that was long considered a terrorist group by the United States and is likened by some of its critics to a cult. The group—which is deeply unpopular in Iran for fighting on the Iraqi side of the Iran-Iraq War, and deeply unpopular in Iraq for cooperating with Saddam Hussein's purges of Shiites and Kurds—maintains a base in Iraq, where its followers and their families have been subject to harassment and occasional attacks by Iraqi security forces. Speaking before a 2012 conference of Iranian regime change "solidarity" activists, Wedgwood likened the situation at the camp to the situation of European Jews in the run-up to World War II and suggested that backing the MEK was key to promoting a political transition there. "More is at stake here simply than the important welfare and human rights of a large collection of human beings," she said. "It really is the entire stability of the Middle East. … Seeking transition in Iran is not simply an issue for the region but an issue for nuclear safety on the entire globe."[12] In a 2011 FoxNews.com op-ed coauthored with former Attorney General Michael Mukasey, Wedgwood supported the idea of the U.S. Congress withholding funding for the United Nations if it refused to intervene in the standoff.[13]

Wedgwood has served a number of U.S. administrations in various capacities, including as a U.S. representative to the UN Human Rights Council. "Earlier in her career, as a federal prosecutor in New York," according to her Hoover bio, "she prosecuted a Soviet-bloc nuclear spy and weapons dealers’ shipping to Iraq and Iran. She also devised the innovative trial procedures first used in the Kampiles espionage case and later incorporated in the Classified Information Procedures Act. She has served on the Defense Policy Board, the Secretary of State’s Advisory Committee on International Law, and the CIA Historical Review Panel."[14]