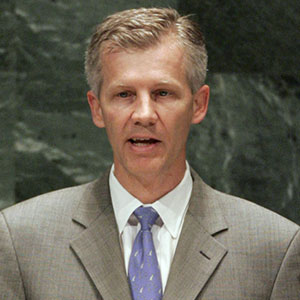 Stephen Rademaker is a lobbyist and lawyer who served as an assistant secretary of state in the George W. Bush administration. A veteran counselor for a host of government agencies, Rademaker is currently a principal at the Podesta Group lobbying firm and a project adviser at the Bipartisan Policy Center (BPC), a think tank that has staked out a decidedly hawkish position on Iran. He is the spouse of Danielle Pletka, the vice president of foreign and defense studies at the neoconservative American Enterprise Institute.

Rademaker, a strong proponent of the 2003 invasion of Iraq, authored the Iraq Liberation Act of 1998, which was signed into law by then-President Clinton and formed the basis for Congress’ October 2002 authorization for the use of military force against Iraq. As a principal at the Podesta Group lobbying and public affairs firm, which counts the Iraqi government among its clients, Rademaker has financially profited from the war. According to the Intercept, the Podesta Group entered into a $1 million contract with the Iraqi government in 2013, which was renewed in 2014 for an additional $1 million, and which Rademaker may have earned upwards of 20 percent of depending on the degree of his involvement in helping secure the contracts.[1] 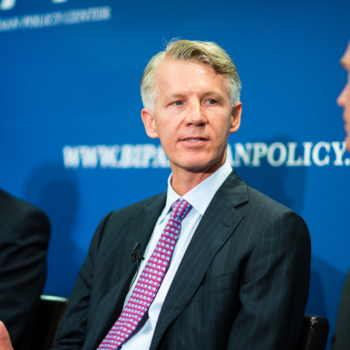 Rademaker has also called for the United States to put on hold efforts to reach nuclear arms control agreements with Russia in response to the 2014 Ukraine crisis. In an October 2014 Washington Post op-ed, Rademaker said President Obama should follow a similar approach to Russia as Jimmy Carter did in response to the 1979 Soviet invasion of Afghanistan, which he said included  “imposing stiff sanctions on Moscow, arming Afghans who were resisting the Red Army, and asking the Senate to suspend consideration of the then-pending SALT II strategic arms control treaty.”[2]

“Much criticism has been directed at Obama’s refusal to provide Ukraine with the wherewithal to defend itself, but his unwillingness to let Russian actions divert him from his arms control agenda—particularly his quest to build a ‘world without nuclear weapons’—may be sending an even more important signal of weakness and strategic confusion to Russia,” Rademaker wrote in the Washington Post article. “Rather than pushing for further nuclear cuts, Obama should, like President Carter, put his arms control agenda on hold until Russian behavior improves.”[3]

Rademaker, whose portfolio at the State Department included “international security and nonproliferation,” has frequently accused Iran of developing nuclear weapons and urged a militarized U.S. response. In January 2014, for example, shortly after Iran and six world powers reached an interim agreement on curbing and verifying Iran’s nuclear enrichment program, Rademaker penned an op-ed for The Hill claiming that “Iran could currently produce enough weapons grade uranium for a nuclear device in as little as five weeks” and suggested that Iran could cheat on its end of the agreement.[4]

That same month, he added his name to an open letter drafted by the neoconservative Foreign Policy Initiative—a successor group to the Project for the New American Century, which marshaled Beltway support for the Iraq war a decade before—calling on Congress to “pressure” Iran to keep its end of the agreement. The letter strongly implied support for sanctions legislation introduced by the hawkish Sens. Mark Kirk (R-IL) and Robert Menendez (D-NJ) and backed by the American Israel Public Affairs Committee (AIPAC). Journalist Jim Lobe described the package as a “Wag the Dog” bill that was designed by Iran hawks, following the lead of the right-wing Israeli government, to scuttle the talks by punishing Iran with new sanctions legislation even as it negotiated with Washington and its partners.[5]

Rademaker has contributed to several BPC reports calling on the United States to bolster its military presence in the Middle East in response to the Iranian nuclear enrichment program, which Rademaker and BPC have insisted—contrary to the estimation of the U.S. intelligence community—is geared towards producing a nuclear weapon. Along with other outspoken hawks like Michael Rubin, Michael Makovsky, and Dennis Ross, Rademaker helped draft a 2008 report calling on the next U.S. president to issue Iran an ultimatum to suspend its nuclear enrichment by a certain time, after which the United States would “have to target not only Iran’s nuclear infrastructure, but also its conventional military infrastructure in order to suppress an Iranian response.”[6] Jim Lobe lampooned the 2008 report as a “roadmap to war” that was transparently designed to force a confrontation over the nuclear issue.[7]

In subsequent publications, BPC continued to reiterate the thrust of the report’s recommendations, which Rademaker then repeated during congressional testimony in 2012. “When it comes to credibly demonstrating that, if all else fails, force will be used if necessary to prevent Iran from achieving a nuclear weapons capability, we believe U.S. policy has fallen short,” he told the House Armed Services Committee in June 2012. Claiming that Iran had made “inexorable progress” toward a nuclear weapon and echoing the common neoconservative trope that “traditional deterrence” is “unlikely to be effective against Iran,” Rademaker called on Congress and the Obama administration “to enhance the credibility of the military option.”[8]

Despite his preoccupation with nonproliferation in Iran, as assistant secretary of state Rademaker played a key role in the Bush administration’s negotiation of a 2005 nuclear agreement with India. In the deal, the United States agreed to transfer nuclear energy technology to India, which developed a nuclear weapon in the 1990s. The year after the agreement was concluded, Rademaker left the State Department to take “a lucrative lobbying job” at the same firm the Indian government had hired to push for the deal.[9]

The deal was controversial. By offering India nuclear technology without pressuring it to disarm, an analyst for the Center for American Progress argued, it “abandoned the one incentive states have to stay in the [Nonproliferation Treaty], without providing an alternative framework to sustain the effort to control proliferation.”[10] The administration, however, may have had other motives. In 2007, Rademaker made headlines in India by suggesting that, for its end of the deal, India had been “coerced” into voting against Iran at the International Atomic Energy Agency, a claim the U.S. government subsequently denied.[11]

Rademaker’s BPC bio boasts that he has worked “in all three branches of government.” In Congress, he worked in the office of Majority Leader Bill Frist (R-TN), served as counsel to the House select committee that led to the creation of the Department of Homeland Security, and held several posts on the House Committee on International Relations. In addition to his State Department work, Rademaker also offered legal counsel to several executive agencies, including the Peace Corps, the National Security Council, the George H.W. Bush White House, and the U.S. International Trade Commission. For one year in the 1980s, he clerked for a federal D.C. circuit judge.[12]

[4] Blaise Misztal and Stephen Rademaker, “After deal with Iran, fund and verify,” The Hill, January 28, 2014, http://thehill.com/blogs/congress-blog/foreign-policy/196537-after-deal-with-iran-fund-and-verify#ixzz2saDJQLNK.