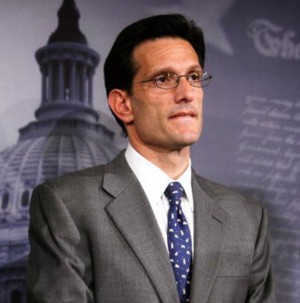 Eric Cantor is a former Republican member of Congress from Virginia. Although he was once considered a likely successor to Republican House Speaker John Boehner (R-OH), Cantor was unseated in a surprise primary defeat by a Tea Party challenger in June 2014.[1] Cantor’s primary loss was the first suffered by any House Majority Leader since the position was created in 1899.[2]

Since his ouster from Congress, Cantor has worked for an investment bank and commented regularly on U.S. politics. He was hired by the Wall Street investment bank Moelis & Co., where he reportedly was offered a $3.4 million salary. He has also remained active publicly, appearing frequently as a commentator on politics for various mainstream and rightwing networks and serving on the board of advisers of the neoconservative Jewish Institute for National Security Affairs.

During the 2016 election, Cantor backed the candidacy of Donald Trump, saying that he would vote for the real estate mogul even though he opposed Trump’s immigration views. He told the Boston Globe that the “Trump-Clinton election [is] probably not the best choice for anybody. … “He’s a businessman . . . [but] he’s been on so many sides of every issue that you never know.”

Cantor has maintained close relations with key groups from the U.S. “Israel Lobby,” including the American Israel Public Affairs Committee and the neoconservative Jewish Institute for National Security Affairs.[3] After his 2014 primary defeat, the hawkish Republican Jewish Coalition praised Cantor—who was the only Jewish Republican in Congress during his tenure—as “an important pro-Israel voice in the House and a leader on security issues, including Iran sanctions.”[4]

As a leading conservative “pro-Israel” member of Congress, Cantor often served as the public face of efforts to attack critics of U.S.-Israeli relations. He also proved more willing than other members of the Republican leadership to defend controversial statements by his colleagues. In July 2012, for instance, Cantor was one of a small number of public figures who defended Rep. Michele Bachmann (R-MN) after she contended—based on the findings of a report published by the controversial Center for Security Policy—that the Obama administration had been “infiltrated” by the Muslim Brotherhood, highlighting the case of Huma Abedin, a widely respected longtime aide to Hillary Clinton who comes from a Muslim family.

While Sen. John McCain and other leading figures denounced the accusation as a witch-hunt, Cantor defended Bachmann, telling CBS’s Charlie Rose: “If you read some of the reports that have covered this story, I think that her concern was about the security of the country.”[5] McCain, by contrast, said, “These allegations about Huma and the report from which they are drawn are nothing less than an unwarranted and unfounded attack on an honorable woman, a dedicated American and a loyal public servant. … These attacks on Huma have no logic, no basis, and no merit. And they need to stop now.”[6]

Cantor avidly supported a one-sided, “pro-Israel” approach to the Israeli-Palestinian conflict while in Congress. Notably, he peddled the right-wing narrative that the “peace process” has stalled primarily because of Palestinian resistance to negotiations, rather than an aggressive Israeli push to colonize the occupied territories before a settlement is reached. “Israel has always been committed to the peace process, including advocating for direct talks between Israelis and Palestinians,” he told Haaretz in March 2010. “Unfortunately, the Palestinian government continues to insist on indirect talks and slowing down the process.”[7] In other remarks, he said that Palestinian culture is “infused with resentment and hatred” and that Palestinians “must demonstrate that they are worthy of a state.”[8]

Cantor opposed the September 2011 bid by the Palestinian Authority to seek recognition as a state from the UN General Assembly. “It is time for [PA President Mahmoud] Abbas to forgo his public relations battle and return to the negotiating table,” Cantor wrote in a joint op-ed with Democratic whip Steny Hoyer in the New York Daily News. “The U.S. will likely reconsider its assistance program for the PA and other aspects of U.S.-Palestinian relations should the Palestinians choose to move forward in requesting a vote on statehood,” they warned.[9] Not long before threatening to dock U.S. assistance for the Palestinian Authority, Cantor had proposed removing U.S. assistance to Israel from the foreign aid budget and integrating it into the defense budget, which was less likely to be cut.[10]

At times, Cantor appeared to openly align himself with the right-wing government of Israeli Prime Minister Benjamin Netanyahu over the Obama administration. When the administration protested Israel’s announcement that it would allow the construction of over a thousand new Jewish dwellings in Palestinian East Jerusalem, for example—a flagrant snub of the peace process that coincided with Vice President Joe Biden’s March 2010 visit to the city—the congressman accused the administration of ignoring “a host of Palestinian provocations that undermine prospects for peace in the region.” He added, “For this administration to treat our special relationship with Israel, one of our closest and most strategic democratic allies, in this fashion is beyond irresponsible and jeopardizes America’s national security.”[11] In other circles, the Israeli announcement itself was widely considered an Israeli slight to the United States.[12]

Cantor met personally with Netanyahu in New York in November 2010, shortly after a sweep of Republican victories swept the party into control of the House. Politico’s Laura Rozen noted that it was “unusual, if not unheard of” for an Israeli prime minister to meet individually with a member of Congress.[13]

Cantor’s office released a statement saying that Cantor had “stressed [to Netanyahu] that the new Republican majority will serve as a check on the Administration” and “made clear that the Republican majority understands the special relationship between Israel and the United States.” The remark prompted the Jewish Telegraph Agency’s Ron Kampeas to remark, “I can’t remember an opposition leader telling a foreign leader, in a personal meeting, that he would side, as a policy, with that leader against the president.”[14] In the Washington Monthly, Steve Benen pointed out that Cantor himself had harshly criticized Democratic leader Nancy Pelosi for meeting with Syrian President Bashar al-Assad in 2007, accusing her of possibly violating a U.S. statute against “communicat[ing] with a foreign government to influence that government’s behavior on any disputes with the United States.”[15]

Cantor’s corpus of statements on Israel led Foreign Policy’s Dan Drezner to coin a new term in Cantor’s honor. “I hereby propose the following definition,” Drezner wrote in March 2012. “[I]f a prominent U.S. official or foreign policy commentator proposes a standard for U.S. policy towards Israel that would never be used for any other U.S. ally or treaty partner, then they have ‘gone the full Cantor.’”[16]

Cantor advocates broadly conservative views on a range of other foreign and domestic policy issues. He was particularly critical of the Obama administration on Middle East policy. In a February 2012 op-ed for CNN.com, for example, Cantor wrote that Iran is “determin[ed] to achieve nuclear weapons capability” and called for expanded sanctions against the country, hinting further that “Iran’s leaders must feel dramatic pressure that imperils their very hold on power.”[17]

In the same op-ed, Cantor called Syria “low-hanging fruit” and expressed impatience with the diplomatic process to end the violence. “America should not defer to obstinate Russian diplomats at the United Nations about Syria,” he wrote. “Instead, we should lead an international effort to apply tremendous pressure on Syria and provide demonstrable support to its growing political opposition.”[18] He later supported a White House plan to arm the Syrian rebels.[19]

Cantor voted in 2002 to authorize the Iraq War and subsequently supported a 2006 resolution declaring the occupation of Iraq a part of the global “war on terror” that should have no prescribed end date.[20]

Cantor consistently voted against abortion rights, same-sex marriage benefits, and hate-crime protections for gays and lesbians, and has supported free trade agreements, natural gas subsidies, and the construction of a fence along the U.S.-Mexican border.[21] Although he expressed support for offering a pathway to citizenship for undocumented immigrants who served in the military or who were brought to the country as minors, he consistently claimed credit for blocking any consideration of a comprehensive immigration reform bill during his tenure in the House.[22]

A self-styled deficit hawk, in May 2011 Cantor controversially opposed providing federal disaster relief funds for the tornado-stricken town of Joplin, Missouri—where over 100 people had been killed in a recent storm—unless funds were first cut from other programs. Cantor made similar demands of disaster relief funds following Hurricane Irene in August of that year.[23] In September, critics noted that Cantor had opposed spending $30 billion—offset by cuts elsewhere—to modernize U.S. infrastructure, even as he supported authorizing more than $120 billion in deficit spending to finance similar projects in Iraq and Afghanistan.[24]

[20] On The Issues, Eric Cantor, http://www.ontheissues.org/va/eric_cantor.htm#Foreign_Policy.

[21] On The Issues, Eric Cantor, http://www.ontheissues.org/va/eric_cantor.htm.

[20] On The Issues, Eric Cantor, http://www.ontheissues.org/va/eric_cantor.htm#Foreign_Policy.

[21] On The Issues, Eric Cantor, http://www.ontheissues.org/va/eric_cantor.htm.