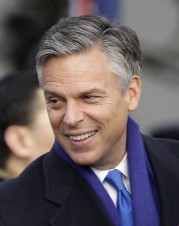 Jon Huntsman, a millionaire scion of the Huntsman chemical empire, is a former Utah governor who served as Barack Obama’s first ambassador to China and later as a candidate for the 2012 GOP presidential nomination. In 2017, Donald Trump appointed Huntsman ambassador to Russia.[1]

Huntsman’s 2012 presidential campaign was short-lived and many speculated that the primary goal was to position the candidate for future campaigns.[2] During the 2012 campaign, Huntsman often endeavored to position himself as the moderate Republican in a crowded conservative field, famously tweeting that “I believe in evolution and trust scientists on global warming. Call me crazy.”[3]

While Huntsman is often described as a centrist on foreign policy he has sought to distance himself from Democrats and pushed a hardline a numerous national security issues. A key focus has been promoting free trade deals, in contrast to the protectionist rhetoric of Donald Trump. He once criticized the Obama administration for stifling trade deals “unless the measures were coupled with expanded funding” for union-backed entitlement programs.[4]

Huntsman also criticized President Obama for his record on Afghanistan, telling the right-wing National Review, “The future of the United States is not going to be determined by firefights on the Hindu Kush.”[5] Huntsman opposed the Obama administration’s intervention in Libya, saying: “With all of our deployments and all of our engagements abroad, we need to ask a fundamental question: Can we afford to do this? That should be driven by the second point, which is whether or not it’s in our national security interest. I felt from the beginning that Libya was not in our core national security interest.”[6]

Huntsman has pursued a hawkish stance on Iran’s nuclear program. “I cannot live with a nuclear-armed Iran,” he once said. “If you want an example of when I would use American force, it would be that.” After the Iran nuclear deal was concluded in 2015, Hunstman co-authered with John Lieberman a blistering criticism of the agreement.

Huntsman has stressed the importance of the U.S. relationship with Israel, calling it the “most meaningful relationship in the Middle East”[7] and loudly criticizing President Obama’s “misguided” Middle East policies, which he wildly claimed “directly contributed to a breakdown of the peace process.”[8]

Huntsman accused the Obama administration of weakening the United States: “Once the United States vacates leadership responsibilities, others will be reluctant to turn to us in the future. These events do not unfold in a vacuum and the world watches closely how we carry ourselves. There is increasing talk and more speculation about our country’s trajectory. The administration’s actions portray us as a disengaged country in decline rather than a leader, and countries around the world will begin to discount the United States as a factor in their respective futures.”[9]

During his 2012 presidential campaign, Huntsman argued that the United States was “in many parts of the world that don’t make sense for our national security or our budget. He would also work to open more foreign markets for American businesses. In this economy, we should be aggressively pursuing more and greater free trade, not reverting to protectionism or waiting for sign-off from the unions.”[10]