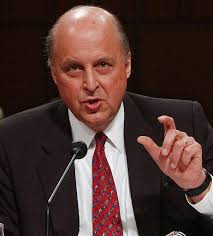 John Negroponte, a veteran U.S. diplomat who has served several administrations dating back to the late 1960s, had a number of roles in the George W. Bush administration, including as first national intelligence director and ambassador to Iraq and the United Nations. In 2009, Yale University hired Negroponte to co-teach its Studies in Grand Strategy seminar.[1] As of 2016, he is a senior lecturer at Yale’s Jackson Institute for Global Affairs.[2]

In 2015, Negroponte blasted President Obama for allegedly distancing the United States from Israel. “My experience in the conduct of American foreign policy over 50 years it’s been pretty much an article of faith that we must do our best to be supportive of Israel,” he opined in an interview with Fox News. He also denounced the Obama administration’s diplomatic efforts to curtail Iran’s nuclear program, which led to a landmark deal in July 2015. “I think the worst image would be to see us moving towards some kind of agreement with Iran at the same time as we’re moving towards a split with Israel,” Negroponte declared.[3] 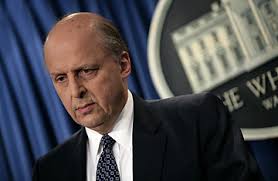 Negroponte’s final post during the Bush presidency was as deputy secretary of state, the number two position at the State Department behind Condoleezza Rice. The move, which President Bush announced in January 2007, was widely regarded as a demotion for Negroponte, who since 2005 had served as the country’s first director of national intelligence (DNI), a Cabinet post created by Congress after 9/11 to improve coordination between the country’s various intelligence agencies. Negroponte, a career diplomat, had previously served the Bush administration as ambassador to Iraq and ambassador to the United Nations .[4]

When Negroponte’s predecessor at State, Robert Zoellick, stepped down in mid-2006 to take up a post at Goldman Sachs, Rice reportedly had difficulty finding a replacement. According to a Los Angeles Times editorial, Rice’s “choices … either declined to sign up for a stint likely to be best remembered for the debacle in Iraq or [were] vetoed as too liberal by the White House.”[5] Negroponte was apparently “the only person acceptable to both Rice and [Vice President Dick] Cheney.”[6]

In 2006, when Negroponte left his position as director of national intelligence and moved to State, some observers worried about possible negative impacts on the country’s intelligence infrastructure. Although the DNI job involved numerous responsibilities, Bush constrained the post by granting it little control over funding. Under Bush, nearly two-thirds of the country’s intelligence budget was controlled by the Defense Department, which saw a considerable expansion of its intelligence responsibilities during the Rumsfeld era. Said Sen. Susan Collins (R-ME) about Negroponte’s move: “I’m disappointed that Negroponte would leave this critical position when it’s still in its infancy. There are a number of people who could ably serve as deputy secretary of state, but few who can handle the challenges of chief of intelligence.”[7]

Creating a unified, efficient intelligence apparatus was also seen as a major challenge because of the turf wars that proliferated during President Bush’s first term. These interagency disputes ranged from the creation of new intelligence operations tightly controlled by Rumsfeld and his underlings (including Stephen Cambone, Paul Wolfowitz, and Douglas Feith) to the sidelining of the State Department and the CIA by the Pentagon, White House, and Vice President’s Office.[8] Negroponte’s appointment to DNI came on the heels of Rumsfeld’s announcement that the Pentagon would allow the military to organize highly classified squads to collect intelligence overseas. The appointment also followed closely on then-CIA Chief Porter Goss’s efforts to rid the agency of those who did not fall into line with Bush administration policies in the Middle East and elsewhere, leading some high officials to leave. One former intelligence official said at the time, “The CIA is a wounded gazelle on the African plain. It’s a pile of bleached bones.”[9]

Regarded as a hard-nosed diplomat without an overarching ideological agenda, Negroponte was considered an apt choice to wade through the competing intelligence agendas, and an appointee uniquely palatable to all of the political factions inside the Bush administration. Since the 1960s, Negroponte had earned a reputation as a determined political operative who gets the job done—however “dirty” or undiplomatic. Unlike other members of Bush’s foreign policy team, Negroponte had no direct connections to the network of rightist and neoconservative policy institutes, think tanks, and foundations that strongly influenced the administration policies.[10]

Negroponte’s record during his four decades of government service have at times been plagued by turmoil and accusations of collusion in gross human rights violations. His work has included such diverse roles as advising the client U.S. government in South Vietnam during the Vietnam War, supervising the Reagan administration’s use of Honduras as the logistical center for U.S. counterinsurgency and counterrevolutionary campaigns in Central America, ensuring good U.S.-Mexico relations during the NAFTA negotiations, managing relations with UN Security Council members in the lead-up to the invasion of Iraq, and overseeing U.S. operations in Iraq during the lead-up to elections there in January 2005.[11]

The son of a Greek shipping magnate who emigrated to New York during World War II, Negroponte called his work in Vietnam in the early 1960s a “career-defining experience.”[12] Negroponte quickly ascended from political officer in Vietnam to an aide to former Secretary of State Henry Kissinger by the end of the decade. In 1968, Negroponte became the liaison officer between the U.S. government and North Vietnam’s delegation at the Paris peace talks. In late 1970,  he became head of the Vietnam office of the National Security Council (NSC) staff. In February 1973, he broke with NSC Advisor Kissinger over the  peace negotiation process, which Negroponte said did not guarantee the security of the government of South Vietnam.[13]

During the Reagan administration, he served as ambassador to Honduras, at a time when that country was serving as a command center for U.S. support of the Contra war against the Sandinista government in Nicaragua. From his base at the vastly expanded embassy in Tegucigalpa, Negroponte also played a central role in U.S.-led counterinsurgency and anti-dissident operations in Honduras, El Salvador, and Guatemala.[14] During his tenure, the U.S. military base in Honduras became a key logistical center for U.S. military, CIA, and paramilitary operations throughout the isthmus.[15]

At the Cold War’s end, when NAFTA and free trade initiatives had become the major thrust of U.S. policy, President George H. W. Bush appointed Negroponte ambassador to Mexico. Under Clinton, Negroponte became ambassador to Philippines, just as was undergoing a contentious democratic transition and the presence of the U.S. military in the former U.S. colony was being renegotiated.

In the late 1990s, Negroponte joined the private sector as an executive with McGraw-Hill. However, President George W. Bush  resurrected the government career of Negroponte along with several other Reagan-era figures tainted by their connections to the Iran-Contra scandal, such as Elliott Abrams, John Poindexter, and Otto Reich.

As UN ambassador, Negroponte stage-managed the administration’s attempt to persuade the Security Council to support the invasion of Iraq. In 2004 President Bush named Negroponte Washington’s first post-Saddam Hussein ambassador to Iraq, where he supervised what became (after the invasion) the world’s largest U.S. Embassy staff, with more than 900 employees. While in Iraq, Negroponte gave Washington optimistic reports about the country’s progress toward democracy, and according to news reports he fiercely disagreed with CIA reports on the insurgency and prospects for peace.[16]

Negroponte demonstrated a willingness to use his diplomatic status to cover up crimes and misdemeanors. These tendencies—including his role in covering up the crimes of the Contras and the vigilantism of the Honduran armed forces and his silence about gross human rights abuses and corporate crimes in Iraq—were highlighted by critics after his nomination to become the first Director of National Intelligence. Commenting on his appointment to this post, the Council on Hemispheric Affairs (COHA) opined that Negroponte is the “right man for the job but for the wrong reasons.”[17]

As ambassador to Honduras during the Reagan years, he at the very least turned a blind eye toward the illegal flow of arms and other U.S. governmental and nongovernmental aid to the Nicaraguan Contras. Under his watch, the Honduran military and associated paramilitary squads committed a multitude of human rights abuses and executions. After leaving Honduras, Negroponte became deputy national security advisor at the White House. Working with Undersecretary of State for Latin American Affairs Elliott Abrams, Negroponte succeeded in halting U.S. investigations into drug trafficking by Honduran military officials.[18]

Negroponte has repeatedly told the media and congressional committees that it was a myth perpetrated by U.S. critics that death squads operated in Honduras or that the government was guilty of gross human rights abuses. A 1997 CIA Inspector General investigation concluded, however, that “the Honduran military committed hundreds of human rights abuses since 1980, many of which were politically motivated and officially sanctioned” and “linked to death squads.”[19]

A 1995 investigation by the Baltimore Sun revealed that the CIA-trained Battalion 316 in Honduras tortured its captives during interrogations; some of the prisoners were killed and later buried in unmarked graves. A former Honduran congressman, Efrain Diaz, told the Baltimore Sun  that the attitude of Negroponte and other U.S. officials “was one of tolerance and silence. They needed Honduras to loan its territory more than they were concerned about innocent people being killed.” Negroponte’s predecessor as Honduras ambassador, Carter appointee Jack Binns,  said that when he left Honduras, he briefed Negroponte on the escalating human rights abuses.[20]

For its close cooperation with the Reagan administration’s aggressive foreign policy in Central America, the Honduran government was rewarded with a huge influx of aid. Military aid increased from $4 million in 1980 to $77 million in 1984, while economic aid increased from $52 million to $229 million. Had Negroponte informed Congress that the military was engaged in human rights abuses, this aid would have been jeopardized. When Negroponte was named UN ambassador, Reed Brody of Human Rights Watch said, “When Negroponte was ambassador [in Honduras] he looked the other way when serious atrocities were committed. One would have to wonder what kind of message the Bush administration is sending about human rights.”[21]

At the UN, Negroponte tried to persuade the Mexican and Chilean governments to recall their UN ambassadors after they did not agree to support U.S. plans to invade Iraq. According to news reports, during the run-up to the Security Council vote and the invasion, Negroponte  ordered wiretaps and other audio surveillance of his UN colleagues— critics as well as allies.[22]

Critics have repeatedly charged that both as a member of the NSC and during his various ambassadorships Negroponte covered up damaging information so as to further horrific policies and practices. Melvin Goodman, a former CIA official, warned after Negroponte’s nomination as DNI: “Negroponte is tough enough. The question is: Is he independent enough?” Referring to his history in Honduras, Goodman said, “I think of the role of intelligence in telling truth to power,” adding that Negroponte’s appointment “doesn’t fit.”[23]

[17] Council on Hemispheric Affairs, “Negroponte: The Right Man for the Job but for the Wrong Reasons,” Memorandum to the President, February 17, 2005, http://www.apfn.net/messageboard/02-23-05/discussion.cgi.93.html.

[18] For more on these incidents, see Council on Hemispheric Affairs, “Honduran Riots Reflect Far Deeper and More Pervasive Resentment of U.S. Influence than Transfer of Drug Lord to U.S. Authorities Should Have Produced,” News and Analysis, April 15, 1988; Council on Hemispheric Affairs, “Negroponte: Nominee for Baghdad Embassy, a Rogue for all Seasons,” April 27, 2004,http://www.apfn.net/messageboard/02-23-05/discussion.cgi.93.html.; and Ghali Hassan, “Ambassador to Death Squads: Who is John Negroponte?” CounterPunch, June 4, 2004,http://www.utne.com/community/ambassadortodeathsquadswhoisjohnnegroponte.aspx.